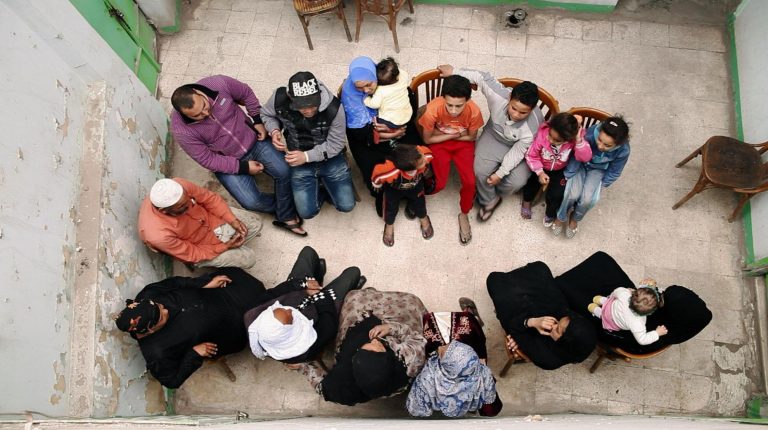 Poverty is not a defect. This is a foregone conclusion but the resistance to social problems caused by poverty is a matter of reflection. This is what happened with the Lebanese-Egyptian director Reem Saleh in her first long documentary film, “Al Jam’aia” (The Money Pool), which was first screened in the Panorama section at the 68th Berlin International Film Festival.

A jam’aia is an original Egyptian savings tool and one of the solutions that the inhabitants of poor and extremely poor areas use to secure their urgent needs. This old mechanism requires a group of people to contribute a sum of money on a daily or monthly basis, according to the agreement, to a trusted person and the members take turns collecting the resulting lump sum according to the priorities of the participating people. The jam’aia tool represents a legitimate solution to the difficulties of life which cannot be settled via regular means, taking into consideration the resources of these families and their basic needs in life.

Saleh chose this original social tool to understand her mother’s will. Saleh’s mother wanted be buried in her family’s graveyard in Rawd Al Farag, Egypt. Therefore, Saleh decided to get to know the people of this neighbourhood to learn why her mother insisted to be laid to rest in that place. She wanted to know what is it about this neighbourhood that makes her mother unable to forget it, even after getting married to a Lebanese man and moving outside Egypt.

Saleh’s choice was successful as it helped her not only to monitor families and their association with this savings tool, but also to gain deep insight into those people’s souls and their perceptions of life. Despite all the difficulties that intercept those people, they still stick to hope and the desire to live. They still laugh, dance, and use the jam’aias to save money for weddings, where they can experience happiness.

The jam’aia was also a manifestation of other social practices, which contributed greatly to the complexity of those people’s lives. Saleh used her camera to monitor some of these practices without bias. Instead, she helped the viewers to build their own opinions based on the incidents of the film. For example, Saleh focused on the multiple marriages of Ibrahim—Dunya’s brother—and his divorces for absurd reasons. She also monitored some women’s tendency to prioritise their motherhood instinct through the story of Umm Yassin, who divorced three times. Umm Yassin gave birth to many children simply because she loves children and finds happiness in raising them without even thinking if she and her husband can afford that process amid very harsh economic conditions. Umm Yassin relied on the jam’aia concept to cover her children’s needs and provide them with their pre-university education.

Another example of women living in Rawd Al Farag was Umm Gharib who was divorced after a 30-year marriage. Umm Gharib was forced out of her house in Rawd Al-Farag, the house where she spent more than half of her life serving her husband and children in. Umm Gharib did all it took to support her family; she even worked delivering LPG cylinders to houses for EGP 15. Umm Gharib’s husband, Adel, married four other women and refused to meet his children. In an absurd paradox, Adel claimed that he became devout, as if God can accept what he did with his children’s mother!

Saleh’s film went beyond the implementation of her mother’s will to reveal the social conditions of Rawd Al Farag’s inhabitants, many of whom still believe in old traditions we thought had vanished a long time ago. For example, a girl who is less than 10 years old insisted to undergo female genital mutilation despite the opposition of her parents! The film raised a question concerning the awareness and cognitive level of this social class, and to which extent this awareness exists. Through her film, Saleh investigates whether this awareness is present, or if its absence is the real problem.

Egypt’s production of LPG increased by 31,000 tonnes within 4 months

GoEast festival kicks off with focus on Eastern European women

Football, power and politics at the 11mm Film Festival