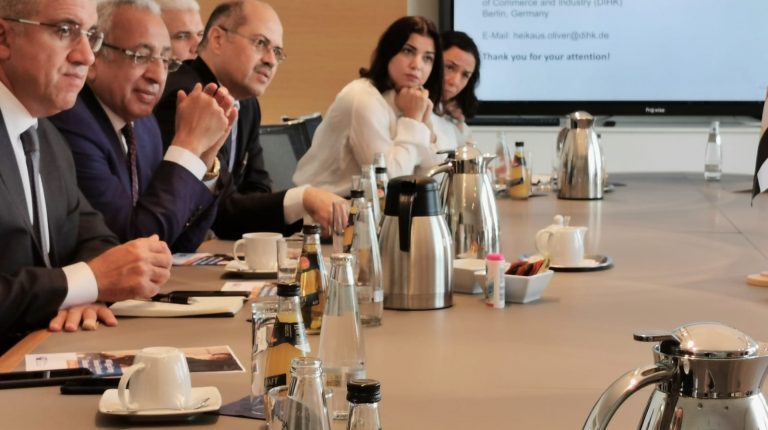 Berlin– A delegation of major German automotive manufacturers will visit Cairo in December to discuss investment in the automotive and feeding industries sector, according to Managing Director of the German Association of the Automotive Industry (VDA), Kurt-Christian Scheel.

During a meeting held yesterday within the delegation of the Federation of Egyptian Industries (FEI)’s meetings chaired by Mohamed El Sewedy, Sheel stated that they are working to include more companies in the delegation. He added that Egypt is an important market for the German carmakers, given the huge population and the easy access to other countries from there.

The VDA has more than 600 companies working in the industrial sector, pointing out that the African market was not on the map of German companies during the last period. However, they have recently started to change their view because of the Egyptian market, which became the top priority for German companies.

The delegation of the FEI also met President of the Federation of German Industries (BDI) Dieter Kempf, during the visit which began on Monday. They discussed increasing cooperation in the field of exchange of expertise in the industrial sector. They also stressed that Egypt is a promising market for German investments due to the availability of human element and improved infrastructure.

During the meeting, Kempf invited the Egyptian delegation to participate in the Hannover Industrial Fair, the largest specialized exhibition in the manufacturing industry in the world to show their successes, allowing foreign companies to identify their needs and their strengths, offering opportunities for bilateral partnerships.

El Sewedy said that the Germans have extensive experience in the field of accreditation, conformity certificates, and technical training, stressing that Egypt needs to cooperate with them during the coming period, in order to expand the accreditation centres in the Egyptian market and revitalize the industrial sector. Thus, contribute to the improvement of the ranking of Egypt in doing business.

During a meeting between the FEI and the VDA, El Sewedy asked the German side to help draft a legislation to develop and organize technical education in Egypt, given that it is the most important pillar of the industrial sector in general, pointing out that about 60% of Egyptians are in the youth category. Recently, Egypt has allowed the private sector to manage and develop technical schools. “We believe that there are significant opportunities in this area in the coming period,” he added.

Minister Plenipotentiary at the Egyptian embassy in Berlin, and Head of the commercial office in Berlin, Maher Elsherif, said there is a large number of German companies operating in Egypt. “We have to offer successful partnership models to show on the German side, urging companies to invest,” he added.

He explained that there is a good investment climate in Egypt, yet not many German investors know what the Egyptian government offers to foreign investors.

For his part, CEO of the German-Arab Chamber Jan Noether said that Egypt is distinguished from the countries of the region by having a diversified economy, which requires placing Egypt on the map of German companies in the next 20 years. This will capture a larger share of Germany’s total investments in the African continent, which remains under 1%.

He pointed out the importance of marketing the success stories of German companies operating in Egypt by presenting them to German investors who are not familiar with Egypt’s investment opportunities.

Noether referred to the visit of Prime Minister Mostafa Madbouly three months ago as good and supportive for the cooperation between Egypt and Germany. “I think that the current time is the most appropriate for German companies to come to Egypt,” he said.

Concluding the second day of its visit, the delegation met with representatives of the German Health Alliance, where they discussed the possibility of German companies operating in the health sector to cooperate with Egypt.

Tarek Tawfik, FEI’s Vice-Chairperson and member of the delegation, said that Egypt signed three agreements earlier with US companies In the field of health. Yet, it still needs more partnerships to develop the health sector in Egypt, pointing out that Germany is one of the most important candidates for this type of partnership.

What procedures does Egypt need to take to attract more investors?

FEI concludes its visit to Berlin, awaiting a series of bilateral meetings on digital development