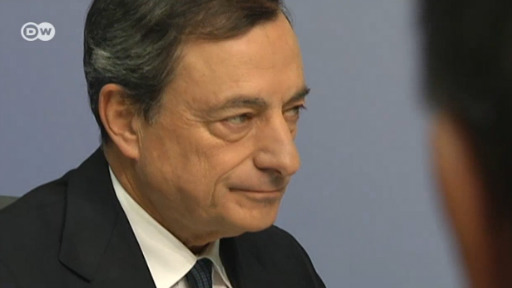 The governing council of the European Central Bank has decided to leave its current interest rates unchanged.

This comes despite mounting criticism from eurozone lenders over shrinking profits.Meeting in Frankfurt on Thursday, policymakers at the European Central Bank agreed to not make any changes to the lender’s record-low interest rates and cheap loans to banks across the 19-member euro area.

The ECB said its benchmark financing rate would remain at zero percent. However, analysts predicted that at a press conference later in the day ECB President Mario Draghi might prepare markets for an extension of the bank’s huge monetary stimulus program amid talk that massive bond purchases might be drying up.

Earlier this month, investors were spooked by a Bloomberg report suggesting that the ECB was considering gradually phasing out its asset-buying scheme due to end in March in a process called tapering.

The Frankfurt-based bank was quick to deny the report, but it pushed up bond yields anyway and served as a reminder of how volatile sentiment remained regarding the currency bloc’s economic prospects.

“It’s too soon for the ECB to provide any guidance on its exit strategy,” Berenberg economist Florian Hense said in a statement, pointing out that the lender’s ultra-loose monetary policy had been a critical pillar of confidence in the eurozone.

But the bond-buying program may be in danger for technical reasons. The ECB’s governing council has tasked some committees to examine ways to avoid running out of bonds to buy.

Its own rules prevent the bank from purchasing bonds with a yield below the rate of interest it pays on deposits, currently -0.4 percent. In addition, it’s not allowed to buy too many bonds from any one issuer in a bid to protect against potential accusations of monetary financing of government spending.

ECB governors looked likely to put off any stimulus decisions until their December meeting, with several potential upsets on the calendar next month.

There’s the US presidential election coming up, but also a constitutional referendum in Italy with Prime Minister Matteo Renzi under pressure.

And lurking in the background is the unquantifiable damage to eurozone economies from the UK’s vote to leave the European Union. Britain was the euro area’s second-largest export customer after the US in 2015, buying 13.5 percent of the bloc’s goods sold abroad.

ECB board meets amid rise of imponderables