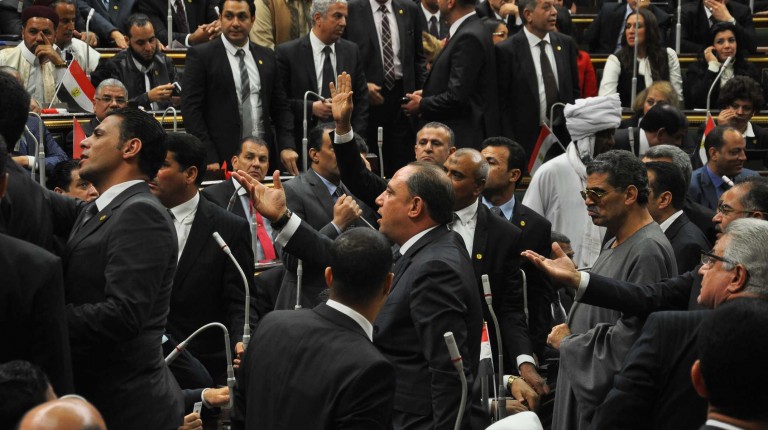 An unexecuted verdict by Egypt’s highest judicial court—that would see a member of parliament’s membership nullified—has raised concerns about the parliament’s commitment to abiding by the Constitution.

Surprisingly, El-Shobaky’s lawyer Islam El-Dabh claimed that as the court recounted ballots, “it found at least 27 voting cards marked in favour of Al-Shobaky put in the box belonging to Mansour”.

Several details of the issue could further question the integrity of the entire electoral process six months later, which different local and international election observers had assessed as “transparent”.

According to Article 107 of the Constitution, the parliament is obliged to adhere to the court’s decision upon receipt.

However, the parliament has neither cancelled Mansour’s membership nor suspended him from attending sessions—nor have they accredited Al-Shobaky as an MP. Parliamentary speaker Ali Abdul Aal has referred the issue to parliament’s Legal Affairs Committee. The constitutional article was introduced particularly to counter the parliament’s monopoly over the status of its members, which was practiced in previous Egyptian parliaments.

El-Dabh criticised Abdul Aal. “The parliament is obliged to adhere to the court’s decision, and the verdict is the first real application of the Constitution. The verdict was clear about El-Shobaky’s right to the parliamentary seat,” he said.

Moreover, Abdul Aal claimed to have received another document by the same court, asserting the validity of Mansour’s membership. Despite the speaker’s expertise in constitutional and legal affairs, the court had to issue a clarification statement.

“The speaker’s referral of the case to the Legal Affairs Committee will be no more than a procedure. The parliament is obliged to adhere to the court’s decision,” argued constitutional professor Ramadan Bateekh.

The two rival candidates intensely competed in runoff elections over the constituency of Dokki/Agouza in Cairo. Mansour, son of notorious lawyer and president of Al-Zamalek Football Club Mortada Mansour, had also led a distortion media campaign against El-Shobaky.

The Cassation Court’s verdict was decided in a case where El-Shobaky had appealed election results that brought his rival candidate victory in Cairo’s constituency of Dokki/Agouza, following heated competition in November 2015.

Interestingly, the court’s decision in favour of Al-Shobaky was based on a recount of the votes, which revealed that he had more votes than Mansour, which could also raise suspicions not only on the accuracy of voting counts in the constituency, but also across the nation, according to Ayman Okeil, director of Maat for Peace and Development.

Okeil confirmed in Wednesday statements that, in previous parliaments, the court’s decision regarding memberships could be easily disregarded by the parliament but that the 2014 Constitution settled the debate, wondering why El-Shobaky’s verdict has not been implemented yet.

“This could raise many suspicions with regards to other constituencies which also witnessed heated competition,” Okeil said. Commenting on claims made by El-Shobaky’s lawyer, Okeil said: “They were dangerous and imply that a problem of transparency of the ballot boxes occurred.”

“There is a difference between an error in vote counts and finding one candidate’s cards counted in favour of his rival,” he said. “If this is the case, then there was corruption on behalf of the employees or judge performing the count, and in the bigger picture this also puts responsibility on the entire chain of command,” Okeil stated.

The constituency in question was under the responsibility of Judge Nagy Shehata, who has also enjoyed a notorious reputation following his work in several political trials issuing mass death sentences against alleged Islamist affiliates. Shehata was ordered to step down in one case after he made press statements considered by the court to contain “bias against the defendants”.

Election observers and members affiliated with each candidate attend the count process in each polling station. Asked about how card manipulation could occur in their presence, Okeil said that the person announcing the count could fail to properly show each and every card to the attendees, who might also not pay enough attention.

Okeil asserted that there were no complaints regarding any of the candidates’ affiliates being denied entry to monitor the counting process in Agouza/Dokki constituency. “The practice would have automatically annulled the count on grounds of lack of transparency,” he explained.

Despite that, the Mansour-Shobaky issue could open doors for questions on the electoral process; Okeil said there would be no mechanism to bring such a case to court. While MPs are able to appeal against electoral results before court, they are required by the Constitution to do so within 30 days of the announcement of the final elections results.

Parliament to discuss proposal to eliminate religion from IDs

Behind the scenes of Egypt’s first parliamentary session