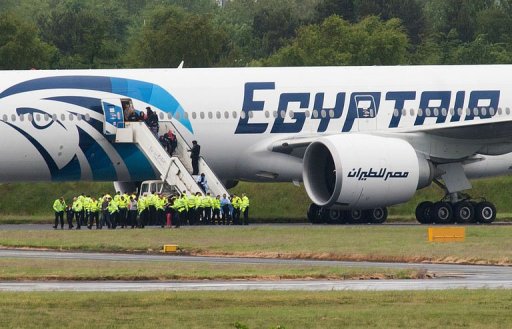 A few hours after EgyptAir flight MS804, flying from Paris to Cairo, went off radar early on Thursday morning, scenarios began to emerge for the reasons behind the misfortune that took the lives of 66 people.

The Egyptian and French governments have not yet come to a definite conclusion on what brought the aeroplane down. However, the possibility of a terrorist attack has not been ruled out.

In a press conference on Thursday, Egyptian Civil Aviation Minister Sherif Fathy bizarrely favoured “beautiful-looking theories that suggest this is a terrorist operation”, over “other theories I read that don’t look so beautiful and suggest this was technical failure”.

Limited information has been verified about what happened to the Airbus A320-232 jet. However, leaked Aircraft Communications Addressing and Reporting System (ACARS) messages from the aeroplane indicated there was smoke detected in the lavatory and a sudden increase of temperature near the cockpit window, according to the Aviation Herald which says it received information through three independent channels.

It was also reported that the aeroplane took “two sharp turns” before it fell into the Mediterranean Sea.

The ACARS messages, an automated messaging system between the aeroplane and the ground station, published by the Aviation Herald, ran for three minutes during which the crew did not send a distress signal, which has raised doubts over the theory.

Graham Braithwaite, a professor of Safety and Accident Investigation at Cranfield University, believes this is certainly possible as their first priority would be to deal with any in-flight emergency rather than sending a message to ground operations.

“If there was a fire then it would have necessitated swift action which may include opening the cockpit window in an attempt to clear smoke. In that case there would be a lot of noise and communication would have been difficult,” Braithwaite told Daily News Egypt.

He recalled what happened in 1998 when a fire broke out on Swissair flight 111 and the crew faced an “unimaginable task” of trying to stay at the controls while fire and smoke entered the cockpit. The aeroplane crashed into the Atlantic Ocean, killing all 229 passengers and crew on board.

“Pilots say the priority for an in-flight emergency is ‘Aviation – Navigate – Communicate’. In other words, fly the aircraft first, figure out where to go and communicate your intentions in that order,” he added.

EgyptAir pilots told Daily News Egypt on Thursday, on condition of anonymity, that the crash could have occurred due to technical failures which also prevented the aeroplane’s distress signal system.

One pilot said on Saturday, following the emergence of photos from the aeroplane’s debris, that there were burnt items among the wreckage. However he says this cannot indicate whether it was a fire or a bomb.

Regarding the two sharp turns of the plane, Braithwaite believes that there are many reasons for this “assuming the data is valid”.

“It could point to anything from an input from the flight crew, to someone else on board, or to a loss of control of the aircraft. It may have started as something intentional—if the aircraft is on flight and needs to depressurise to open a window then it needs to get down to 10,000 ft as soon as possible, for example,” he said.

The Egyptian minister’s statements—which could be seen as bizarre as they sound if we do not take into account that a terrorism scenario averts the blame from Cairo—were not the only indication that a terrorist attack could be behind the misfortune. The sudden disappearance of the aircraft and the absence of a distress signal from the crew strongly suggests this theory, especially as the crash comes seven months following the crash of a Russian flight that flew from Sharm El-Sheikh airport over Sinai as it was downed by a home-made bomb, according to a Russian report.

“The aeroplane was fully technically detected at Charles de Gaulle airport before it took off,” security analyst Khaled Okasha said on Friday.

He asserted that all security procedures, starting with searching the aeroplane staff and their belonging, were conducted by French security personnel.

“The take off port is fully responsible for the technical and security status of the aeroplane. This is not averting responsibility as these are the international laws of aviation,” he added.

Investigators and search teams from Egypt, France, Greece and Britain have been cooperating to unravel the case.

Yet an important item is missing from the terrorism theory. No group has yet claimed responsibility, unlike in October when the Sinai Province, Egypt’s Islamic State affiliate, claimed that they had downed the Russian aeroplane.

CBS News quoted anonymous sources from the Egyptian government on Tuesday as saying that search teams discovered “data recorders” belonging to the aeroplane.

The Egyptian government, however, has not publically announced that the flight’s black box has been located.

The flight data recorder should provide far more detail about the aircraft and its state leading up to the accident—assuming it can be recovered and is not damaged, according to Braithwaite who believes that it should be able to withstand an event like this, but first it needs to be found.

“In the Air France AF447 crash in the Atlantic, it took two years to find and recover the recorder. The voice recorder should tell us a lot more about what was happening on the flight deck—again assuming it us found in a readable condition,” Braithwaite added.

“As I work mainly in the world of accident investigation, we try not to rule anything in or out without evidence,” Braithwaite concluded.

India’s Lava to inject $10m investments into Egypt this year