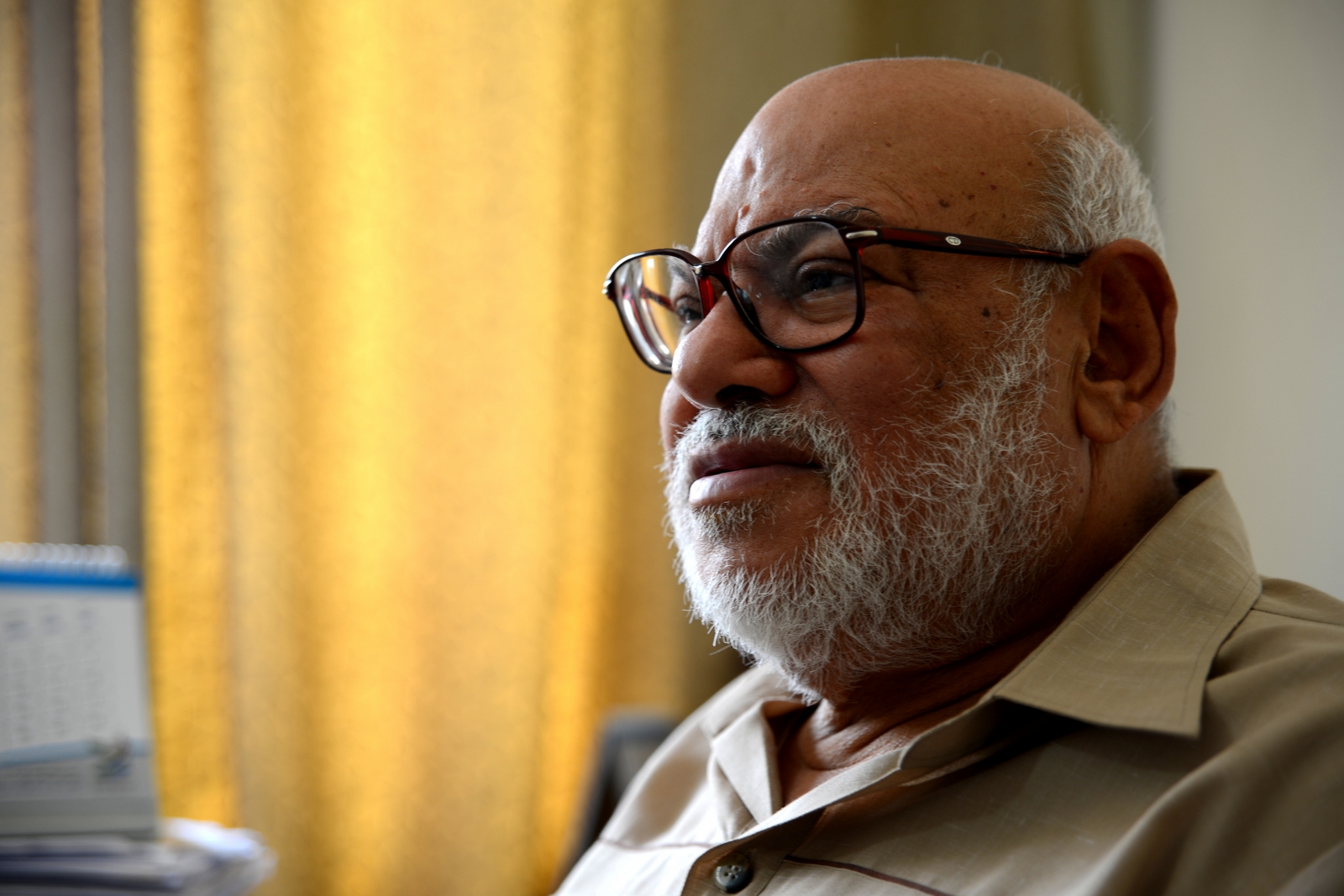 Not many people have spent more time in the Muslim Brotherhood as Kamal Helbawy. The 75-year-old spent decades in the Gulf, Pakistan, and Afghanistan leading Brotherhood-led educational initiatives, before moving to London, becoming the group’s official spokesman in the West. After more than 60 years, Helbawy left the Muslim Brotherhood following his return to Egypt in 2011 and has been an outspoken critic of the group’s leadership and political choices.

In 2013 he was made Deputy Chairman of the Constituent Assembly that amended the 2012 Brotherhood-approved constitution and openly endorsed former military chief Abdel Fattah Al-Sisi’s presidential run.

Helbawy maintains that the current Brotherhood leadership has “deviated” from its original path, leading to its falling out with the general public. Daily News Egypt speaks to the former senior Brotherhood leader about the group he participated in for more than six decades and what he thinks the future holds for it.

You spent a long period as an active member of the Muslim Brotherhood. When did you join and what drew you towards the group?

I joined in 1951 in Shibin El Kom in the Delta region. The political parties, groups and movements used the older generations in schools to try to [recruit]. The most important ones at the time were Al-Wafd Party, the Socialist Party, and the Muslim Brotherhood. But the Muslim Brotherhood was not a party. It was just a movement working in relief, da’wa, education, and development. The senior leaders of the groups in the school [recruited] the newcomers and explained them the group. So, I picked the Muslim Brotherhood because their motives, aims and aspirations were closer to our younger hearts at the time, especially coming from a rural farming family with its traditions and commitments to the mosque and to Islam. It was appealing to me.

Throughout your experience with the Muslim Brotherhood, you were able to participate with it on an international level as well.

After 1972 I was selected to run the World Assembly of Muslim Youth (WAMY). I was the first executive director and we had to spread globally by establishing camps for youth and introducing Islam to them, providing them with books and activities, and to take care of Muslim youth and student associations. This gave me the chance to work globally.

After that I worked as an adviser to the global organisations department in an office in the Gulf supervising education and upbringing in the Gulf area. I spent six years as well in Afghanistan and Pakistan and was adviser to the Institute of Policy Studies in Pakistan.

In the 80s or early 90s, Mubarak issued a decree [ordering] the questioning and interrogation of those coming back from Afghanistan, which meant that if you came back [to Egypt] you would be sentenced and put in prison. So, I moved to the United Kingdom and there I became the spokesman for the Muslim Brotherhood in the West and ran the media centre for the Muslim Brotherhood in the UK.

Of course we were against Mubarak and his regime and after the 25 January Revolution and the resignation of Mubarak on 11 February 2011, I started to think how I should return [to Egypt]. Things were arranged and I came back on 5 April 2011, one and a half months after the revolution.

Now you have become a vocal critic of the Brotherhood after 2011. What criticisms did you have and when did you officially leave the Muslim Brotherhood?

For one year after I came back, I stayed in the Muslim Brotherhood, but I noticed some deviation from the curricula and from the way we were brought up to be members. I noticed that the Muslim Brotherhood joined the revolution late and left early, and they concentrated more on the parliament and politics than on the revolution and its aims. I also noticed that they would not run in elections for the presidency but later on broke their promise. I think if you break your promises, you can’t be trusted and you will never succeed.

Last December the government categorised the Muslim Brotherhood as a terrorist organisation. How did you react to this development?

The leaders of the Muslim Brotherhood allied with Al-Jamaa Al-Islamiya, Al-Jihad, and other Salafis in Rabaa Al-Adaweya, made an alliance “to support legitimacy” and used violence. They did not accept the will of the people who went out on 30 June, who were asking for early presidential elections and had [previously] only asked to change the cabinet, but did not receive a response. Two days before 30 June, they… went to Rabaa and Nahda and began to divide society through fatwas. The “alliance” groups are not big, but the Muslim Brotherhood is the leader. So, it was expected that they were banned at first, because of violent demonstrations and because of the [violence] and [explosions] in Sinai. [The Brotherhood] are the only ones that can bear the consequences.

But I do believe that as a group they were considered a [terrorist organisation], but not as individuals.

Do you think the Brotherhood will ever return to the political fold?

It takes time. I said in an interview that it would take at least ten years. Their problem now isn’t with the government or the regime or the army. It is with the people. A large portion of the people is against the Muslim Brotherhood for the first time in its history.

How do you feel about the way security forces dispersed Rabaa Al-Adaweya last summer?

We put out a report through the National Council for Human Rights. In the report, it was clear that the Islamists insisted to stay and blocked the roads and were preparing for a battle, and had some arms inside [the sit-in]. So the army and police had no other way. I do not agree with killing, but I once said: if wise people see a train, they will not stand in front of it. They will move. But they stood in front of the train.

Do you think what the Brotherhood is going through now will radicalise it?

The Muslim Brotherhood now is divided into three groups. One group is following the leadership and has reverted to violence to the extent that some like Ahmed Al-Mogheer [an Islamist youth activist] said “we are sorry Bin-Laden that we did not follow your example a long time ago.”

There’s another group that doesn’t know where to go. They have stopped and are not listening or doing anything.

The third group condemns the violence and will never take action in demonstrations and violence, but they need a way to work in this society. And this is the largest group.

Do you think that this third group is the future of the Muslim Brotherhood?

Yes, but not under the name of the “Muslim Brotherhood”.

The history of the Muslim Brotherhood is a history of struggles and crackdowns. What is different about what the group is experiencing now versus previous times? Do you think it’s different at all?

Yes, it is different. They never used violence as a group in spite of the fact that a few members used violence during the time of King Farouk and during the time of [Gamal Abdel] Nasser. But they never used violence as a group in their curricula or education or upbringing. This is why people loved them and had sympathy for them. But the case now is different. There is a group inside the Muslim Brotherhood that are not happy with the peaceful way and they want to use violence for power. And that’s why a large group of the population are against them. The leadership deviated from the route of Hassan El Banna and his curriculum. They are more Qotbist in their way of looking at society.

Given your long history with the MB, could you see yourself playing a role in any type of reconciliation?

I tried during the time of Rabaa, but they refused. We had more than 20 meetings with top leaders of the Muslim Brotherhood, including Dr Mohamed Ali Bishr, but unfortunately nothing materialised. They were insisting to coming back to power by force, what no one would accept.

The Ministry of Interior has attempted to connect the Muslim Brotherhood with militant groups like Ansar Beit Al-Maqdis. Do you think there is a connection?

I don’t know. You can’t know until you have their full files. I don’t know if there is a connection, but the courts will know when papers are submitted and they can decide if a connection exists.

You were deputy chairman of the constituent assembly that wrote the current constitution. What in it do you think is an improvement, especially from an Islamic way of thinking?

The second article confirms that Islam is the religion of the country and that Arabic is the official language. The principles of Sharia are the main source of legislation. So, any laws that may be drafted against Islam will be rejected. This is the best constitution that has been done, especially in equality between men and women for the first time and between Muslims and non-Muslims as citizens. [It also cares for] the disabled and Egyptians abroad and representation of women and Christians in parliament and local assemblies. It concentrated on education, health care, social assistance, and scientific research as well.

You supported Field Marshal Abdel Fattah Al-Sisi as president. What makes you think he would make a good president?

The country is in need of a good leader. In the army they are punctual and well organised. Secondly, [Al-Sisi] has a vision. Our country was going to become another Syria and he and the military forces saved the country with the people from becoming another Syria. He is very polite, neat, and pious- a good Muslim. We met a few times and he is very close to the people. When we were discussing, he only spoke in his turn.

Whether he’s in power or not, the people love him and I think he will be able to help the country.

When Al-Sisi becomes president, would you accept any role in his government?

Not as an executive. As an adviser, yes. I am over 75 and it is better to write and advise orally or written. They need the younger generation to work in executive posts. But if they need any advice, I’m ready to give it.

The past year has been very unstable and violent. Do you think things now would have been worse if Morsi had stayed?

Morsi released many prisoners who were criminally tried and sentenced. On 16 June 2013, just two weeks before the [30 June] revolution, he called on Egyptians to go to Syria and support jihad in Syria. So, as a president you are going into a conflict with another Arab country. They would not be silent and they would sent people to do jihad in your country. Morsi only trusted his own people and the Islamists, and they did not pay much attention to the future of the country.

In 2012, you supported another former Muslim Brotherhood member, Abdel Moneim Abul Fotouh, in presidential elections. What are your thoughts on his current positions?

Since then he has participated with his party, but it is still new with youth who lack experience and financial support.

Do you think the current government is having trouble reaching out to the youth?

You were secretary-general of the Forum for Islamic Unity, which promotes Sunni-Shi’a understanding. How do you think Egypt should handle Sunni-Shi’a tensions?

There are extremists in Egypt, just like in Iran. Extremists are not good for any religion or political [system], so we need to bring an understanding among people to accept each other.