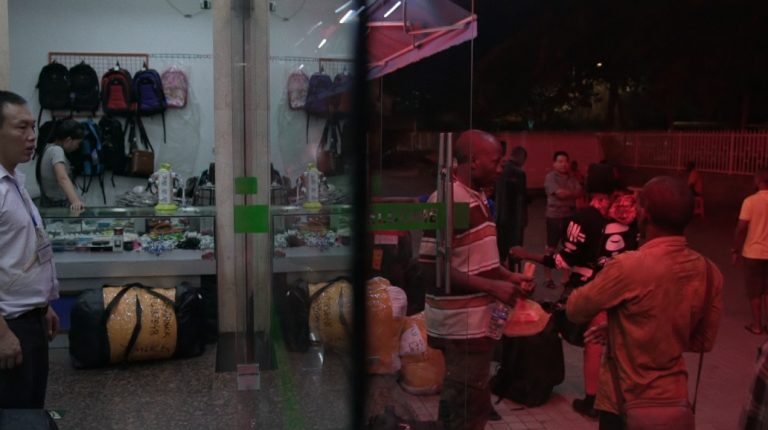 In a continuation of previous work tackling social conditions and daily lives in Leosotho, documentarian Teboho Edkins presents his fifth feature, Days of Cannibalism. Edkin’s latest production is presented in hybrid format, mixing documentary with some fictional and experimental elements.

In the film, Edkins considers how migratory patterns open up new opportunities for the Far East to flex its gigantic industrial power. The film had its world premiere, earlier in 2020, in the panorama section of the 70th Berlinale.

For most of his career, Edkins has had a special interest in following micro changes happening in the southern African continent. His first film, Ask Me, I’m Positive, follows young Basotho infected with HIV, whilst a later production, Gangster Project, trails the daily lives of gangsters in the South African coastal city of Cape Town.

Although born in the US, Edkins has become a citizen of the world via his upbringing, having grown up in different parts of the world, including Lesotho, Germany, France and South Africa. He shrewdly observes happenings in Lesotho, and tries to connect his findings with the wider aspects of the world’s socio-political status.

Most of the film is shot in Lesotho’s Thaba-Tsaka, an area slowly being taken over by Chinese businessmen who open supermarkets, and construct factories. The native residents are simple folk who depend on trading cows and horses.

The Chinese are more experienced in the ways of business (and the world), and pay the natives low wages. This creates a form of conflict as the natives, aware they are being cheated but helpless about the situation, resort to violence.

Edkins does not tell the story through traditional documentary means. Rather, he invents a more interesting, spontaneous style that is entirely his. Instead of a voice-over narration, he makes use of a radio station’s “on air” personality interacting with their audience. He also uses inserts from real surveillance cameras, which leaves viewers unsure of what is real and what is fiction.

This manipulation between fiction and reality also helps Edkins evade definite conclusions, as he attempts a clinical detachment. This latter move is all the more curious, considering that it is quite obvious where his sympathies lie.

Aside from the film’s loaded title, Edkins’ choice of taking on tropes common to the film Western, a genre related in film history to the exploitation of one ethnic group by another, hints at this.

This story emanates from the Talent Press, an initiative of Talents Durban in collaboration with the Durban FilmMart. The views of this article reflect the opinions of the film critic, Mohammed Tarek. The Durban Talent Press 2020 is mentored by Djia Mambu and Wilfred Okiche.