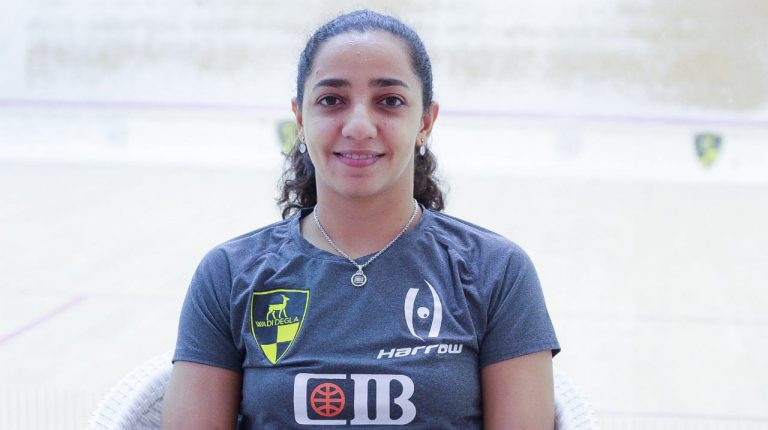 When she hit the ball for the very first time, she knew that squash is what she is meant for. Fascinated by the game since she was just six years old, Squash Champion Raneem Al-Welily paved her way to become the world’s number one Squash player.

In light of the CIB PSA Women’s World Championship 2019-2020 and CIB Egyptian Squash Open taking place at Pyramids of Giza from October 24 – November 1, Daily News Egypt met with the Wadi Degla champion to learn more about her journey, the squash field, and future expectations.

First, tell us how your story started with squash?

I have been practicing squash since I was six. My brother also played squash a year before me. Racket games always attract children. When I was watching my brother playing, I really wanted to try it, so his coach allowed me. When I hit the ball for the very first time, I knew that’s what I wanted to do.

How did your athletic career come about since then?

How was the transition from junior to women competitions?

When I was applying for universities, my family decided to move from Alexandria to Cairo, which affected my career.

The game in Egypt was also going through a difficult stage after the retirement of outstanding players. I was enrolled in a university in Cairo and played for Heliopolis club in 2008. I was not successful in the foreign tournaments I was participating in. It was until early 2009, when I was able to make remarkable progress in my career.

What does it mean to you to reach top rankings and win world championships?

I am now 30 years old and have won more than 23 tournaments, but the World Championships remain the most important to me. I managed to win in 2017, as it is any athlete’s dream. Eventually, I was able to rank first globally in 2015, and I was the first Egyptian to occupy this rank in any sport. I did not realize the importance of that achievement at the time, but now I see that I made a great achievement. There were ups and downs and it was a long journey that I enjoyed a lot.

What about your future plans?

I don’t have future plans. I always take it one day at a time, and make sure I do my best.

Every great journey has its ups and downs, can you tell us more about the challenges that you faced in your career?

There are always difficult times for any athlete. I used to call them “black moments”. For me, these periods always push me to do better. I always adjust my plan to prepare for better things. I have always seen the Malaysian professional squash player Nicol David as a puzzle, given that she has been able to achieve over the years. She is a true legend.

Do you see yourself as a legend?

I don’t see myself as a legend. I don’t think about it. I keep telling myself that I won the World Championship and that’s what I want.

Do you feel that you have deprived yourself of things compared to others your age?

I feel that I have lived a beautiful life that I have been happy with. I have made sacrifices for sure, but in return, I have achieved great things.

What about your personal life outside squash?

I am married. My husband is Tarek Mom’en, the world No. 3 in squash. We have a wonderful life. We play the same game and have the same schedules. We travel together for tournaments, we endure the stresses of life together, and this makes it easier for us in a lot of things. For me, family and friends are the most important. As long as I did my best, then I am very happy. With regards to raising children, it will happen at the right time. Some can give birth and go back to playing and others can’t. I believe that whatever I do, I should be 100% focused. Having children is a responsibility, not an easy decision.

Do you train with your husband?

No, we don’t train together. There is a big difference between our levels. Of course, men are physically stronger and faster. I can beat players at the age of 17. I can compete with those who are 19 years old, but other than that would be difficult.

Moving between Sporting, Heliopolis, and Wadi Degla clubs, what’s the difference you noticed between them?

At some point, I discovered that the clubs are mainly social, making you deal with the entire management board. I just want to play without going into details and approvals from the board regarding my contracts.

What does Wadi Degla offer you?

Wadi Degla brings me psychological comfort, which makes any athlete productive. The club offers me quality trainings under coach Karim Darwish, and we rely on him completely. I ranked first when I played for Wadi Degla. I aim to continue with the club, as I’m happy there.

Is squash a profitable game?

Squash is profitable for the top ten players in the world ranking only, as long as you are still playing, not after retirement.

You will compete in the CIB PSA Women’s World Championship in the shadow of the Great Pyramid of Giza, what does that mean to you?

I was dreaming of the return to the Pyramids tournament. It is a new challenge for me. I used to watch former squash legend Ahmed Barada playing and observe the interaction of the spectators in the tournament. It was a great experience. I used to travel from Alexandria to watch him. I did not expect that I would play one day at the same place.

What do you expect of the competition in the tournament?

I expect a heated competition from everyone, and from the first game. Draws will definitely dominate the tournament. For the PSA Men’s World Championship, I hope my husband Tarek Momen wins the championship.

What do you think helped you to be World No. 1?

When I was young, they told me that I was talented in squash, but talent alone is not enough. There must be diligence beside talent. Diligence cannot make something without talent, but talent and diligence together can do everything.

Egyptian women festival “Haya Masrya” to be held in November