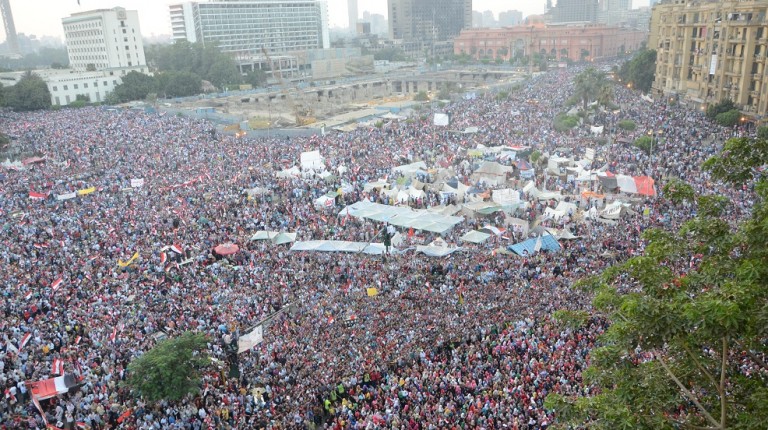 Egypt’s state bodies and politicians have commemorated the sixth anniversary of the June 30 uprising in different statements, which took place in 2013 and resulted in the removal of the Muslim Brotherhood’s rule.

Prime Minister Mostafa Madbouly affirmed on Monday that the June 30 uprising is the reason behind development projects that are carried out in all state sectors.

During a press conference, Madbouly described the June 30 demonstrations as an uprising of “course correction” to all situations before it.

Earlier on Sunday, President Abdel Fattah Al-Sisi described the days of June 30 uprising as one the greatest periods in Egyptian modern history.

Al-Sisi said in a televised speech that the armed forces and police, supported by Egyptians’ will, have managed to protect the country from falling into chaos and conflict. He also affirmed that “Egypt succeeded in destroying the infrastructure of terrorist groups which tried to undermine the country.”

Moreover, the Foreign Ministry’s Spokesperson, Ahmed Hafez, said in tweet that the impact and the significance of Egyptians’ achievement during “the glory 30 June uprising” mounted in its sixth anniversary. Hafez added that Egypt has gone ahead in its path of stability and development despite the challenges.

Earlier on Saturday, Pope Tawadros II of Alexandria applauded President Al-Sisi and Egyptians on the occasion of the sixth anniversary of the June 30, 2013 uprising.

Pope Tawadros II said that the uprising protected the country from “disruption”, adding that the armed forces and police safeguarded the uprising and paved the way toward stability.

Tens of thousands of Egyptians headed to the streets and Tahrir Square in Cairo on June 30, 2013, demanding the toppling of Islamist President Mohamed Morsi’s rule. Morsi, who came to power in June 2012 was eventually ousted from power on July 3, 2013. Morsi passed away last month from a heart attack in a courtroom during his trial season.

Mayor of Istanbul should hand over Muslim Brotherhood members in his city to Egypt, says Egyptian MP

Detention renewed for defendants in ‘Plan of Hope’ case

El-Lahun Pyramid to be opened for 1st time