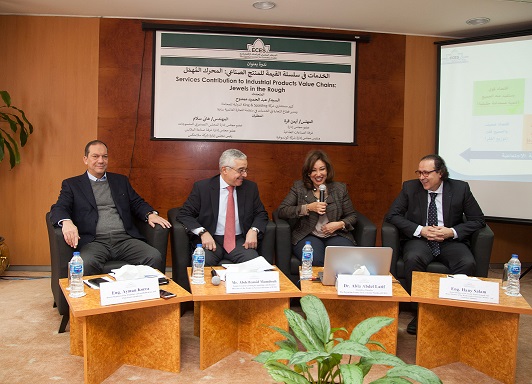 The Egyptian Centre For Economic Studies (ECES) held a seminar on Wednesday concerning the services in the value chain of the industrial product, in order to discuss the influence of services in the product cost.

Abdel Hamid Mamdouh, senior advisor at King & Spalding Law Firm, and former services trade director at the World Trade Organisation (WTO), said that prior to the WTO there did not exist a definition for the services trade and the role of services in the industrial sector was vague. He added that even though the situation is currently better, some governments do not yet have a clear vision of the size of the services sector and its contribution towards the economy.

He cited the importance of the sector to the US where it contributes 83% to the GDP. Furthermore, Mamdouh highlighted a study prepared by China on the cost of bread which indicated that services account for 72% of bread production costs, hence, improving services will improve the product quality and decrease its price.

Moreover, he said that a study conducted in 2010 on vegetable production in Egypt estimated that 30-40% of production is lost. For tomatoes, the ratio reached 60% given the fragile nature of the crop. He noted that the lack of services throughout the production stages contributed to this loss.

During the seminar, the ECES presented two studies on the contribution of services in the value chains and the cost of the product in the garment, food processing, and agricultural processing sectors. The two studies revealed that Egypt suffers from ineffective provision of many services for the garment and food industries, such as customs services, management of production services, transport and storage services, weak design processes, and harvesting, all of which result in higher production costs and lower competitiveness.

The study concluded that there are specific problems related to the size of the project. There is a general consensus that the quality of the services provided is low, and therefore the trend towards integration carries additional costs for the companies, in addition to the problems of the government services in general.

The study presented a set of proposals in order to improve the performance of these services. They included encouraging public-private participation in the field of road infrastructure; the development of a programme to encourage companies owning land transport fleets to modernise these fleets; laying railway lines between ports and industrial zones; operating existing ones; connecting public transport lines to industrial areas; implementing the law with regard to overloads and fines; reviewing the prices of port services announced by ministerial decision number 488 of 2015 and decision number 800 of 2016; encouraging companies to apply quality specifications, and the distribution of a publication containing a list of all laboratories approved and the tests carried out by all companies when they register for industrial licenses.

The study called for the establishment of a fund to insure agricultural crops; the implementation of the Central Bank of Egypt initiative to provide funding for agricultural investments; the development of a simplified system for the registration of agricultural land; the allocation of logistics areas in strategic locations in the provinces including cold storage areas, assembly points and mobilization centres; developing a detailed plan for the Internal Trade Development Authority initiative aimed at establishing commercial and logistic areas in the governorates, and encouraging the public-private partnerships in the field of utilities.

The Textile Industries Chamber board member and chairperson of SalamTex, Hany Salam said that Egypt has an opportunity to create an integrated value chain in the garment industry. He urged the need to separate factories which produce stereotypical products from non-stereotyped products, where the company may not need to spend on design.

He called for more attentiveness to the technical training of the labour force, and focusing on the priorities of internal transport for the labour force’s easy access to industrial areas.

As for Ayman Korra, member of the Board of Directors of the Chamber of Food Industries and chairperson of Consukorra, said that Egypt is the fifth country in the tomato production with an annual production of 8m tonnes, of which only 4-5% enters the manufacturing stage whereas loss amounts to 40%.

Korra explained that there is a problem related to the distance between industrial areas and agriculture lands, while there are lands that can be used near agriculture areas to establish agricultural industrialisation zones.

He pointed out that confidence is lost between the agricultural product and the factories, as when the price of tomatoes rises, farmers stop supplying the crop and if the price decreases, factories stop buy the quantity contracted upon, which stipulates the need to activate balanced contractual agriculture.

Furthermore, the agricultural crop doubles its price in the stage between production until it reaches consumers due to a lack of a wholesale market as well as the packaging method, indicated Korra.

Therefore, he called for the establishment of a mechanism to improve and develop the production process, with the cooperation of all parties from the government, the private sector, and civil society, with the aim to determine the responsibilities and the role of each sector to achieve the desired effect.

“The beginning of the solution is to identify the engines of change,” said Abla Abdel Latif, executive director and research director of the ECES. “The future for the service and IT sectors is what we need to focus on.”

She pointed out that this study is just a beginning, calling for the need for companies to cooperate in the study in many sectors, such as engineering, chemical, wood, and other industries to identify the real cost of services in the value chain of the industrial product, and focus on them to solve the problems.