“Crowds in the feast day, the music, decorations, the look, my footstep, the smoke, the door.” With these words a new short movie called “Every Eid’s Film” shows how the feast should be if a young, veiled girl is walking in the street. The movie keeps repeating the same sequence of events, but with different incidents to show how such an image can be tarnished by sexual harassment, which turns every Eid into a disaster instead of a religious celebration.
The movie shows the inevitable threat any girl may experience while walking in the streets during the days surrounding Eid. The terror in the girl’s eyes, the lust in the harasser’s eyes, and the disabled look in the eyes of passers by summarises the critical problem we encounter in our streets nowadays and raises many questions about the solutions. 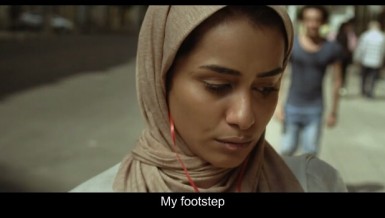 The movie is produced by Axeer Studio under the supervision of the National Council for Women, UN Women Egypt, and the Spanish Embassy and it was released a few days before the Eid, aiming to convey some important messages to the public. The film urges them to play a role in the scenarios of that unfold around Eid and to prevent the inevitable harassment. The movie asserts that harassment is a crime punishable by law; however, laws are not enough as everyone needs to take action because silence makes matters worse.
Although the movie’s innovative idea of addressing the sexual harassment problem attracted praise, some people accused Zap Tharwat, the well-known rapper, of stealing the idea from a foreign short film titled “The Pavement”. The latter focused also on repeating the same murder scenario more than once in different incidents, with a narrator’s voice in the background. However, the official website of Axeer Studio states that the film was inspired by the foreign short film and the exact idea was not mimicked.