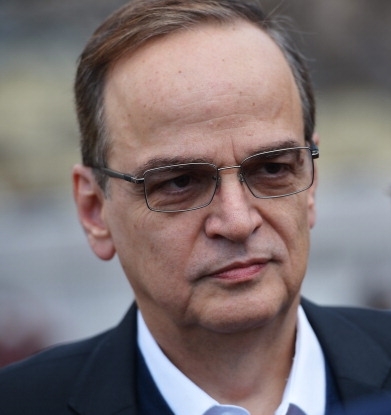 The president of the Syrian Coalition Hadi Al-Bahra said no written initiatives have been proposed by Egypt, Russia or the UN’s Syria envoy, but added they “are seeking to revive negotiations”.

Al-Bahra added that they “have pledged to support dialogue among Syrians”, according to a statement by the Syrian Coalition on Sunday. The coalition includes Syrian political opposition factions that oppose the government of Syrian President Bashar Al-Assad.

Al-Bahra is currently leading a delegation to Cairo, where he held talks with Foreign Minister Sameh Shoukry and with Arab League Secretary General Nabil El-Araby on Saturday. During the visit, discussions are ongoing on the “upcoming dialogue conferences” that are due to be held in Cairo and Moscow.

The Egyptian Foreign Ministry said in a statement that Shoukry and Al-Bahra discussed the proposal of “holding a Syrian-Syrian dialogue to be hosted in a research centre in Cairo between Syrian opposition parties to reach a unified document that reflects their vision to a political solution to Syria, prior to holding the Moscow conference”.

Moscow, meanwhile, proposed a plan to hold preliminary consultations involving various Syrian pressure groups. The Russia Foreign Ministry said these “consultations would help launch an inclusive dialogue between the Syrian government and a wide range of Syrian opposition forces, without preset conditions and based on the Geneva Communiqué of 30 June 2012”.

Shoukry heard a detailed explanation from Al-Bahra on the Syrian Coalition’s position on the suggestions to end the Syrian crisis, including the plan proposed by the UN Special Envoy for Syria Staffan de Mistura.

Al-Bahra stressed “that this [de Mistura’s] plan must be part of a comprehensive political solution to the conflict in Syria”. The UN envoy’s plan aims to freeze fighting for the sake of allowing humanitarian aid, starting in Aleppo.

During the talks with Al-Bahra, Shoukry expressed Egypt’s keenness on interacting and communicating with relevant Syrian, regional and international parties in order to reach consensus points to support a political solution. Egypt believes in that the Syria crisis cannot be solved through a military solution.

Between March 2011 and April 2014, the Syria crisis has left over 191,000 killed, according to a report carried out on behalf of the UN Human Rights Office. The conflict has also forced millions to flee their homes. The United Nations Office for Coordination of Humanitarian Affairs estimated by mid-2014, that of Syria’s 22 million citizens, 10.8 million  were affected by the fighting. These include “6.5 million internally displaced”.

According to the United Nations High Commissioner for Refugees (UNHCR), there are over 3.2 million registered Syrian refugees. These include more than 1.1 million in Turkey and Lebanon, with Egypt hosting over 137,000 registered refugees. The UNHCR believes that the number of people affected by internal conflict in Syria “is likely to increase in 2015”.

During his meetings with Shoukry and El-Araby, Al-Bahra addressed the predicament of Syrian refugees. Shoukry and El-Araby talked about the need to make serious efforts to stop the daily suffering of the Syrian people, “specifically the tough humanitarian conditions that face displaced people and refugees inside and outside Syria”, a statement by the Arab League read.

According to the Syrian Coalition, Al-Bahra and his delegation discussed the Syrian community in Egypt, noting the plight of “Europe-bound Syrian migrants”, who were either forced to remain in Egypt or return to it illegally. It also called for the “reunification of Syrian families in Egypt”.

While Syrians were initially welcomed by Egyptian authorities under former president Mohamed Morsi, they faced tougher times after his ouster. His rule was followed by a stricter and less favourable interpretation of the laws governing refugees’ entry to and residency in Egypt.

In June, international rights watchdogs Human Rights Watch and Amnesty International said in a joint statement, “Egyptian authorities have violated the rights of refugees, asylum seekers, and migrants from Syria, including both Syrian nationals and Palestinians who were living in Syria”.

The rights groups said in their joint statement that, since the introduction of the visa requirements and security clearance following Morsi’s ouster, at least 476 Syrians were denied entry to Egypt and returned to Syria.

Between August and December 2013, some 1,500 refugees from Syria were detained in Egypt, including 250 children. Most of them were detained after being caught for attempting to illegally migrate off the coast of Egypt to Europe. The joint statement described their detention as arbitrary and said “authorities coerced over 1,200 to leave Egypt, some to go to Syria under threat of indefinite detention.”

The content of a scathing Human Rights Watch report detailing the detention of the 1,500 refugees was described by the Egyptian Foreign Ministry as “wholly inaccurate”. The ministry also denied a state policy of coerced departures of refugees. Eventually, Egyptian authorities released the remaining refugees in December.