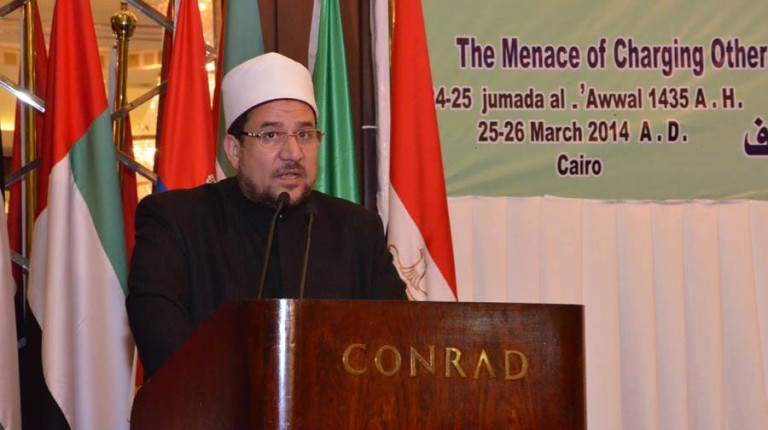 Minister of Endowments Mohamed Mokhtar Gomaa warned Monday of grave consequences if there is no “firm stand against recently released Muslim Brotherhood leaders”.

Gomaa warned in a statement posted on the ministry’s website that the Brotherhood will assign roles to different teams, one of which will “kill, destroy, vandalise, or bear arms”. He suggested that this will be done in coordination with outside groups.

He claimed that this team will “incite from Qatar, conspire from Libya, mobilise the international organisation [of the Muslim Brotherhood] in Turkey and ally with the Islamic State (formerly ISIS)”.

A spokesman for the Brotherhood could not be reached to respond to the minster’s statements.

He warned of the consequences of not taking a stand against Brotherhood leaders who were released from detention to hold press conferences and speak to the media. He said they would be “inciting either explicitly or implicitly” against the state’s security and stability.

Al-Jazeera’s Egypt affiliate, Al-Jazeera Mubasher Misr said the initiative, according to a copy it attained, suggested considering President Abdel Fattah Al-Sisi’s tenure an interim phase where the army and Brotherhood can reach understanding.

Al-Omda was cited as saying there is no stability “unless there is there is full recognition of legitimacy of the Muslim Brotherhood”.

The crackdown on the Brotherhood came after Brotherhood politician and former president Mohamed Morsi was removed from power in July 2013.

Morsi’s ouster was followed by the arrests and trials of dozens of leading Brotherhood figures, including Supreme Guide Mohamed Badie. Morsi himself was held incommunicado for months and is now facing charges in four different cases, including espionage, killing protesters, insulting the judiciary and escaping from prison.

In November, the Anti-Coup Alliance, a coalition including the Brotherhood and opposes the July power shift proposed an exit strategy to end the current crisis by calling for “deep dialogue”.