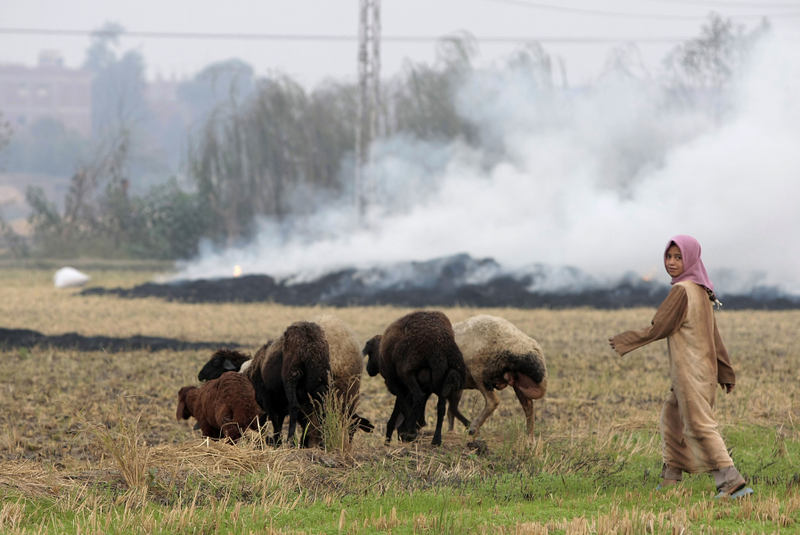 For two weeks, cars have lined up for hundreds of metres on every street that has a gas station. At first, the long hours of waiting were full of frustration and boredom. But as the petrol crisis exacerbated, lines lengthened, frustration turned to anger and the latter led to arguments, fistfights, and several deaths in Cairo and other governorates.

Egypt has long been plagued by energy shortages, from petrol and diesel to electricity, and after the January 25th  Revolution, the problem only worsened. The latest petrol crisis is unique, however, as it is the first to touch the middle and upper classes, and the resultant uproar has been enormous.

The crisis coincides with a volatile political atmosphere amid nationwide demonstrations demanding President Mohammed Morsi step down and early presidential elections be held, an atmosphere which has fueled rumours accusing the government of attempting to choke the opposition’s mobility by cutting petrol flows.

In official statements, the Minister of Petroleum, Sherif Haddara denied the accusation, attributing the crisis instead to rumours of a shortage (and fears of scarcity during the protests) which caused panicked motorists to clog stations and hoard fuel.

In his official statement, Haddara attributed the crisis to a technical malfunction in fuel storehouses in Mostorod, a city in within Greater Cairo specialised in petrol refining, which in turn led to a distribution delay. He also blamed fuel smuggling and its sale on the black market.

According to an economic report by the cabinet’s Information for Decision Support Center, subsidies for petroleum products in the 2011/2012 fiscal year represented about 72.2% of the subsidies share of the budget, or EGP 95.5bn. For the year 2012-2013 this percentage fell to 62%, or EGP 70bn, while the new budget for 2013-2014 is estimated to allocate EGP 99.6bn for these subsidies.

In a statement to the state-owned Al-Ahram on the recent petrol crisis, Rashad Abdou, the head of the Egyptian Forum for Economic and Strategic Studies, said the recurrent nature of fuel crisis is owed to “mismanagement, the lack of credentials, absence of proper planning and firm monitoring.” These elements affect transportation and distribution and allow many to abuse the consumption of petroleum products, he said.

After the revolution, consecutive governments initiated a new system to solve the fuel shortage: the smartcard system. Amid the crisis, Haddara and Prime Minister Hesham Qandil announced that this system had reached its second phase.

The smartcard system and its benefits

The smartcard system represents the Ministry of Petroleum’s latest tool to assist in the distribution of petroleum products, particularly diesel fuel and petrol.

The system, currently underway, is aimed at restructuring subsidies and is expected to save the government about EGP 36bn normally allocated for petroleum products. This money, the system’s website says, would be reallocated to other vital services such as education and health. The restructuring would also help the country meet its obligations for the International Monetary Fund’s $4.8bn loan, according to Hesham Ramez, governor of the Central Bank of Egypt.

Geared towards monitoring and controlling fuel distribution, the system would electronically record each station’s supply, prompting the ministry to take resupply actions when stocks are low. It would also establish a database of users, noting the demand on various fuel types, and identifying trends of consumption.

At the end of 2012, the former petroleum minister, Osama Kamal, announced that the smartcards would specify the amount of fuel each car would get according to its capacity. Cars would run on 5 litres a day, making up a monthly share of 150 litres, or 1,800 litres a year. For taxis, the specified amount increased to about 10,000 litres a year (more than 800 liters a month).

This announcement, however, was met with widespread public outcry that the amounts cited would be insufficient to meet everyday fuel needs.

The new smartcard system of 2013, in contrast, has cancelled any limitations on the amount of petrol or diesel provided.

The system is set to be implemented in multiple phases, the first of which aimed at connecting petrol stations and storehouses.

In a recent press conference, Qandil announced that the second phase of the fuel subsidy smartcard system would be in effect in July, with vehicles running on gasoline to follow in August.

About 18,000 cards were disseminated in the first phase and about a million registered cars running on diesel fuel would benefit from the new service, according to Qandil.

The Ministry of Petroleum has delegated the task of making the transition to the smartcard system to E-Finance, a leading company in the field of electronic payment. Through a newly launched website called Electronic System for the Distribution of Petroleum Products (www.esp.gov.eg), car and truck owners will be registering for their smartcards.

According to Qandil, users of the registration website are asked to “choose a distribution location to pick up their smartcards, which will be provided free of charge to vehicles and truck drivers.”

Smartcards will be provided through various distribution outlets, but also banks such as Agriculture Credit Bank (ACB), traffic units and post offices, along with private and governmental institutions through human resources departments.

Browsing the website that introduces the smartcard system, there is a noticeable lack of information about the different phases of the project. While Qandil announced the “second phase” of the project was underway, the website is silent on what other phases will follow.

Additionally, the goals of each phase of the project are nowhere to be found on the website. There is only a three-point section about the benefits of the smartcard in general, and how the new system will save money for the government.

Unsurprisingly, when the Daily New Egypt asked several drivers what they know about the smartcard system, most of them showed signs of confusion.

Adel, a customer lining up at the gas station, is unaware of the updates on the smartcard system. “We hear them talking about it, but so far we do not know any details,” he said. “I know there was a 5 litre limit, but I don’t know if they set a new limit.” Adel said that whatever the case, a 5 litre limit would be impossible for him, since he consumes 25 litres a day to get to Shibin Al Kawm, Menufiya for work.

Hoda, another customer, does not like the idea of a smartcard because she believes the government should not restrain people in anyway from their “right to energy.” She said the ministry should “monitor the gas stations and not the people. And if they say the smartcard won’t limit users, then what purpose will it have?”

In his recent comment on the petrol crisis, Arafat stated that implementing the smartcard system without limited share for users would not terminate smuggling; on the contrary, it would merely “open a new door for smuggling and make it official.” Arafat added it would also lead to overconsumption of fuel.

Meanwhile, despite numerous statements by the Ministry of Petroleum indicating the system’s diesel and petroleum launches in July and August, respectively, awareness of these phases appears dim, both among the public and petrol station employees themselves.

Essam, shift supervisor at one of the privately owned gas stations, said of the system: “I do not know anything about it. We as employees have not been informed about changes yet. Maybe the upper management knows, but at the station here we know nothing.”

Ahmed is the only customer at the station who knows updates about the system. “I heard them on the radio saying that the amounts of petrol you’ll have on the card will be unlimited and that’s all I care about. If it will help the ministry do its job better and it will not affect my share of petrol, then I support the system, but I did not know it is going to be implemented next month.”

For a system with such significance, there seems to be lack of awareness about the process users should follow. In addition, there is a lack of publicity about the updates of the unlimited amounts the smartcard will provide. Will the Ministry of Petroleum and other ministries involved in the new system undertake a public relations campaign for a project that is already underway? Only the upcoming months will tell.