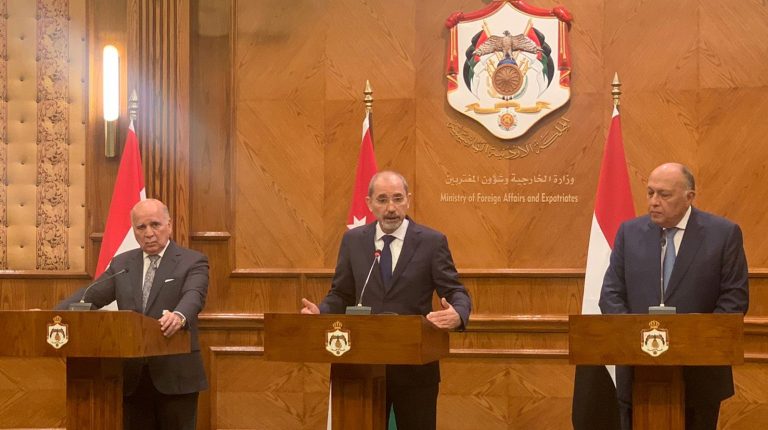 Egypt’s Minister of Foreign Affairs Sameh Shoukry stressed that the Tripartite Mechanism that brings together Egypt, Iraq, and Jordan is not intended for any kind of shortening of work, but rather to expand it and interact with other parties at the level of Arab and regional countries to ultimately benefit our citizens and achieve stability.

In a trilateral press conference on Wednesday in Amman, Jordan, with his counterparts in Jordan and Iraq, Shoukry said that the Tripartite Mechanism aims to strengthen existing ties based on the integration of the three countries, as well as enhancing economic opportunities, coordination, and the exchange of views in relation to regional issues, achieving stability, and working together to achieve the interests of those countries.

He noted that the goal was also to strengthen this relationship, explore the areas of integration that were in the interest of the three countries, and continue close coordination.

Shoukry also congratulated Iraq on the success of the political process leading to the stability, unity, and sovereignty of Iraqi territories. Moreover, he stressed that Iraq is a key component in the framework of joint Arab action and the strengthening of stability in the region.

Furthermore, the minister explained that the three countries are facing many challenges as a result of the economic pressures resulting from the geopolitical crisis, the Ukrainian crisis, and food and energy security.

He stressed that solidarity and joint action would increase the capabilities of the three countries, expressing his hope that this framework would be a model for expanding joint Arab action in general.

“We will continue in this framework because the goal of this action is nothing but to achieve our interests,” he added.

Jordanian Minister of Foreign Affairs Ayman Al-Safadi also reiterated that Egypt and Jordan stand by Iraq and support its security, stability, and sovereignty as a pillar of the region’s security and stability.

A joint statement was issued on Wednesday by the three countries that said that a meeting was held to enhance the means of cooperation and increase coordination mechanisms in the political, economic, trade, industrial, and security spheres.

The statement added that the meeting aimed to continue laying the foundations of prosperity and regional development, promote joint efforts in pursuit of strategic integration between them, and explore means of cooperation, coordination, and strategic integration within the framework of the Tripartite Mechanism.

The three sides also stressed the importance of continuous work, coordination, and consultation in their efforts to resolve regional crises, serve Arab causes and interests, and achieve security and stability in the region.

Furthermore, they agreed that the meeting would be followed by future meetings in preparation for the fourth summit that Egypt will host within the framework of the mechanism next year.

They also agreed to continue institutional communication to follow up on the implementation of the projects presented and to coordinate future steps to give them greater impetus, especially in light of the economic challenges that made systematic cooperation a more urgent necessity in the service of common interests.