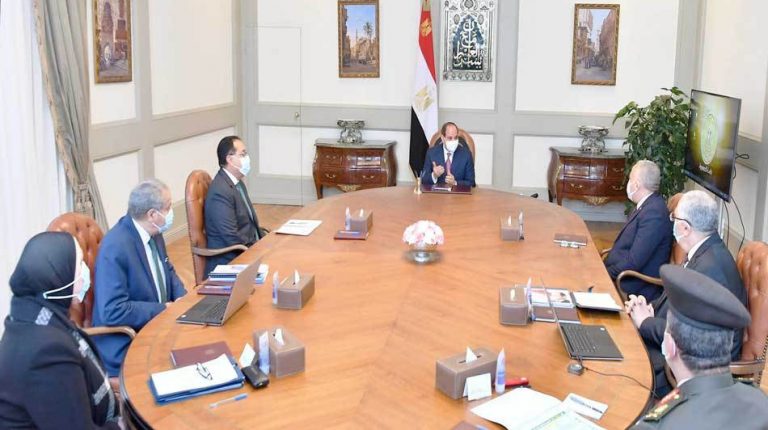 President Abdel Fattah Al-Sisi held a meeting with the Cabinet and Director General of the National Service Projects Agency of the Armed Forces Major General Walid Abul-Majd to review the implementation of a number of national projects in the food security and agriculture sector.

According to Bassam Rady, the Spokesperson of the Presidency, Al-Sisi was briefed on the executive position of the ‘Qaha and Edfina’ Food Industries Complex, which is located in Sadat city on an area of 120 acres at an investment cost of about EGP 5.5bn.

The complex will feature nine factories for various types of canned goods and food freezers.

The president directed the hastening of the schedule for the implementation of the project and to develop an integrated plan for the operation of its production lines in accordance with the latest global food processing systems, standards, and specifications to enable it to meet local and export needs.

This is to take into account the huge qualitative leap that this project will represent to complete the food industries city in Sadat city, which includes a series of food factories, including the ‘Silo Foods’ Industrial Complex.

Furthermore, the president directed the coordination of all concerned parties to expand cultivated areas in addition to promoting manufacturing and marketing to increase the added value of olive production at the local level in order to maximise the benefits Egypt has in this regard.

The ‘National Transformation Project for the Cultivation of Sugarcane with Seedlings’ was also reviewed with the aim of modernising the methods of planting sugar cane to overcome traditional agricultural problems through the rationalisation of the use of fertilisers and seeds and the easy use of modern irrigation systems to efficiently use water resources.

He also directed to facilitate mechanisation applications in agriculture to reduce production costs and reduce harvest losses in addition to increasing the quantity and quality of low productivity.

Moreover, the president instructed the provision of all the necessary requirements for the expansion of the cultivation of cane by seedlings, in particular with regard to the production of the necessary certified seeds, as well as the application of modern irrigation methods in areas planted with seedlings.

This is in parallel with the intensification of awareness-raising campaigns to inform farmers of the benefits of the application of the plant-based technique, namely increased production, quality, and cost-saving, which will have a direct impact on increasing farmers’ income and improving their standard of living.

The President was also briefed on the main aspects of the future vision for the development of the fishing sector, whether through natural fisheries or fish farming.

In this regard, he directed to provide all the necessary capabilities to strengthen the system of developing fish wealth with the aim of maximising the fish stock in Egypt.