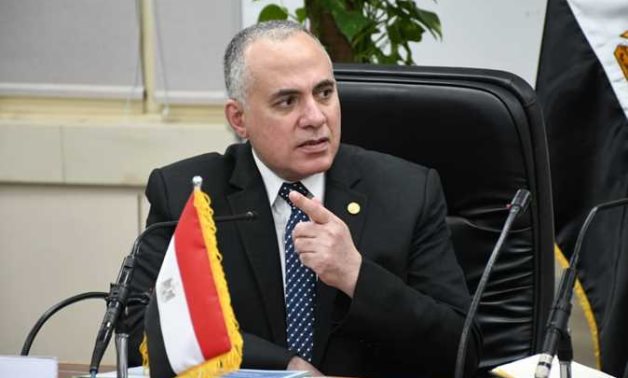 Egyptian Minister of Water Resources and Irrigation Mohamed Abdel Aty has confirmed that there are undisclosed diplomatic moves underway to settle the dispute over the Grand Ethiopian Renaissance Dam (GERD), which would only be announced when they contribute to a solution.

Al-Jazeera reporter has asked the minister about the mediation initiative announced by Algeria to resume negotiation between Ethiopia, Sudan, and Egypt over GERD.

Abdel Aty continued, “If these movements did not bring about any [positive] result, there will be no point in revealing them.”

He added that the “failure” of the second filling of GERD was due to technical problems.

In a related context, Abdel Aty said, “There is a difference between anxiety and normal concerns about the Dam file. We should be concerned about the water issue, preserve every drop of water, and manage our consumption.”

He added that Egypt and Sudan have taken the necessary measures to deal with the second filling of the Ethiopian Dam.

Abdel Aty pointed out that the cut of one billion cubic metres of Egypt’s water share affected the irrigation of 200,000 feddan, hardened lives of 200,000 families, while Ethiopia consumed unannounced quantity of water from the Nile, stressing that the agriculture land around Lake Tana was irrigated by the waters of the Nile.

He added, “They have the lion’s share, and what Egypt consumes is announced to the whole world, which is the minimum for Egyptians to live on. Moreover, Egypt reuses the water more than once.”

Abdel Aty pointed out that the state decided in 2016 to rely on desalinating seawater to secure water supply to all development projects in coastal areas.

Egypt and Sudan have been negotiating for almost a decade now with Ethiopia, to reach a legally binding and comprehensive deal on the GERD’s construction. Ethiopia started building the huge dam, which is located on the Blue Nile, in 2011.

Ethiopia’s rejection of several proposals by Egypt and Sudan on the negotiation mechanism, which includes international quartet mediation, led to the collapse of the Kinshasa talks sponsored by the African Union (AU) in April.

Egypt’s 104 million-plus population depends on the River Nile for over 95% of its fresh water.

Sudan fears that GERD will put the operation of its Roseires dam and the lives of 20 million of its citizens at “a very high risk” if an agreement regulating the operation and filling of GERD is not reached before the second filling.