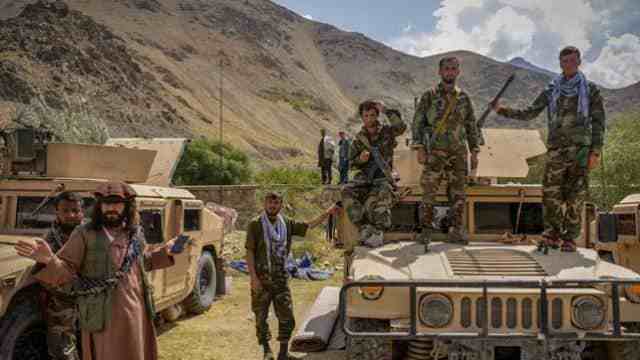 Negotiations are underway in Afghanistan on the situation in the eastern Panjshir province, the only province still out of Taliban’s control, as the Taliban said it has sent forces to the region but will try to resolve the issue peacefully.

Since the start of the US-led troops’ withdrawal from Afghanistan on May 1, the Taliban has been advancing quickly on the battlefield. During the past two weeks, the group has captured most of Afghanistan’s territory, gaining control of 33 out of the country’s 34 provinces.

A Taliban spokesman said on Monday that the group has deployed forces around Panjshir.

“Mujahedeen of the Islamic Emirate of Afghanistan have moved towards Panjshir from Badakhshan, Takhar and Baghlan provinces and stationed. Salang Highway is opened to traffic and enemy is besieged inside Panjshir,” Taliban spokesman Zabihullah Mujahid wrote on Twitter.

Mujahid said the Taliban is trying to resolve the Panjshir issue peacefully.

He said the Taliban has now cleared and taken control of Pul-e-Hisar, Deh Salah and Banu districts in northern Baghlan province bordering Panjshir.

Local media Tolo News reported on Saturday that anti-Taliban forces have seized the three districts on Friday, but the Taliban recaptured Banu on Saturday.

After the Taliban captured the capital Kabul on Aug. 15, many government security forces moved to Panjshir and formed a group called National Resistance Front of Afghanistan, according to Ali Maisam Nazary, a purported spokesman for the group.

Earlier on Monday, Nazary said the group was ready to fight and defend Panjshir but at the same time negotiate with the Taliban.

“We have always favored peace over war and we will use everything we have to establish a peaceful Afghanistan. Yet, this stance should not be considered a sign of weakness. We are prepared to respond to any aggression and defeat it, and our 40 year track record is enough proof for this,” Nazary tweeted on Monday.

“The National Resistance Front’s conditions for lasting peace in Afghanistan: decentralization of power and resources, multiculturalism, democracy, moderate Islam, and equal rights and freedom for all citizens,” he twitted.

On Saturday, Head of the High Council for the National Reconciliation Abdullah Abdullah and former President Afghan Hamid Karzai met with elders from Panjshir in Kabul to seek ways to peacefully solve the issue.

“We met with the elders, religious scholars, representatives and commanders of Panjshir Province in my residence in Kabul. We discussed the current developments in the country, and ways of supporting peace and stability,” Abdullah wrote on twitter.

On the same day, Abdullah and Karzai also met with some members of the Taliban political office who recently returned to Kabul from Doha, the capital of the Gulf state of Qatar.

In a separate development, media reports said one Afghan was killed and three others wounded on Monday as a firefight broke out between Western security forces and unidentified gunmen at Kabul airport.

Media reports quoted the German military as saying that German and US troops were involved in the gunfight that erupted at one of the gates of the airport.

The Civil Aviation Authority of Afghanistan said in a statement on Facebook later on Monday that all flights at Kabul’s airport will be suspended until further notice, urging the public not to come to the airport until flights resume.