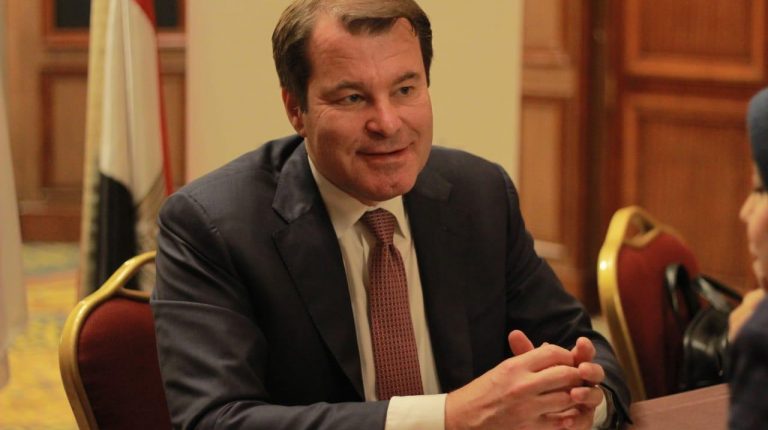 Companies owned by the Egyptian military must be allowed to sell shares on the stock exchange alongside other state companies slated for privatisation, President Abdel-Fattah Al-Sisi said on 31 October 2019.

The EBRD is well positioned to play a role in cooperating with the authorities and build on the President’s recent announcement, Rigterink said, adding, “we can help companies ready for the next step. We assess the announcement as positive.”

Daily News Egypt interviewed Rigterink last Wednesday over his recent visit to Egypt from the fourth to the sixth of November to discuss topics with the Egyptian government and the private sector community in Egypt.

After having held several official meetings over your visit, what were the main topics of these discussions?

I had productive meetings with senior government officials and business representatives. I met with Minister of Investment and International Cooperation Sahar Nasr, and Minister of Public Enterprises. Hesham Tawfik.

Over my visit, numerous signings were announced including our support to the energy efficiency of Egyptian private small and medium-sized enterprises, by providing a loan of $15m to the Arab African International Bank (AAIB), co-financed by $15m from the Agence Française de Développement (AFD), the loan will increase investment in the green economy in Egypt.

Will you announce new programmes with companies like Tanmeya in the future?

Sure, we pay great attention to micro, small, and medium enterprises (MSMEs) finance. The relatively small facility for Tanmeya in the amount of $5m loan in local currency, and supported by the European Union (EU), will increase access to finance for women led MSMEs, which remain an undeserved community in Egypt.

The loan will be indexed to Cairo Overnight Interbank Average (CONIA), the new Egyptian risk-free rate recently developed by the Egyptian Money Market Contact Group, which brings together representatives of the Central Bank of Egypt (CBE), commercial banks, and the EBRD.

The signing ceremony with Tanmeya was a bigger event since it’s not about the amount of finance we’re putting in, but about the difference TMES plans to achieve through our finance.

When we enter a relationship with a partner, we build a long-term relationship. Hopefully next year will witness more projects with TMES and maybe lead to other projects in the micro finance areas with similar institutions.

Some people associate us only with large private and public sector projects, but actually our additional strength is helping entrepreneurs to boost their businesses in the region.

EBRD is keen on implementing regional integration projects, what are some projects you are planning for the near future?

We have many projects in this sector to be implemented in the future in several sectors, particularly in the energy sector. EBRD is playing an active a role in the East Mediterranean Gas Forum with a view to provide financing and harmonise health and safety standards across the region.

We also help Egyptian companies that want to expand into other regional markets. On Tuesday, I met with companies that are looking to open shop in Tunisia.

These sorts of companies come to EBRD not only for financing, but also for smartly navigating regional markets benefitting from EBRD’s local offices in these markets and its knowledge of the local environment.

EBRD will announce several projects in its regional integration in due time.

How does the EBRD support Egypt’s infrastructure?

Developing Egypt’s infrastructure is one of the key topics discussed during our meeting with the Minister Nasr last Wednesday.

The EBRD’s work isn’t always easy since our requirements are always more strict than local ones. We’re always looking to have the private sector in the planning process.

For example, our public private partnership (PPP) cooperation for implementing the sixth of October dry port. It was very important for us to bring in the private sector in collaboration with the government.

Moreover, the EBRD is supporting the development of modern urban infrastructure in Egypt through its participation in a local currency bond issue that will free up funds for investment by a municipal authority that aims to create sustainable cities where residents can enjoy a better life.

The EBRD will invest EGP 1bn in a bond issued by the El Taamir for Securitisation Company, on behalf Egypt’s New Urban Communities Authority (NUCA). The issuance will benefit from a guarantee by the Ministry of Finance and will be listed on the Egyptian EGX.

We are delighted to participate in this landmark transaction arranged by the National Bank of Egypt and EFG Hermes. The EBRD’s participation will support the development of new urban centres, aiming to create job opportunities, a better quality of life, and economic growth in the country.

The EBRD is particularly pleased to see this transaction demonstrating the effective use of the new short and medium-term capital-market debt instrument developed by the Egyptian Financial Regulatory Authority with the support of the EBRD.

This instrument will help deepen the local capital market and attract more international players to a key market segment that has been dormant for almost 10 years.

President Al-Sisi announced recently the country’s intention to open up MOCs and SOEs. How does the EBRD assess these plans?

We noticed Egypt’s higher leadership is very supportive in opening up certain sectors including SOEs and the MOCs for the private sector.

Although I believe that it’s necessary for the state to continue playing a role in certain sectors, privatisation is necessary to attract additional Foreign Direct Investments and will also lead to improving corporate governance and accountability for companies.

Is the EBRD interested in helping Egypt implement these plans?

The EBRD is well positioned to play a role in cooperation with the authorities and build on the President’s announcement recently. We can help make companies ready for the next step. We consider the announcement a positive plan and we are ready to support the country towards achieving these plans.

It’s not the first time the President mentioned such a statement about opening up the economy. He’s mentioned other similar intentions about a year ago.

What’s the update for the Monorail project that links the New Administrative Capital with the Sixth of October city?

We are still studying this project.

Since 2019 is almost coming to an end, can you tell us more about the EBRD’s expected funds for Egypt in the full year?

We hope investments will be above €1bn again in 2019. The bank had invested $5.5bn in Egypt since the beginning of its operations in 2012, 70% of the investments are for the private sector.

EBRD is keen on investing in Egypt’s tourism sector. Can you please tell me what kind of projects the bank is currently discussing?

Tourism is a large sector in Egypt. We can contribute to the country’s hotel construction, infrastructure, and beyond. We plan for more projects in sustainable tourism in Egypt in addition to developing the skills of tourism employees in cooperation with the Ministry of Tourism and private sector foundations.

Egypt has so many beautiful places and sustainable tourism will surely benefit the economy of the country. I had a tour at the conservation center in the Grand Egyptian Museum (GEM). What Egypt is building there with the Japanese is great.

The Egyptian economy will likely grow by 5.9% in fiscal year 2019/20, compared with a previous expectation of 5.6%, driven by a further strengthening of the tourism sector and of exports, as well as large public construction projects.

Other positive factors are likely to include the re-engagement of domestic and foreign private investors following recent interest rate cuts, and the continued implementation of business environment reforms and prudent macroeconomic policies.

The main risks to the outlook consist in a “wait-and-see” approach from foreign investors, the erosion of competitiveness because of the recent appreciation of the pound and the negative outlook for the economy due to stagnation in the EU, Egypt’s main trading partner. The risks are partially mitigated by the authorities’ commitment to implementing structural reforms, according to the Regional Economic Prospects report’s updates on six November 2019.

The EBRD predicts growth in the SEMED region of 4.4% in 2019 and 4.8% in 2020, compared with 4.3% in 2018, mentioned the report, noting that the new forecasts are a downward revision of 0.2 and 0.3 percentage points, respectively, compared with previous predictions made in May.

Growth next year will be supported by the recovery of traditional drivers of growth; higher exports, the implementation of business environment reforms to attract foreign direct investment, and more political certainty – both domestic and regional. However, growth in the medium term will continue to be lower than pre-2011 levels.

AFD to provide €715.6m in funds to Egypt’s development projects

The Egyptian Museum celebrates its 117th anniversary with two exhibitions

Egypt continues to be EBRD’s success story in SEMED