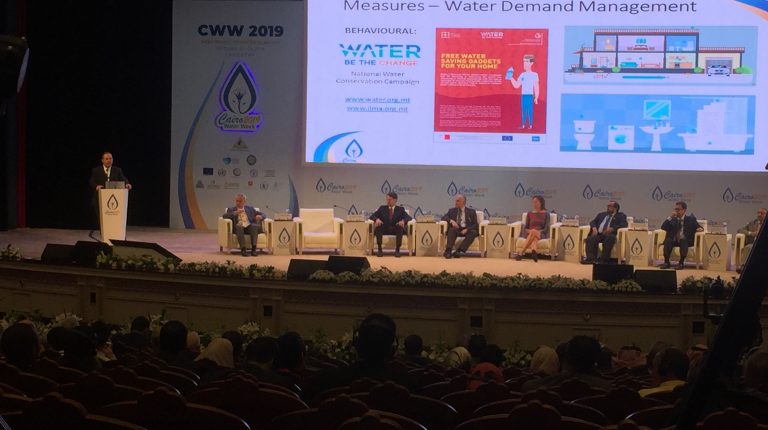 Madbouly statements came during the 2nd edition of the Cairo Water Week (CWW), which kicked off on Sunday under the theme “Responding to Water Scarcity,” under the auspices of President Abdel Fattah Al-Sisi.

Prime Minister  pointed to the recent negotiations over the Grand Ethiopian Renaissance Dam (GERD) saying that the dam’s construction is not based in real environmental studies.

“Egypt requests the participation of a fourth international party as a mediator after the Ethiopian side rejected our proposal,” he added.

Consequently, Madbouly explained that Egypt is expanding in investment in using non-traditional water sources to fill the water-needs gap. He added that Egypt’s agriculture sector will be highly affected by climate change and water scarcity.

During his speech in the opening of the conference, Minister of Water Resources and Irrigation Mohamed Abdel Aty said that Egypt understands Ethiopia’s developmental needs, yet it should respect our water security.

The minister explained that Egypt is the world’s most arid country and that it suffers from a 90% gap in water resources.

Egypt’s Ministry of Water Resources and Irrigation will organise the event in cooperation with national, regional, and international partners. More than 500 participants from different countries are expected to take part in this year’s edition of the CWW.

Abdel Aty said that climate change is one of the main challenges that water security faces, particularly due to extreme climatic events.

He pointed out that Egypt faces another serious problem which is overpopulation, with projections showing more than 130 million Egyptian citizens by 2050.

Abdel Aty stressed that Egypt as a dry country is vulnerable to the impacts of climate change including the sea level rise.

In his speech, the minister highlighted recent projects from his ministry such as constructing water harvest lakes in Sinai to capture rainfall waters, as well as establishing a massive plant for treating sewage water. A plant with a 5 m cubic metre capacity of water per day.

The event aims to promote water awareness, fostering new thinking around the most pressing water-related challenges and taking actions towards integrated water resource management and conservation.

During the five days of the conference, the attendees engaged in numerous sessions on the five sub-themes that include decreasing the impacts of climate change and the needed strategies to adapt with them.

The second aspect is achieving the sustainable development goals amid water scarcity, while the third is about using non-traditional water resources. The fourth and fifth themes are based on recent research studies and innovations that could help reduce water scarcity, and increase cooperation in issues related to water.

Five main general sessions are organised during the week, as well as more than 40 technical sessions.

Water scarcity becomes a threat to many parts of the world: Shoukry

“If there is a need for war with Egypt, we are ready to mobilise millions”: Ethiopia PM

2nd Cairo Water Week to kick off next Sunday