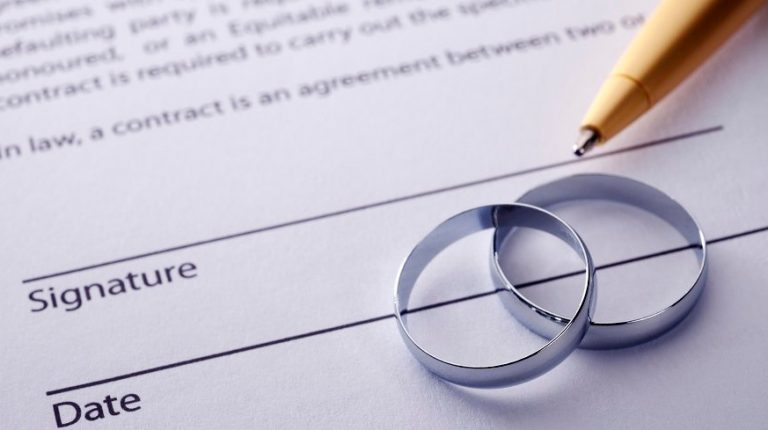 In front of the family courts across the streets of Egypt, women gather, waiting for the next hearing of their children’s alimony case, sharing their experiences with one another.

“If a divorced woman remarried, her custody will fall, but there is another alternative solution, marrying through the customary marriage,” her friend answered.

Why resort to customary marriage?

Customary marriage (urfi) is a type of marriage where people marry according to their customs, and not the country’s laws.

“Many divorced women resort to the trick of customary marriage after their divorce, because they fear dropping the custody of their children,” says Naglaa Ayad, founder of the New Beginning initiative, which aims at helping divorced women overcome society’s stereotypes against divorcees.

Another reason for using customary marriage is to keep their fathers’ pensions since most divorcees depend on it, based on the law value of the alimony, Ayad added.

She asserted that divorcees face a lot of humiliation when they are trying to get their children’s alimony, as it takes two to three years to receive it. Accordingly, most women depend on the pensions.

“Imagine if a woman does not work, how can she fulfil the financial demands of her children and her house? Meanwhile, the alimony’s value is decided by the judge according to the financial conditions of the husband,” she further explained.

This gives room for the husband to fabricate the documents that prove his financial conditions, and hence construes the judge’s decision on a fair alimony value.

In that context, another 36-year-old divorced woman who works as a teacher and prefers to remain anonymous told Daily News Egypt (DNE) that she divorced her ex-husband 10 years ago and suffered a lot to take her alimony. Responsible for a 10-year-old boy and a 12-year-old girl, she pointed out that her husband gives her only EGP 120 alimony every month, which is a very low income to support two children.

The divorced woman stressed that despite of all these economic challenges, she has never asked anyone for money and never told anyone that she is suffering.

“But now it is my right to get married, but I don`t want to loss both the custody of my children and the pension of my father that represents a great solution for the economic crisis that every divorced woman faces,” she added.

“To be honest, I am not happy with being married through customary marriage like a teenager, but the law forced us to use it so we don’t lose everything,” she said.

Both divorcees asserted that they have never imagined that they would marry through customary marriage before, but the law and their situation forced them.

With regards to the legal perspective, DNE asked Ahmed Abedein, a lawyer specialised in personal status issues about, the reasons why a judge decides to drop the mother’s custody over her children.

He stated that the mother’s custody can be dropped if she got married, died, or has a severe disease or any psychological problems.

Abedein explained that a lot of women now resort to customary marriage, through which women lose all her rights.

Agreeing with Abedein, chairperson of the marriage officials syndicate, Selim Ibrahim Montaser stated that a lot of women resort to customary marriage in order to maintain children’s custody or the pension,  which is a great mistake.

He explained that through this marriage, a woman loses her legitimate rights and does not guarantee them.

Is it religiously acceptable (halal)?

Montaser stated that from a religious point of view, the customary marriage in general is halal if it meets the required conditions of getting married in Islam which are making the marriage known to the public, having witnesses over the marriage contract, and the woman’s acceptance of the marriage.

He continued that the pension money that women receive after marriage becomes religiously inacceptable as she does not deserve it in that case.

Ayad concluded that women are oppressed in all aspects of life, especially as they alone bear the responsibility of children after divorce.

She stated that at first she is oppressed when she waits for the alimony, then with an unfair alimony, and finally through the law that prohibits her from her father’s pension if she wants to remarry.

For her part, Azza Soliman, the President of the Centre for Egyptian Women’s Legal Assistance, stated that taking custody from the mother when she remarries is a clear injustice to her.

“Women who are subjected to injustice, discrimination, and violence in the private sphere cannot participate in the public sphere effectively and freely as long as they are legally and socially punished by the assignment of rights to obtain another,” she said.

She assured that dropping custody from the mother in the event of her second marriage can have psychological and social consequences that will negatively affect the child.

Finally, Ayad and Soliman both asserted the need to reconsider the personal status law in Egypt especially in terms of the custody of children.

Meanwhile, both divorced women that were aforementioned assured that they resorted to the customary marriage as it was the only solution, demanding from the Egyptian President Abdel Fatah Al-Sisi to reconsider the personal status law, and to intervene quickly to solve this problem.

They described the child custody issues as a crisis that impacts both women and their children.

“Women are suffering at all spheres of live, we try to facilitate for them their only hope and their basic right,” one of them asserted.

EGAL decides to sell its shares in Egypt Andode

SMEs account for 61% of the total ABE loan portfolio: ElKosayer

Why is divorce the easiest choice for Egyptian couples?