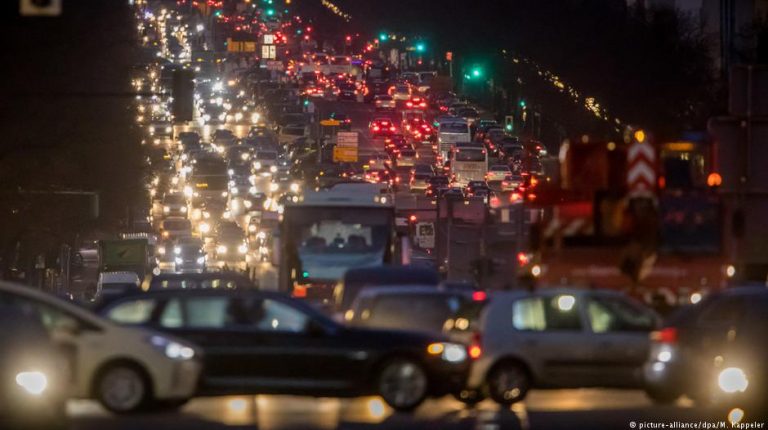 Berlin is notorious for dirty air in Germany. The local government wants to introduce speed limits on major roads to tackle the problem, while environmental groups continue to call for a diesel ban across Germany.It’s no secret that Berlin is dirty. For many, part of the city’s appeal stems from its less-than-clean trains, parks covered in cigarette butts and streets strewn with unwanted old furniture.

While that might all be part of Berlin’s “poor but sexy” charm, what’s not so charming is how dirty the air is in Germany’s capital.

It’s not the first time Berlin has had a problem with bad air. In the 1970s and 80s, the city tackled its huge smog problem through a concerted campaign to get rid of coal-burning stoves.

In the 90s and 2000s, particulate matter was the main issue, prompting the city to introduce a so-called environment zone within the city center, where only low-emission vehicles are allowed to drive.

These days, the city is fighting a different class of dangerous air pollutants — invisible and odorless: nitrogen oxides (NOx). The main problem is with nitrogen dioxide (NO2), mainly emitted by diesel-powered cars and trucks.

These pollutants are at the core of the Dieselgate scandal, which broke in September 2015 and continues to reverberate politically throughout Germany, Europe and the world. Numerous automakers, most prominently Volkswagen, were shown to have manipulated sensors to indicate fewer NOx emissions during testing than cars actually produced on the road.

A high concentration of NO2 in the air can cause respiratory and cardiovascular diseases, such as asthma and bronchitis, as confirmed by numerous public health bodies including the World Health Organization (WHO).

A new study by the German Environment Agency (UBA) supports these findings and shows that even a very low concentration of NO2 is linked to diseases such as diabetes, high blood pressure, heart failure, strokes, lung cancer, asthma, chronic bronchitis and premature birth.

“The study proves that every year, more than 800,000 people become ill [in Germany] because of NO2 emissions.”

And these illnesses even result in death. In fact, the European Environment Agency (EEA) calculated that nitrogen dioxide is responsible for more than 12,800 premature deaths in Germany every year.

That’s four times the number of fatalities from traffic accidents.

Across Europe, 75,000 people per year die prematurely due to NO2 emissions, the EEA found.

And it’s not just our health that’s endangered. Nitrogen oxides also harm animals as well as the environment by acidifying soils and bodies of water, and directly causing plants to wither and age more quickly.

That’s why the EU has long set limits on acceptable levels of of air pollutants. Coarser particulate matter (PM10), for instance, has a daily limit of 50 micrograms, which a country is only supposed to exceed 35 times per year.

“Fine particulate matter is the most harmful air pollutant in Europe, because the particles get into your lungs and they can affect your heart and cause a heart attack,” Anke Lükewille, head of the group for air pollution, transport and noise at the EEA, told DW in an interview.

“We have calculated that about 400,000 people die prematurely in Europe due to fine particulate matter every year.”

Eastern European countries still struggle with particulate matter pollution since many people use wood-burning stoves, which emit the dangerous particles into the air.

Germany is currently grappling more with nitrogen oxides. According to the EEA, 2.5 percent of Germany’s population is exposed to NO2 emissions beyond legal limits.

“It may not sound like a lot, but it is,” says Lückewille. “Germany is not doing very well when it comes to these emissions ceilings.”

The European Union has set the limit for nitrogen dioxide (NO2) at an average of 40 micrograms per cubic meter per year. But Germany continuously exceeds that limit, especially in high-traffic areas like cities. Among those German cities is Berlin.

‘I have to cough and it’s more difficult to breathe’

The Berlin Senate has set put up 16 measuring devices across the city that record the concentration of air pollutants like sulfur dioxide (SO2), nitrogen dioxide (NO2), carbon monoxide (CO), benzene, and smog (O3), as well as particulate matter (PM10) every five minutes.

One of the dirtiest districts in Berlin is up-and-coming Neukölln, where both the busy Karl-Marx-Strasse and Silbersteinstrasse are continually exceeding legal limits. So far this year, Karl-Marx-Strasse has exceeded EU limits 14 times. Last year, 22 transgressions were logged on the street.

It’s a busy street — meaning local residents have to contend not only with constant noise, but also with some of the worst air in the city.

Maher Jaroug, a student from Syria, works on this street for several hours every day handing out flyers. He says he can feel how the air along Karl-Marx-Strasse is impacting his health.

“I have allergies, and when I stand on the street for three hours, my nose blocks up and I can’t breathe very well. And I know this comes from the bad air and all the car exhaust here,” he says.

“I feel much better when the air is fresher.”

He’s not alone. “When I walk down this street, I have to cough, and it’s more difficult to breathe,” says a German woman named Daniela, who is on her way to an appointment with her daughter. She declined to provide her last name.

“In the district of Lichtenrade where I live, I don’t have these issues as much,” she adds.

Gertrud Horn has lived in this neighborhood for more than 40 years. She moved to a side street off Karl-Marx-Strasse, where there are more trees and the air is a bit better. She says she would never live on a main road like this because of the noise. But she’s come to accept the bad air.

“If you’ve lived here as long as I have, then you’ve gotten used to the bad air,” she says. “There’s not much we can do. We all have to die one day,” she says, laughing, and continues her stroll down Karl-Marx-Allee as a truck rattles on past.

“Poor people in particular are affected by the high levels of air pollutants because they are the ones living on busy roads,” explains Martin Schlegel, a traffic policy advisor with the nongovernmental group Friends of the Earth Germany (BUND).

Even though most poorer people don’t have their own car, they have to deal with the emissions from others — like people who drive SUVs from their clean suburbs into the city center, Schlegel told DW in an interview.

“That’s just not fair, and that’s why we have to take the necessary steps immediately.”

Suing for your right to clean air

So what can citizens do? They can sue their governments for their right to clean air if legal limits are exceeded.

Under the EU legal framework, this is possible for affected citizens — that is, for someone who spends the majority of his or her time in areas that are especially polluted, for instance because they live, work or study on a street with illegally high levels of air pollutants.

Often, they get help from environmental groups like Friends of the Earth Germany, which has supported lawsuits by Berliners in the past.

Environmental groups themselves are also allowed to sue for clean air in Germany. And many have been doing just that.

Environmental Action Germany is currently suing more than 28 cities across Germany over not sticking to EU regulations.

“We’ve been suing for clean air in Germany for 14 years now, and we’ve won every single case,” Resch said.

“That’s a very clear signal by the legal system that the health of the people is more important than the profit of companies.”

The European Commission has two ongoing lawsuits against the German government for continuously exceeding EU-wide limits on both particulate matter and nitrogen dioxide. Germany could face high fines if it doesn’t reduce its air pollution soon.

‘You have to ban dirty diesel’

So how can Germany get a handle on its air pollution problem? According to some environmental groups, the primary solution would be to ban the biggest NO2 culprit: diesel cars.

One in three vehicles on German roads run on diesel fuel. The EU framework began favoring diesel vehicles in the 1990s, as they were marketed by carmakers as the more environmentally friendly choice since they burn less fuel per mile and therefore emit less carbon dioxide, a greenhouse gas that causes global warming.

But especially in light of the Dieselgate scandal, diesel cars have come under scrutiny in Germany, since NO2 can be primarily traced back to diesel fuel combustion.

“More than 80 percent of NO2 emissions in Berlin come from diesel cars,” Resch points out.

After a recent court ruling by Germany’s top administrative court, German cities will be allowed to ban the driving of diesel cars to improve air quality.

Despite protests from the automotive industry and consumers concerned about being able to use their cars, groups like Friends of the Earth Germany and Environmental Action Germany are calling on cities to do just that.

“If you want to fulfill legal requirements and protect the health of the people, you have to ban the dirty diesels,” Resch says.

Beyond that, he believes that authorities should force car manufacturers to fix their broken emission control system.

“The car industry is controlling politics in Germany,” Resch says. “In the past 15 years, this influence has even gotten stronger — to the point where the government isn’t enforcing regulations the way it should.”

There are more measures cities can take if a diesel ban can’t get pushed through.

Similar to the environment zone, cities could introduce what’s being termed a “blue badge” admitting only cars that meet national emissions standards. Berlin and some other cities have already implemented something similar for particulate matter, which has improved air quality.

Since driving slower translates into more efficient use of fuel, cities can also introduce a speed limit on heavily trafficked streets. Berlin plans to implement a 30 kilometer-per-hour limit on five major roads later this month. If successful, more streets will follow, according to the Berlin Senate.

On one such street in Berlin where the speed limit has already been introduced, air quality has improved while noise pollution has gone down. Friends of the Earth Germany says particulate pollution decreased 30 percent while nitric oxides went down 18 percent.

“You can already tell that the new Berlin Senate is investing more in public transport, electric buses and bike lanes — and that makes me optimistic,” Schlegel said.

One particularly “green” solution is to plant more trees. Mexico City — which has struggled with its own air pollution problems — recently converted the pillars of the raised highway on its busiest artery into more than 600,000 square feet of vertical gardens to improve air quality.

But in the end, environmental activists believe a diesel ban is still the option that will make the most difference.

‘Blue Carbon’ could help save our planet from harmful emissions

Young adults with type 1 diabetes could have muscle complications