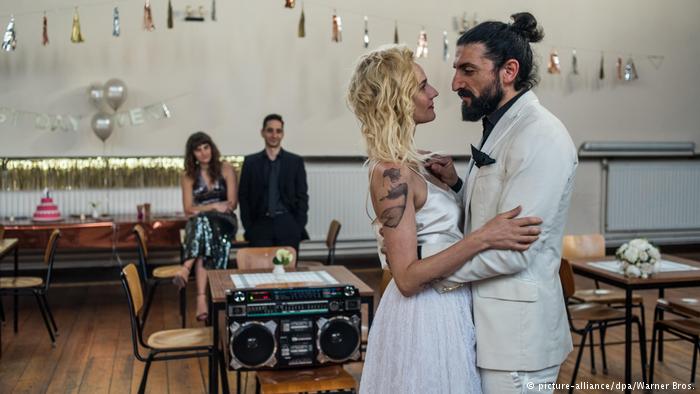 His film “In the Fade,” which confronts the horror of far-right extremist attacks in the mid-2000s, has won a Golden Globe and is nominated for an Oscar. Here’s a look at German director Fatih Akin’s work.Fatih Akin’s latest oeuvre, “In the Fade,” is an emotional thriller that underlines his signature style: it is a fast-paced movie, which — like many of Akin’s previous works — was produced within a short amount of time.

For Akin, directing the movie was an act of liberation — both personally and professionally. Akin hit a career low in 2014 when his previous film “The Cut” flopped with critics, film festivals and moviegoers alike.

Seeking an outlet to redeem himself, he may just have succeeded at that with Hollywood’s top awards now celebrating the German director. “In The Fade” scooped the Golden Globe for best foreign language film and is nominated in the same category for the upcoming Oscars.

Reflecting the director’s interest in social issues, “The Cut” dealt with the Armenian genocide — a subject that has repeatedly led to major diplomatic rifts between Germany and Turkey. Set at the time of the massacre, it was intended to be a grand epos with attention to detail and a strong political message.

But it simply wasn’t Akin, who is known for tackling contemporary issues using equal amounts of humor and tragedy in his films. Attempting to direct a historical drama was perhaps a little out of his league.

He told the German daily newspaper Süddeutsche Zeitung that when he finished writing the script for “In the Fade,” he was coming out of a “rather fatalistic phase” after having spent nearly five years working on “The Cut.”

“I took too much time with the script and the production, during the shoots and working out all the details for the period costumes. When you spend too much energy on such details, you tend to forget the actual drama you’re trying to convey, and fall short in fully exposing the inner life of the main character.”

“‘In the Fade’ was the fastest production I’ve ever filmed,” said Akin. “This is something I learned while working on a prior project, ‘Goodbye Berlin.'”

Released in 2016, the youth drama is based on a bestselling book, which Akin was asked to direct at the last moment after the intended director of the film quit the project. Throughout the production, he had to remain quick to respond to changes — a welcome change in pace after the frustrating creation of “The Cut.”

Akin says that his experiences in both “The Cut” and “Goodbye Berlin” played a major role for his work in “In the Fade.” The contrast between the productions reminded him that his specialty is telling stories of simple people, exposing their emotional baggage and infusing their narratives with drama.

“In the Fade” is another example of Akin’s storytelling genius, bursting with emotion and impacting audiences in the same way that “Against the Wall,” his initial success, did back in 2004.

The new film doesn’t only bring Akin back full circle in terms of cinematic success. The German director with Turkish roots also gets to address his feelings, inner anger and pent-up frustration at the heinous murders committed by the NSU movement — and particularly at the way the police and investigators ignored the severity of the attacks at first, failing to link them together while focusing their investigations on the family members of the victims, turning them into suspects.

Fatih Akin: ‘This could have happened to me’

It was a scandal that “investigators assumed that the victims and their families had skeletons in their closets simply because of where they came from,” Akin told the German news agency dpa. “Having a Turkish, foreign background myself, I felt that this was a personal issue. This could have happened to me.”

“In the Fade” was initially planned as a courtroom drama, but his co-writer Hark Bohm demanded major changes to it. So Akin rewrote the script and directed a movie in three parts.

In the first part of the film, audiences witness an attack carried out on the husband of the main character, played by Diane Kruger. Their son also dies in the attack. In the second part, “In the Fade” deals with the courtroom drama aspect of the crime, and the third part becomes a revenge thriller.

For her performance, Diane Kruger received the award for Best Actress at the Cannes Film Festival. Portraying the complete stages of grief, she gradually evolves from an anguished woman who lost her husband and child in a cowardly attack into a revenge-seeker.

As liberating as “In the Fade” was for director Fatih Akin, it also had a redeeming effect on Kruger. Born in Germany but never part of a German production, the actress had been pigeonholed as a star of light entertainment. Her performance in Akin’s new film seems to have convinced her critics of the opposite — much to the delight of her director.