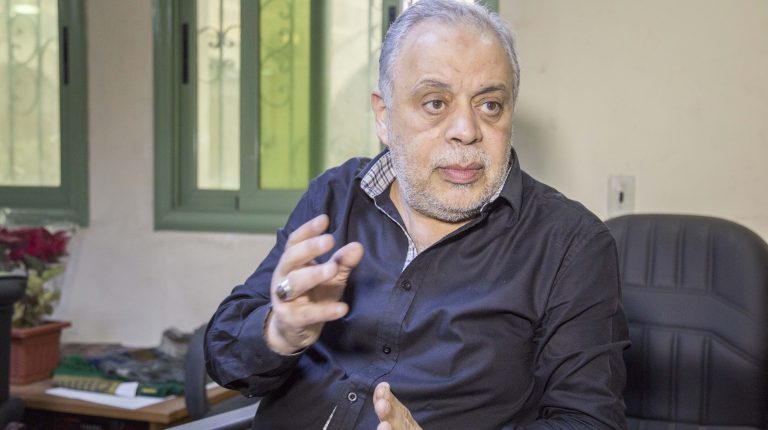 Ashraf Zaki, head of the Egyptian Actors Syndicate and dean of the Higher Institute of Dramatic Arts, has been a director for over 30 years. His name has been circulating for many years in politics, although he has not directly work in it.

He reached the position of heading the syndicate twice, the first during the end of the Mubarak era, when he stepped down voluntarily after attacks against a number of fellow artists after the 25 January revolution, and returned to office again through elections in 2015.

Ashraf Hassan Zaki is brother to actress Magda Zaki, married to actress Rogina, and is a father to two daughters, Maya and Mariam.

1. In the beginning, how can Ashraf Zaki balance the administrative work of the syndicate with academic teaching duties alongside acting?

It is not a matter of course because the three tasks are closely linked to each other. I am here to teach acting and directing and in the syndicate I deal with actors and dramatists. In my work, I also practice acting and directing. There are examples among our great professors such as Saad Ardash, Galal Al-Sharqawi, and Ahmed Abdel Halim who were leaders in the same fields in parallel.

2. Did academic and syndicate work affect the number and quality of the works that you could have provided?

I cannot say this. I am satisfied with my destiny, and God always helps me for the best, I am in great grace and can perform well in the fields I work in.

3 – What is the difference between heading the Syndicate now and the period before 2011?

There are many differences and many people changed. The conditions and the circumstances changed, the Egyptian people themselves changed a lot, and I enjoy serving my colleagues even those who did not elect me, or were against me because I believe that I am only a tool in the hands of God to fulfil the needs of the people. There is a great status for those who serve others which I wish to achieve. But now, there are no words of thanks or appreciation, and with the spread of social media, tarnishing people’s reputation became widespread, and this makes me very sad because of the absence of the strong Egyptian values.

4 – Do you think the people’s love to old-time artists is used to defame the syndicate and distort your image such as in the story of artist Amal Farid?

Indeed, Amal Farid is well-off, and I am not responsible for a superficial person, who saw her in a cafe showing the natural signs of the passage of time and depicted the lady as having a difficult life. While all there is to it are the time and changes in people’s shapes that affects us all.

5 – There is a question among a large number of simple citizens who are surprised  that some artists and actors need financial help in light of what they hear about actors’ high wages, how do you comment on that?

This is a very respectable question. The syndicate includes thousands of people who are not paid high wages, except for a number not exceeding 10 names.

In addition to this, the syndicate includes, for example, people who work in the folk arts field, and those have very low wages, their work is cumbersome, and is limited to a specific age range such as a puppeteer or a circus performer. How do they live after reaching the age of 50?  For this reason, we have to honour and help them.

6 – Is honouring artists in various fields the task of the Syndicate only?

Of course not, this is the duty of the state as well, and there are parties involved in honouring these people only for fame.

There are two ways of honouring artists. First, the recognition of established professional institutions. This is what is required, similar to what was done with Madiha Yusri and Nadia Lutfi, which is a respectable thing. There are other kinds of honouring anyone for the sake of show and fame only.

7. As for works of art, the debates that is going about them and their relevance to Egyptian society, who is responsible for selecting these works?

Unfortunately, no one is. Back in the days, the Ministry of Information was involved in the production sector and in the Egyptian Media Production City (EMPC), but now anyone can display anything on the screen, and things are left to the agreement between the producer and the owner of the channel, which is also not fixed. Every few months, channels are sold and the ownership changes. We never know who sold and who bought, the work is aired without even knowing the content.

I am now addressing Makram Mohamed Ahmed, chairperson of the National Media Authority to find solutions to that problem.

8. Does the syndicate work according to a professional code of conduct?

Although we have a code of conduct, we cannot be sure that people are not seriously adhering to it. Our basic problem, as we learned at the Institute of Dramatic Arts, is that the only rule in art is that it has no rule. It has no specific and disciplined mechanisms. For example, sometimes an artist succeeds and becomes popular and his wage is doubled, and in another cases, we find the same artist unwanted. There are no specific measures that can be used to judge and work through.

The conflict was due to a film titled “Thanya Wahda” (One Second) by Al-Sobki and Haifa starring, and after filming two days before last Ramadan, and because of her preoccupation with her series “Al-Herbaya”, she decided not to complete it, which drove Al-Sobki to file a complaint to the syndicate.

We formed a committee, composed of the head of the syndicates, Director Omar Abdel Aziz, president of the Chamber of Cinema Industry, and head of the Cinematographers Syndicate.  They decided that Haifa should incur the cost of two days of filming and return the down payment, and that the project would stop. This committee continues to look into similar problems, and God willing the crisis is on its way to being resolved soon.

10. Do these conflicts affect your work in the syndicate?

This is one of the syndicate’s roles in accordance with the law. We resolve disputes that arise between art makers and members of the syndicate, and we will keep doing so forever. Therefore, that does not stop me at all from the practicing my duties, because there are specialised committees including legal advisers for consideration and determination in such problems.

11. How do you assess the great spread of foreign drama in Egypt, such as Turkish and Indian series?

We are coming in strongly. We have great artists and great directors. We are heading for the best. We have a special place in the market. Egypt is still the Hollywood of the East, and we are number one in the Arab world.

It is expected that the Egyptian drama will impose itself on the western screens, but we have passed through a difficult stage, we will pass it soon.

12 –You have a vision for the youth and you always send them messages, why?

Because young people are everything in this country, and I always advise them to take things slowly. Things have to be planned patiently. I kept working hard for 30 years to reach where I am now.

Even a model such as Mohammed Ramadan did not arrive quickly. He has works with us since 2005 and over the years he worked hard until the opportunity came to him.

13 – How do you respond to the accusations to the art’s sector of depending on connections?

I will not deny the importance of connections in art as the phenomenon is present in other sectors of society as well. However, in art, it gives you the opportunity only but cannot guarantee you success.

14- Why did your decision to restrict the work of foreign actors in Egyptian drama fail?

Because the attack on me was great, and now all the disadvantages that I expected are happening, and the producers are the ones who made the decision fail.

15. With regard to terrorism, do you think that artists contribute adequately to the war against terrorism?

Unfortunately, the role of the artists was greater in the era of Mubarak, because the media was a state media, producing what corresponds to its priorities.

Now, the private sector is targeting other things, the most important of which is profit. Despite its advantages, it sometimes harms national security, so I still demand that the content be passed by a responsible party.

There are works that stopped but after they have been presented with large parts and this is a later intervention, but there must be a primary intervention, and I see the content at the same time as any citizen.

16. What did you notice when you visited “Beer El Abd” area after the recent terrorist incident?

I noticed that these citizens are not on the cultural or artistic agenda which leaves them feeling wounded, and they sent me personal messages that they wanted art and culture.

17. Who is responsible for this role and why do not you start acting upon it?

I do not know what they will do. For my part, I will work on a number of documentaries to commemorate the martyrs of terrorism and will soon be released.

18. Have the Brotherhood artists been dismissed from the syndicate because of their affiliation?

Of course not. They were dismissed because they did not pay the fees, we do not question people over their political affiliations.

Egypt’s last puppeteer dies at the age of 80