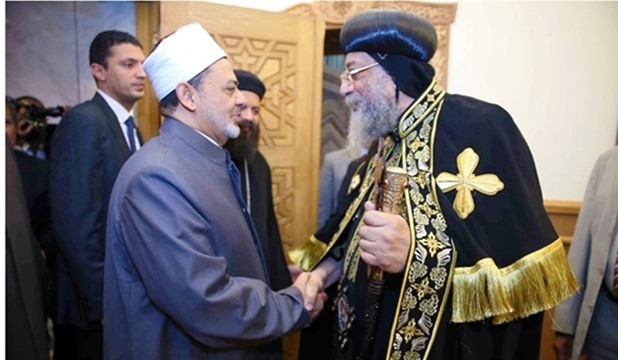 After two days of clashes in Atfeeh village in Giza, which took place after a mob attacked a Coptic association that allegedly held Christian prayers, Atfeeh Prosecution ordered the detention of 17 defendants. 13 of the defendants are Muslims accused of illegal gathering and thuggery, while four others, all Christians, are accused of using a residential building as a place of worship, including the house’s owner.

According to a journalist who resides in Atfeeh, who spoke on condition of anonymity, dozens of Muslims gathered last Friday, after weekly prayers, to denounce installing a bell in the building, hence publicly turning it into a Church.

Atfeeh’s archbishop Atfeeh said that dozens of Muslims attacked the building where prayers were reportedly held.

The church, yet to be sanctioned by the state and thereby gain full legal recognition, has been observing prayers for 15 years. Despite the recent easing of laws, local authorities continue to refuse to give building permits for new churches, fearing protests by Muslim conservatives.

Egypt’s Coptic Christian minority comprises about 10% of the country’s population of 93 million people, and is the largest religious minority in the Middle East, according to Deutsche Welle. They have been targeted by militants in a series of attacks since December 2016 leaving more than 100 dead and scores wounded. The Islamic State militant group has vowed to keep making Coptic Christians a main target of their attacks.

After the Friday incident, the discourse of reconciliation has been rising to the surface as a possible way to solve the incident, something that has been repeatedly brought up by members of parliament and security officials.
Meanwhile, Muslim religious officials have been mobilising to solve the conflict in what is known as extra-judicial community justice meetings, which usually include key figures from different sects, whereby a truce or peace is reached. The act is usually attended by governmental authorities and security personnel.

Egyptian Family House, an unofficial religious body, and a delegation from Al-Azhar is expected to visit the village to meet with their Coptic clerics and families there.

In May of last year in Minya, an elderly woman named Soaad Thabet, 70, was forced out of her home by an angry mob, dragged in the street, beaten, and her clothes ripped off. The incident began when a rumour about an alleged affair between Thabet’s son, Ashraf, and a Muslim woman sparked tensions in Al-Karam village in Minya, leading to threats against Ashraf who subsequently left the village. One day later, a group of an estimated more than 200 people looted and torched at least seven homes belonging to Coptic families.

Early December media reports claimed that the conflicting sides have reached a reconciliation and the prosecution dropped the case.

A June 2015 report by the Egyptian Initiative for Personal Rights (EIPR), regarding local community response to sectarian tensions, claims that such informal sessions to address community problems have a negative effect.

Unverified, quickly spread rumours are often enough to spark sectarian violence, such as a rumour that a church is set to be constructed. In Alexandria, such a rumour was enough to lead to an attack on Copts in a village, similar to the recent Minya attack.

The absence of more rigorous measures against the perpetrators of such acts by authorities reinforces misconceptions already shared by a sector of Egyptian society: that Christians do not have the right to decide on the place where they practice their religious rituals, according to EIPR.

The report documented the use of “customary reconciliation sessions” in which figures of a local community gather to resolve disputes, typically between Christian and Muslim families.

The use of these sessions, though long established, escalated after the ouster of Morsi and his Muslim Brotherhood regime in July 2013, with over a third of Egyptian governorates documented as resorting to them, especially in Minya.

When incidents such as the above occur, one of the main reasons that local communities turn to customary reconciliation sessions are that they are a quicker and cheaper method than going through the official legal system, which can take years to resolve disputes.

While the majority of customary reconciliation sessions occur in the countryside and away from the seat of government in Cairo, some have also taken place in the capital.

Atfeeh, however, is not new to such incidents. In March 2011, a crowd assaulted and torched the Church of the Two Martyrs in the village. Several were arrested, but were not sentenced. Two days later, Field Marshall Mohammed Hussein Tantawi, at the time head of the then-ruling Supreme Council of Armed Forces, had the church rebuilt at the government’s expense.

In March 2017, Prime Minister Sherif Ismail formed a committee assigned to review the status of Egyptian churches and their affiliated buildings in accordance with the recently passed Church Construction Law. The committee included the ministers of defence, housing, local development, justice, legal and parliamentary affairs, and antiquities.

Ever since, the committee has been in charge of receiving requests from representatives of Christian communities wishing to establish new places of worship, similar to the process of obtaining licences for existing churches in the country, as well as any affiliated buildings such as services buildings or other places of worship.

A new law organising the construction of churches in Egypt was passed in August 2016, shortly after being drafted by the government and the head of the Coptic church.

Egyptian, Russian ministers of defence, foreign affairs to meet on 14 May

Sherif Ismail returns to work after 2 months of absence

Op-ed review: Messages of unity between Muslims and Christians and praise of the regime

Claims of violations against Copts in Egypt are lies: Parliament’s Foreign Affairs Committee

Feast of Assumption of Mary celebrated in Egypt