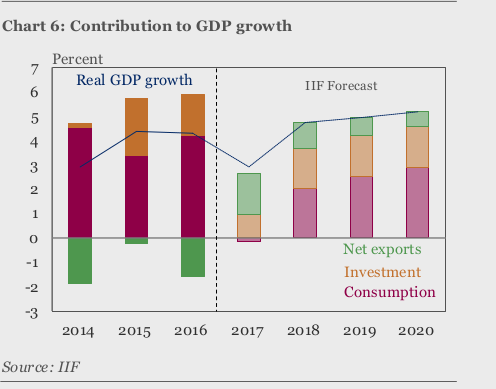 The Central Bank of Egypt (CBE) is expected to maintain its current tight monetary policy as it tries to reduce the inflationary pressures that hit the biggest economy in North Africa, the Institute of International Finance (IIF) said in a recent report.

“The monetary policy will need to remain tight to anchor inflation expectations at a lower level. The CBE raised its policy rates by a total of 500 basis points since November 2016 to curb inflationary pressures. The ingrained nature of inflation and its expectation means that reducing inflation will require keeping the current policy rates (overnight deposit and overnight lending rates at 16.75% and 17.75%, respectively) the same through end-2017,” the report noted.

The CBE raised interest rates by 2% in May to tame a rising inflation that stood at 30% in May.

“High and persistent inflation has presented a serious macro-economic challenge in Egypt in recent years, increasing the country’s domestic and external vulnerabilities. Several factors underpin Egypt’s high rate of inflation: (i) entrenched inflation expectation; (ii) cost-push shocks from binding sector-specific supply constraints (particularly in agriculture, energy, and transportation); (iii) VAT introduction last September at 13% and the increase in fuel prices and electricity tariffs; and (iv) pass-through from the sharp depreciation of the Egyptian pound since November 2016 following the move to a flexible exchange rate regime,” the report noted.

The IIF expects that inflation rates will decline gradually to about 18% by the end of 2017.

“We expect the annual headline inflation to continue to decline to about 18% by the end of 2017 and 12% by June 2018. But in the absence of a strong food supply growth, it would be difficult to bring headline inflation to below 10% in the next few years. The CBE’s communication regarding prospects for meeting the inflation target of 13% (+/-3%) by the end of fiscal year 2017/18 is feasible. However, the CBE needs to shift to a longer horizon by elaborating a medium-term inflation targeting framework,” the IIF added.

According to the report, the sustainability of a medium-term inflation target of significantly less than 10% at this stage will depend on enhancing the food supply and agricultural market-based pricing, as well as reducing price distortions.

Egypt’s year-on-year headline inflation declined to 29.7% in May from its peak of 31.5% in April.

“Overall growth in the past few years was driven largely by private and public consumption, which grew by an average of 4.5% in 2011-16, compared to an overall real GDP growth of 3.1%. On the production side, most of the growth was driven by services, while activity in agriculture remained weak. These resulted in excess demand for food, giving rise to relative food price inflation,” the report noted.

“Our estimates show that about 60% of the increase in the CPI over the past five months were due to the sharp depreciation of the Egyptian pound. Over time the effect of exchange rate will dissipate as most of the change in the exchange rate in Egypt passes to inflation in the first nine months. In this regard, the month-to-month increase in headline,” the report added.

It attributed growth deceleration to tight monetary and fiscal policies combined with the sharp depreciation of the pound that will reduce demand, particularly consumption.