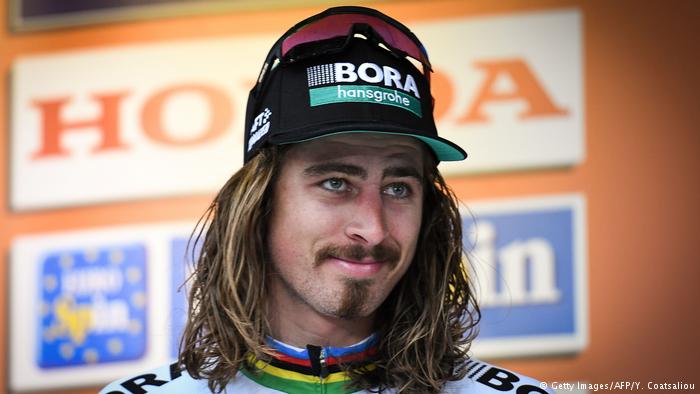 He is the probably the world’s best cyclist: Peter Sagan impresses with his versatility and star qualities. Speaking to DW, he discusses pressure, the spring classics and why doping is nearly impossible today.DW: Peter Sagan, we’ve seen you winning in Classics, in sprints and even achieving podiums in mountain stages – is there anything on a bike that you cannot do?

Peter Sagan: I think there are a lot of things I cannot do. There are a lot of different disciplines in cycling that are really hard. All humans are able to walk and run, but nobody is able to run like Usain Bolt. And that is also the case for me. I can ride on a BMX-bike or a track-bike but it would be very hard to win anything on it. So, that is the difference.

You’ve started very well in the classics early this season. What are you expecting for the upcoming big races, the Tour of Flanders and Paris-Roubaix?

Well, I do not know. I am going to do a lot of races such as these two races. I will try to do my best. Yes, these races are famous and they are different to the other races. But they are just races.

Do these races suit you more than others, because they are really tough and demand good handling skills?

You cannot say that I have got handling skills or good skills on the bike and that is the reason why nothing happened to me. These races are different. It depends also on the conditions and luck during the race. You need a lucky day.

‘It is always risky’

You started your career by racing for an Italian team, then a Russian team and now a German one. What is the difference with Bora-Hansgrohe?

We have a kitchen truck (smiles). The whole kitchen is made by Bora, this is nice. What else is different? We are still racing on bicycles. It is another brand, a new group, also the staff and the whole surroundings. For sure, the mentality is different. But we are still in cycling.

Sometimes you have shocked the world with your daring downhill antics. Was your wife ever a little bit scared about you?

You’d have to ask her, I do not know.

You do not seem to be scared at all?

Depends. If I have to ride a descent and take a risk, without any reason, I will not take the risk. But even if I have to push on a descent with reason I will also be careful. In cycling you never know. Maybe there is something on the ground, like oil or gravel. It is always risky.

There are some critics in the media. They are saying that you are a sort of a clown on the bike. Is the world of cycling just a bit too serious?

It is part of the business to be as you are?

If it is not you have to go to Hollywood.

‘If somebody wants to dope, he is just stupid’

As a two-time World Champion people are expecting you have to take responsibility for the whole sport and to be the speaker of a young and clean generation of cyclists. What do you think about this point?

I do not think that this is my job! Who is telling me that I have to take responsibility for the sport? Nobody!

A big part of the public, particularly in Germany, is still in doubt about cycling. Is pro cycling credible today?

Well, I am talking a lot about these things, others like Bradley Wiggins or Christopher Froome are attacked by these things, I am attacked by these things. If you want to hear my opinion: If somebody wants to dope it is impossible in this time. We have got the anti-doping-system ADAMS. There, we have to write where we are sleeping, where we go, every day. We have to plan our life – where we will be in one month’s time. So the anti-doping control is able to find us at nearly any given second. They can come twice a day. What more should I say about it? If somebody wants to dope, he is just stupid.

In recent years there was substantial progress in cycling, with new sponsors and new races. What do you think about the actual state of cycling?

It is nice and it is growing up again. I am happy about that. My team Bora-Hansgrohe is a good example, it is growing. It is not like a state-owned enterprise, it is a private business sponsor and this is nice. It is important that different companies are investing in cycling so it is growing up again and there will be more opportunity for us in the future.

During press conferences and media events sometimes you seem to be a little bit bored. Is that all too much, is it sometime hard to be a superstar, to be Peter Sagan?

No it is not hard. But the problem is, that all the questions I was asked by others were asked many times before. So it is not something new. If they are new it is interesting and not boring. But about a hundred journalists are asking the same questions.

‘Winning the Tour is not impossible, but it has to be my decision’

What does it mean for you and your German team that the Tour de France will kick off in Germany this year?

It is really nice. Nicer for the team than for me. I cannot expect more than they will be happy and there will be a lot of people cheering for us.

If you win the Green Jersey in the Tour de France you would equal the record set by Erik Zabel. Is this an additional motivation for you?

First of all I wanted to finish the Tour de France. It is possible to win another Green Jersey but we will see.

Some people say if you adapt your body you can win the Tour de France. What do you think about that?

The people who say that can climb on the bike and can try to become a professional cyclist. After that they can live their dream, but this is not mine. It is not impossible to win the Tour. But it has to be my decision, not one of the other guys. My approach to goals is a different one: I was always thinking about winning the world championships. The way to it was not easy for me. The first time I did not finish, the second time I felt sick, another time I crashed, and so on. And then I tried not to think about the world championships and I won this race twice. The key is not to think about it.

Peter Sagan is one of the best cyclists of the world. He rides for the German Team Bora-Hansgrohe and is the defending world champion. Sagan was born in 1990 in Slovakia and he began riding bikes at the age of nine. He won a race as a junior cyclist on a supermarket bike he borrowed from his sister Daniela and kicked off his career with victory at the mountain bike junior world championships. In the meantime, he has won more than 90 pro races.

The interview was conducted by Joscha Weber.

Tour de France: Who will go the distance?