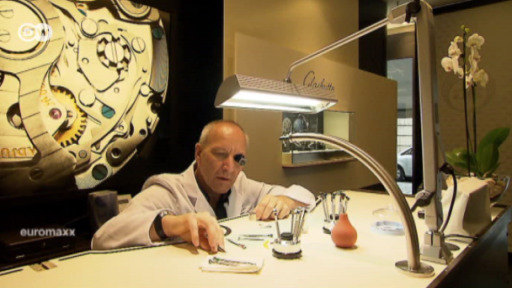 Global exports of Swiss watches have shrunk in recent years. But exhibitors and traders at the world’s largest fair of the watch-making industry, the Baselworld, are confident the hard times will be over soon.The world’s biggest watch and jewelry trade fair opened its doors to the media Wednesday, with the public invited as of Thursday to catch a glimpse of what’s new in the industry.

The giant gathering in the northern Swiss city of Basel is the highlight of the year for watch and jewelry makers, with hoards of retailers looking to fill their showcases with pricey bling.

But the hosts, Swiss watchmakers, have had to grapple with decreasing sales for a couple of years. The latest figures are not encouraging either.

Global exports of Swiss watches slid by 10 percent in February year on year to $1.5 billion (1.4 billion euros). Shipments to Hong Kong, the biggest market for Swiss watches, slumped by 12.1 percent last month, and exports to the US as the second-biggest market even plunged by 26.2 percent.

No rapid improvement in sight

Most European markets also fell. Only shipments to China rose by 6.7 percent in February on the year as Chinese consumers’ thirst for luxury goods appeared strong despite the market suffering a severe hit when Beijing started cracking down on corruption by banning extravagant gifts like expensive watches to public officials.

For the whole of 2016, Swiss watch exports shrank by 9.9 percent after contracting 3.3 percent a year earlier.

Some market observers have said they’ve seen some indications of market stabilization of late, but Citigroup analyst Thomas Chauvet is not convinced.

He said the most recent figures showed there was “no underlying improvement in the industry” despite a more upbeat mood from senior executives and a more optimistic tone from the Federation of the Swiss Watch Industry.

The trade fair in Basel focusing on watches and jewelry is being held for the 100th time this year. The first such fair there back in 1917 was still part of a wider trade show called “Basler Mustermesse.”

ILO to Qatar: Put your money where your mouth is or else