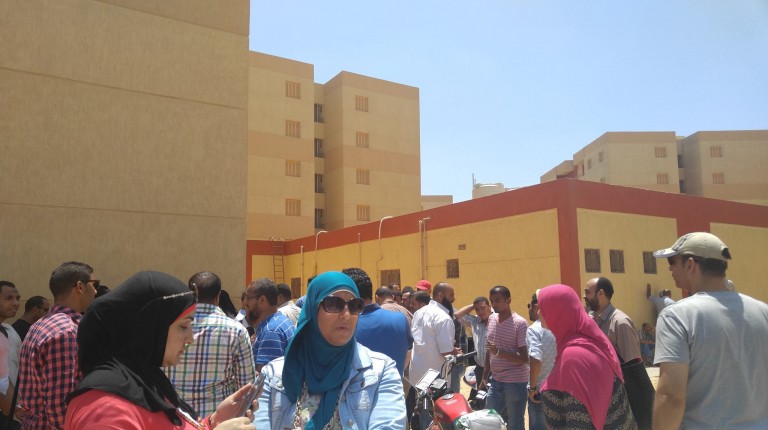 The state has been dealing with a huge challenge, namely the housing crisis in Egypt, by providing housing for low-income people and the construction of nearly 500,000 housing units in less than two years. Some of the owners of such properties, however, have taken to selling or renting their properties through subcontractors.

There are several social media pages, on Facebook in particular, where such housing units are put up for sale or rent. One Facebook page with a focus on property in Dahshour in 6th of October City, owners are offering up their properties to workers and families at prices ranging from EGP 500-700 a month.

This issue has left social housing owners split into two camps. The first group wanting to rent or sell their units, while the other calling on the state to prevent the city from becoming an informal housing area.

Those that want to rent their homes aim to raise the monthly rent price from EGP 500 to EGP 700, adding that once the city is fully integrated within the region that they wish to raise prices to between EGP 900-1000.

Saif Yasser a unit owner in Dahshour said many owners cannot afford the instalments owed on the unit. He does not mind hiring out his house to other families, but would not hire it out to labourers.

Ehab Mohamed, another owner, said many labourers have taken residence in these units, making a lot of noise and dirtying the inside of the building.

While some home owners such as Yasser may refuse to rent their homes to labourers, others have found that doing so creates conflict within the building. Tarek Sanad, a home owner, said that the building’s security guard had asked him to rent his apartment to labourers but he had refused. Afterwards the guard began treating him differently, and he is worried the guard may vandalise his housing unit if it is left vacant.

Other residents and home owners opposed the presence of labourers. Ahmed Abdou, a resident in the area, said some labourers are drug addicts, who make a lot of noise and often knock on other people’s doors.

The fifth article of the Social Housing law 33/2014 states that it is forbidden to rent or sell a social housing unit before five years have passed since signing the original contract with the office which the housing unit is affiliated to.

The sixth article of the same law states that every rental or sale of a social housing unit violates the provisions of this law, and prohibits notaries from notarising such acts.

In April the housing minister took advantage of a decree granting employees of the Mortgage Finance Fund (MFF) the right to monitor the behaviour of the owners of social housing units, according to executive director of the social housing project Salah Hassan. This was done to prevent the sale or lease of their properties.

The Ministry of Justice issued a decree in 2014 to grant some MFF employees the right to arrest violators of law 33/2014 but it has yet to be used.

Deputy of the city council for 6th of October City Mohamed Abdel Maksoud said the city council must receive a complaint or a police record relating to the sale or rental of such units in order to take the required steps to strip the owner of that property. The owner would then be barred from applying or obtaining any kind of housing units from the government.

Abdel Maksoud revealed that the MFF is currently forming committees to investigate suspected cases of the illegal sale or lease of social housing units. He pointed out, however, that the city council cannot inspect every housing unit in order to ascertain the identities of its residents.