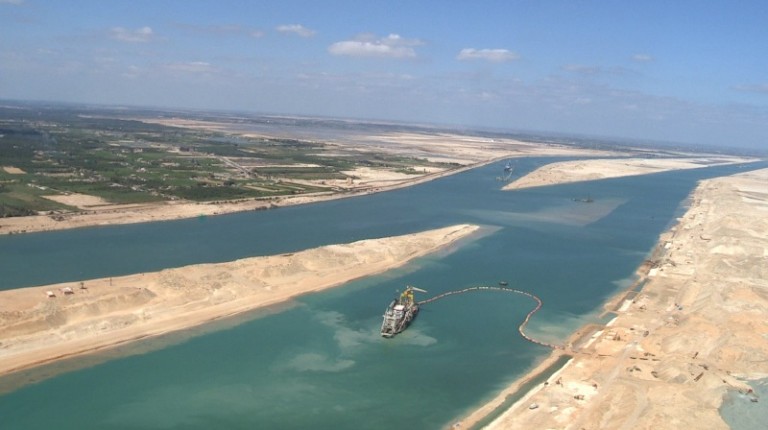 On 18 October, , said that Egypt has to focus on developing its investment climate instead of national projects.

However, nobody feels the economic effects of the three main national projects that Abdel Fattah Al-Sisi announced would be implemented when he became president over two years ago, including developing the Suez Canal area, the Golden Triangle project, and the reclamation of 1.5m acres.

Some opinions on Egypt’s national projects claim the government has not put in enough work on the projects, which could have a positive effect on the economy if implemented properly.

Other opinions believe that the projects have a particular purpose, which is to create jobs above all else. However, seeing this through rests on whether the projects will see the true light of day.

On 19 September, head of the Suez Canal Authority, Mohab Mamish, said that the Suez Canal Area Development Project will be underway in 2017. Coupled with the expansion works that will be carried out by the authority, the development project expects to bring in higher revenues.

Mamish said that the value-added projects will be implemented next year, in order to control the impact of world trade on the canal.

At the top of these projects lies the establishment of an arsenal in Adabiya port to manufacture ships in partnership with the Armed Forces National Service Projects Authority (NSPA), said Mamish.

However, experts are not totally satisfied with the government’s efforts in the national project, which was announced two years ago now. The time is running late for developing the Suez Canal area and investors don’t really know whether pumping in investments is a good idea at any given time.

Hany Tawfek, an economic expert, said that if the government really wants to develop the Suez Canal area, it has to construct competent infrastructure for electricity, water, gas, roads, and services.

The government must also fix the laws to reduce bureaucracy and to attract investors, because Egypt’s investment climate is hardly attractive at the moment, said Tawfek.

Tawfek believes it’s necessary for the government to provide concessions to investors in order to attract their investments to the Suez Canal area.

At the present time, the government is late in developing the area, he noted, emphasising that the Suez Canal and Sinai are very sensitive areas. It takes time for the military to check and revise the contracts of every project in both areas to make certain that all is in order.

However, there’s no transparency in what is actually going on there, according to Tawfek.

The late timing of the Suez Canal area’s development makes it difficult to gauge the government’s work, but each passing day adds to another potential loss for developing the Egyptian economy.

The expert sees that the Suez Canal’s best projects are ship services, such as welding and supplying ships, industrial projects, and agricultural projects.

Such projects could develop Sinai as well, he emphasised.

Medhat Nafea, an economic expert, said the economic feasibility of the new branch of the Suez Canal cannot be compared to developing its territory.

He believes that the government should be asked about their understanding of the economic feasibility. Yet, Nafea recognises that the project does create jobs, which is probably the main point of such national mega projects.

The government mainly focuses on creating jobs out of such projects, and developing the Suez Canal area would lead to 1 million job opportunities according to government statements, he said.

Nafea also noted that the government must find other ways to finance its national projects instead of borrowing.

He believes that Egypt’s external debt is not high, but he emphasised that the rate of borrowing is very scary, which explains that the government does not know other ways of obtaining finances.

On the other hand, Nafea said that national projects don’t usually develop a country.

He explained that fixing and developing the investment climate and creating new laws is what development is actually about, which the government must understand, he noted.

The Golden Triangle is one of many national projects that President Abdel Fattah Al-Sisi announced during his first years in office.

The triangle is located between Qena, Safaga, and Al-Qusayr, an area rich in mining sources that makes up 75% of Egypt’s mining minerals.

Before the Egyptian revolution in 2011, a lot of plans to develop the area were proposed to the officials of the ousted Hosni Mubarak regime, but no steps were taken toward developing the area.

When Al-Sisi took office, he instructed the cabinet to put the Golden Triangle development project at the top of its priorities for national projects awaiting implementation.

The project will be implemented over an area of 2.7m acres and aims to establish a new industrial capital by building an industrial, commercial, mineral, and touristic zone to serve Egypt, the Middle East, and the African region.

The region is rich in metallic and non-metallic minerals, including iron, copper, gold, silver, granite, and phosphate, which are involved in the manufacture of many high-tech economic industries.

Mining for these minerals could be used as part of the establishment of new industries.

The area where these minerals were mined in ancient times, which includes the old road that pilgrims used to reach Mecca, will be developed as new touristic locations.

Hany Tafek, an economic expert, said there is currently an almost comprehensive media blackout about the project.

He believes that Egypt is one of the top five countries in minerals reserves, and by taking the right steps in the Golden Triangle project, the country would benefit greatly economically and industrially.

Tawfek said that it is known that ancient Egyptian kings knew that this area contains gold and a lot of different minerals that could create a fortune for the country, but they preferred to save it for future generations.

The government must understand that making a clear economic environment is the most important thing for developing the country, he noted.

Tawfek said that investors do not know anything about the project up to now, which has kept the project frozen at a time when it could help Egypt attract investments and create more jobs.

However, Ismail Gaber, the head of the Industrial Development Authority, told Daily News Egypt that the Golden Triangle development project is considered the second largest project that will aid in developing Egypt’s economy due to the high income expected from the area once it is developed.

The implementation of the project began following the announcement of the proposal details, which took place in June, Gaber added. The project aims to attract new Arab and foreign investment, in addition to local investment, to enhance the value of the region.

The project also has a social dimension, said Medhat Nefea, an economic expert.

He added that the project will also help the government to develop Upper Egypt, which has suffered from a lack of development for decades, and it would lead to a reduction in the unemployment rate and then poverty.

On 30 October 2015, President Abdel Fattah Al-Sisi inaugurated the 1.5m acres reclamation project, which aims to increase Egypt’s actual agricultural land by 20% outside of the delta region.

Al-Sisi said the acres will be presented to the public for sale, a provision that is an investment in national food security as much as an investment in their individual futures. The Egyptian government will subsidise the appraised value of the land to enable large scale purchases.

Al-Sisi promised that the agricultural lands will not only provide economic stability to farmers, but will provide places of residence and services to them and their families.

Then, on 21 October 2016, Atter Hannoura, the head of New Egyptian Countryside Development (NECD), announced the offering of 500,000 acres as part of the project’s first phase, at a price of EGP 5,000 per acre.

However, experts fear that the project will not be a success.

Hany Tawfek, an economic expert, believes that the government has not enlisted enough studies on the project.

He explained that no one from the cabinet has created or released pre-feasibility or feasibility studies for the project, which does not reflect transparency.

Tawfek noted that it would not be the best idea if the government were to plant wheat in the project. He explained that it’s much cheaper for Egypt to import wheat because there are bigger countries operating in this field and Egypt cannot compete with their prices.

It will cost Egypt more than global prices for wheat if it wants to plant the crop, he stated. Tawfek added that the countries that export wheat with low prices depend on rain to grow it, unlike Egypt, which needs water well drilling projects to plant the crop in the desert.

From another point of view, Gamal Seyam, a professor of agricultural economics at Cairo University, said that the project so far is characterised by chaos and is improvised to a large extent.

He added that there is no real transparency, explaining that most of the information we have is more or less day-to-day and derived from the media.

Whether haphazard or intentional, the reclamation project is clouded in an opaque haze.

Former minister of irrigation Nasr Allam is bemused by the state’s actions, saying that “the targets are not clear”, in spite of presidential statements.

He explained that the modern Egyptian state has embarked on a number of large agricultural projects since 1952, beginning with the popular land reform under former president Gamal Abdel Nasser, the Salihiya under Anwar Al-Sadat, and the infamous Toshka project under Hosni Mubarak.

These projects rarely met purported targets, and in some cases the projects even collapsed, according to Allam.

It is worth noting that Eid Hawash, the media consultant at the Ministry of Agriculture, has been keen to distance any historical resonance with these failures. “This project can’t be compared to previous projects, such as Toshka, which failed due to the absence of rigorous control and supervision, as well as other political objectives. It is not the case this time.”