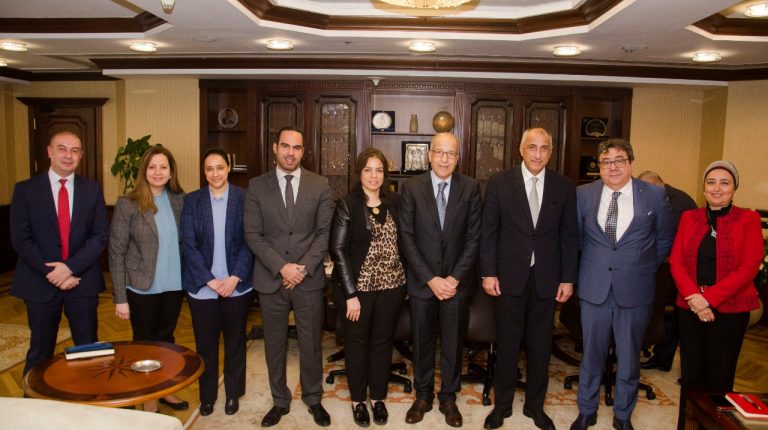 Governor of the Central Bank of Egypt (CBE),Tarek Amer, received the Libyan Central Bank Governor Sadiq al-Kabir and the Director General of the Libyan Foreign Bank, Mohamed Najib Al Jamal, in the framework of strengthening the joint cooperation between Egypt and Libya in all fields, especially the economic sphere.

According to a statement issued by the CBE, the two sides held a meeting to discuss ways of exchanging experiences and cooperation in many fields, especially technical support and training, pointing out that the meeting witnessed a unanimous agreement on how to manage joint investments in the banking sector and the recent reform steps carried out by the CBE.

During the visit, the Governor of the Libyan Central Bank and the Director General of the Libyan Foreign Bank praised the achievements of the Egyptian economy, supported by the ambitious economic reform programme adopted by the Egyptian leadership, which received the approval of all international economic and banking institutions.

In April 2013, Libya deposited $2bn at no interest at the CBE, as part of an aid package received by Egypt from a number of Arab countries. The CBE repaid the deposit in April 2018.

According to the CBE, the visit of the Libyan delegation showed total comprehension of the vision of the joint economic issues, economic reform, and the importance of continuing coordination between the two sides to maximise mutual benefit, and pave the way for further cooperation between Egypt and Libya in all economic fields.

Furthermore, Tarek Amer witnessed the inauguration of Bank ABC’s new headquarters in New Cairo, in honour of the two Libyan guests, where the Libyan side holds shares in Bank ABC, the Arab International Bank, the SAIB, and the Suez Canal Bank.