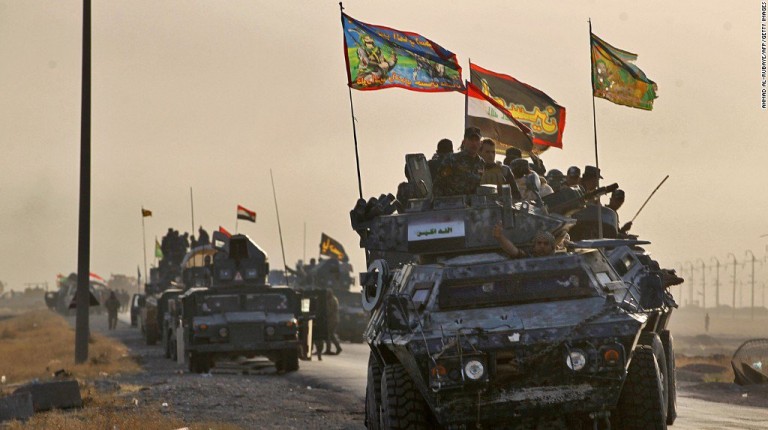 The Egyptian Ministry of Foreign Affairs expressed Egypt’s full solidarity with the Iraqi government and its people in their fight against the Islamic State (IS) and the battle to liberate Mosul which began early on Monday. The city was seized by IS in 2014.

The Egyptian government and its people are hoping for the successful liberation of the city from IS control, according to a statement issued by Foreign Ministry spokesperson Ahmed Abou Zaid.

“IS is a terrorist organisation that will not be able to resist the nations’ will—all who follow its strategy or adopt it are terrorists,” the statement read.

Iraqi prime minister Haider Al-Abadi officially declared the launch of a military campaign to restore Mosul early on Monday. In his broadcasted speech, he called on the residents of Mosul to actively cooperate with the Iraqi armed forces.

The Iraqi armed forces have been finalising military preparations for the past three days. The liberation operation is being carried out by elite forces from Iraq’s counter-terrorism apparatus and police forces, in addition to aerial coverage provided by the Global Coalition Against Daesh.

Al-Abadi said that the only forces entering the city are police and army personnel; however, Al-Hashd Al-Sha’abi (The People’s Mobilisation), an Iraqi state-sponsored group consisting of mainly Shi’a militias, have declared that they will participate in the battle for Mosul.

The military operation is expected to displace a massive number of Mosul residents; therefore, Al-Abadi has formulated trained groups to evacuate and provide shelter for displaced residents.

Expert on current Islamic movements Ahmed Atta told Daily News Egypt on Monday: “The leader of IS declared that his fighters will fight until they die. He threatened to burn the oil wells in the city. The Iraqi forces are not strong enough to end the battle immediately; it may extend for more than three weeks.”

The Iraqi armed forces along with police and the Peshmerga [military forces of the autonomous region of Iraqi Kurdistan] initiated the military liberation operation, Atta said, adding that Turkey started actively participating slightly later due to its “refusal of Peshmerga forces” as there is an ongoing conflict between the Kurds and Turkey.

According to Atta, the Iraqi government and the Global Coalition did not provide a safe shelter for civilians until the launch of the battle for Mosul. “Civilians inside Mosul are at risk of mass slaughter amid the ongoing clashes between IS and Iraqi forces,” he said.

Contrary to the group’s statement, Atta claims that Al-Hashd Al-Sha’abi is not participating in the battle. “The group has committed countless violations and massacres against Sunni tribes in several Iraqi cities, so the Iraqi government preferred to suspend its participation,” he said.

The United Nations has warned of the dire consequences on Mosul’s population of one million that may result from this military operation.

The US said that, in liberating Mosul and other Iraqi lands that are under IS rule, the Iraqi people will achieve victory against a “common enemy”. The US secretary of defence said that the US and other countries in the Global Coalition are ready to support Iraqi and Peshmerga forces in combating IS in this “difficult battle”.

Life returns to Mosul neighborhoods freed from IS

Mosul: the last stand for ‘Islamic State’ in Iraq