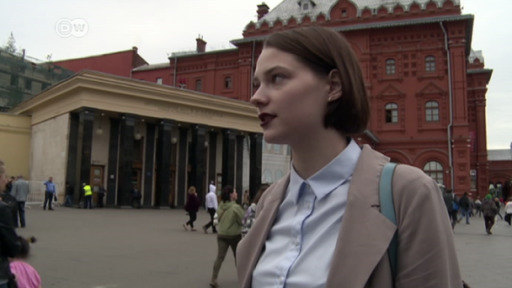 As traditional protests become increasingly difficult in Russia, one group of activists has found its own way of voicing dissent. The “Silent Protest” movement has made demonstrating part of an everyday routine.
A commuter in a purple tie narrows his eyes behind rimless glasses. A young man dressed all in black leans forward on his skateboard. They are straining to read a small poster Sasha Alekseeva has attached to her blue backpack. Today’s poster reads: “Have your blood analyzed and register as a bone marrow donor.”

Sasha Alekseeva sits with her backpack on her knees, legs crossed, looking at her phone. Occasionally she looks up, looks around – her aim is to look approachable. The twenty-year-old student has been riding the metro with a variety of political and social messages stuck to her bag since April. She is one of around 80 activists, mainly young women, who have taken part in “Tikhy Piket” – the silent protest movement. They take political and social posters with them everywhere they go – and then write about the reactions their messages elicit online.

Today the reactions are as subtle as the protest itself. “Several people came up and thanked me. And I saw two girls taking a picture of me,” Sasha explains outside of a metro station in the center of Moscow. “Usually people smile, they ask if they don’t understand something on the poster, they thank you. Negative reactions are rare.”

Sasha Alekseevna designs a new poster every week. Some of her old ones have read: “Feminism is a movement for equality. Women are still oppressed. I want to be a full member of society, not a decoration,” or “If I hug my boyfriend on the subway, is that heterosexual propaganda?” – a reference to Russian laws which deem ‘homosexual propaganda’ illegal.

The goal of “Tikhy Piket” is to start a public discussion about any topic that the activists feel needs public discussion in Russia: freedom of speech, discrimination, domestic violence. “Very often you can convince someone, even if it doesn’t seem like it at first,” Sasha says.

The activists chose their own protests topics. “Tikhy Piket” tries not to be prescriptive or hierarchical. Anyone who carries a poster and then writes an account of the experience online using the hashtag #тихийпикет, meaning #silentprotest, is considered part of the movement. “Tikhy Piket’s” page on Facebook and on the Russian social media site VK do suggest a broad common outlook: a stance against discrimination of all types – including against members of the LGBT community. The founder of the movement has called the group an “intersectional feminist group.”

For Sasha, the strength of Tikhy Piket lies precisely in its openness. She hopes Tikhy Piket will inform as many people as possible in order “to form a politically aware civil society.”

“The problem in Russia is that everyone is waiting for some kind of messiah to lead us all to revolution,” Sasha explains. “But actually you need a lot of people, normal people – not heroes – to start to see themselves as political subjects and change something.”

Tikhy Piket does hope for political change in Russia – “a democratic government, honest elections,” as Sasha puts it. But even changing long-established social patterns can be a revolutionary act, according to the activist. “It’s very important for people to know that personal things are political. Just because your grandmother gave birth to eight children out in the field and then went back to work – that doesn’t mean you have to live like that, too.”

Sasha and the other young activists are unusual in Russia. In August, ahead of the upcoming Russian parliamentary elections, the independent Levada Center did a survey of whether Russians think they can influence the decisions of the government. 87 percent of 18-24 year-olds said they didn’t think so, or that it was unlikely.

Tikhy Piket is all the more radical in a country where protesting is becoming increasingly difficult. Following a wave of anti-government protests in 2011-2013, the Russian authorities ramped up protest laws. Any peaceful demonstration now has to be approved by the government in advance. Even then, it can land demonstrators with jail sentences of up to 5 years, or crushingly large fines. Even single-person protests, which do not have to be approved, have landed activists in prison.

When Sasha initially found out about Tikhy Piket online, she was drawn to it because it seemed to be less dangerous than traditional protests. She wants to study abroad, and jokes that a jail sentence would be “inconvenient.” “They probably won’t put me in prison for slogans on a backpack. But then people have joked that there’s a first time for everything,” Sasha laughs.

A new form of protest

In the evening, Sasha sits barefoot on the sofa in her living room with Daria Serenko, the founder of Tikhy Piket. Since Daria started the movement in March, she has made over 200 posters. Mostly, the activists communicate online, but Sasha and Daria have become friends. Sasha was the first person to join Daria’s “Silent Protest.” Here at Sasha’s small Moscow apartment they are looking at some of their old posters and discussing their newest ones.

Daria’s is about the upcoming parliamentary elections. In reference to Putin’s “United Russia” party, it reads: “‘If not us, then who?’ is not an argument in a society that sees its citizens as equals and not as a herd.” The poster also says: “Any form of protest is demonized in Russia.”

In part, Tikhy Piket is an attempt to counteract the negative image that protesting has in the country, by creating a softer, friendlier type of demonstration, Daria explains. The movement’s social media pages state that “real protests” can be aggressive and do not permit interaction with the public. Participants in “Silent Protest” are advised not to hold their posters up demonstratively, as they might in a traditional protest. Instead they strive to be part of the public space, citizens on the subway, like everyone else.

“Tikhy Piket tries to treat everyone the same way,” Daria says. She hopes the protest movement will allow people with different political opinions to communicate, rather than to simply “brand each other as enemies.”

Daria explains that in Russia, people often see opposition figures as unpatriotic traitors, while the opposition brands people brainwashed. “But when you take the decision to talk to a person, then he or she is a person to you, and not either an opposition figure or a Russian patriot. And in that case you can have a real dialogue.”

Both Daria and Sasha hope that their activism can change Russian society, even if the process is slow.

“I can probably never know whether a poster changes someone’s life,” Daria explains, adding: “In adventure stories, people sent messages in a bottle. They never knew whether the letter would reach the addressee. For me, Tikhy Piket is just that – a message in a bottle.”