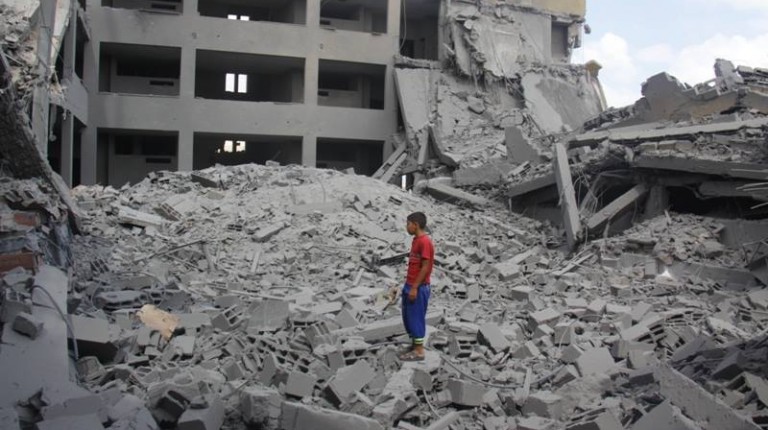 President Abdel Fattah Al-Sisi discussed a number of foreign affairs-related issues with the editors-in-chief of the three major state-run daily newspapers—Al-Ahram, Al-Gomhuria, and Akhbar Al-Youm—whom he met with on Sunday.

In the first of a two-part interview published by the newspapers on Monday, Al-Sisi spoke about Egypt’s relationship with the Gulf countries, Europe, and the US, as well as the Palestinian cause and ongoing cooperation with Russia. He also spoke about cases that sparked controversy, such as the death of Giulio Regeni and the Red Sea islands of Tiran and Sanafir.

According to Al-Ahram’s editor-in-chief Mohamed Abdel Hady Allam, the interview took seven hours. The second part of the interview, which focuses on domestic affairs, will be published on Tuesday.

Al-Sisi asserted the significant role of Egypt in mediating between Palestine and Israel through peace negotiations, revealing that Russian President Vladimir Putin expressed willingness to host the two parties for direct talks in Moscow.

“Unfortunately, the case is like stagnant water and requires international will and effort. There is more and more conviction on behalf of the Israelis of the importance of the peace process, which is a positive indication,” he said.

This comes as Egypt has renewed diplomatic ties with Israel. A high-level Israeli delegation arrived to Cairo on Sunday from Tel Aviv to meet with Al-Sisi, following Foreign Minister Sameh Shoukry’s visit to Israel in June.

Al-Sisi stressed that Egypt’s relations with Gulf countries, especially Saudi Arabia and the UAE, are as strong as possible, and it is unfortunate that some limit the ties to the financial support they provide to Egypt.

Al-Sisi said that the Egyptian military’s involvement in the Arab coalition intervening in Yemen is limited to navy forces in the Bab Al-Mandab straight. On Syria, the president stated Egypt’s five principles in dealing with the issue, which support a political solution based on the will of the people and the disarming of extremist militias.

“We have traced a movement of those terrorist groups from Syria and Iraq to Libya, given the pressure they have been facing. We assist the Libyan National Army under the command of Khalifa Haftar and are standing by to face any border threats,” Al-Sisi stated.

The president expressed positivism about the potential return of Russian tourism, adding that the Russian aeroplane crash did not destroy the ties between the two countries.

In November 2015, Russia suspended its flights to Egypt following an Islamic State-affiliate claimed attack on the Russian Metrojet A321 passenger jet, which crashed in Sinai on 31 October, killing all 224 passengers and crew on board. Since then, Russia has been sending delegations to work with Egypt on improving airport security.

The relationship with the US is improving and has developed over the past three years, stated Al-Sisi. In response to a question on presidential contacts with the electoral campaigns of rival presidential candidates Donald Trump and Hilary Clinton, Al-Sisi said they were in contact “with all political sectors”.

Amid tensions between Turkey and Egypt, which began in 2013, Al-Sisi was asked about his opinion on statements against Egypt made by Turkish officials, which the president preferred to dismiss. “We are giving them a chance to review their positions, but so far, there is no improvement in relations. We will only respond when it is worth it, and in an objective manner,” he stated.

Affirming once more his compassion towards the family of murdered Italian researcher Giulio Regeni, Al-Sisi said he believed that the talks that took place between different delegations from the two countries “proved mutual cooperation, even if the case is still under investigations”.

Meanwhile, Al-Sisi critcised the role of the media in complicating the case, but praised Italian prime minister Matteo Renzi’s “positive statements”.  Renzi, along with deputy minister of foreign affairs Mario Giro, had criticised the University of Cambridge, accusing it of not cooperating with the Italian prosecution in the case.

Several Egyptian delegations of prosecutors and politicians met with Italian officials in Rome over the case. Despite their positive claimed feedback, the visits did not prevent the Italian parliament from deciding to partially halt the supply of military aeroplane spare parts to Egypt.

A maritime border demarcation deal signed between Egypt and Saudi Arabia in April would have facilitated the transfer of the two Red Sea islands of Tiran and Sanafir to Saudi Arabia. However, in Egypt there was popular rejection of the cession of sovereignty rights.

Al-Sisi said the matter was in the hands of the parliament and that Saudi Arabia was “understanding” of constitutional procedures.

However, the case is not with the parliament, as it is currently being looked into by an administrative court. An initial verdict issued in June by the State Council nullified the agreement and concluded the islands to be part of Egyptian territory. The government appealed the verdict and the court continues to look into the case.

Yet, Al-Sisi defended the agreement, claiming it is “an opportunity to excavate Red Sea resources”.

Planting the seeds of sustainability in Palestine

US slams Israel for settlement acceleration in West Bank

What Donald Trump said about Mexico

Russia returns as international power at the expense of Syria, US manages the conflict instead of ending it: Al-Ghad Al-Soury Movement office director

There are no detainees in Egypt: Al-Sisi

Turkey must respect the will of the Egyptian people for relations to resume: Foreign Ministry

Al-Sisi to visit India ahead of G20 summit

Trump wants to partner with Al-Sisi, Abdullah of Jordan and Israel to fight IS