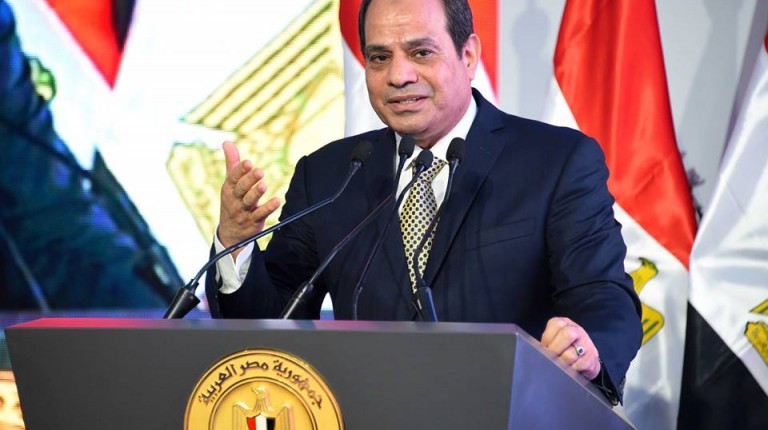 All perpetrators of the assault against the elderly woman in Minya will stand trial no matter their numbers, President Abdel Fattah Al-Sisi said during a speech he delivered on Monday morning while inaugurating the first and second stages of the Al-Asmarat housing project in Moqattam.

“The violence committed against this Egyptian woman is not acceptable. I ask her to not be angry about all that has happened as every single perpetrator will be held accountable,” Al-Sisi said, stressing that he will not allow the recurrence of such an incident again in Egypt.

Al-Sisi confirmed the necessity of law enforcement in the aforementioned incident, noting that state institutions hold women in the highest respect.

On Sunday, Minya Archbishop Makarius told Daily News Egypt that the presidency has the same stance as the church, which is that the law must be enforced first and the perpetrators must stand trial.

Meanwhile, the president criticised several documentaries produced by foreign organisations, such as Qatar-based Al Jazeera, to highlight the hardships of various communities and underprivileged citizens’ standards of living in Egypt. He argued that the main aim of these films is to pass judgment on the country and the government.

“I will not allow anyone [to imply certain things about the government] by producing movies that document the circumstances of poor citizens, especially as we are here today to launch these new residential areas to give Egyptians a new standard of living,” he said.

The production of these documentaries must be prevented, the president added, saying that multiple showings or reports produced by other channels, in reference to Al Jazeera, “is not acceptable”.

Before the president’s speech, a documentary produced by the Armed Forces’ media office about the new residential area in Moqattam was screened. The film showed footage from an Al Jazeera report about underprivileged residential areas in Egypt, which was countered by references to the housing projects for low-income citizens.

Al-Sisi called on Egyptians to not listen to rumours and negative stereotypes about the lifestyle of those living in poorer districts. He said they are also Egyptian citizens who enjoy the same legal rights as everyone else. The state supports them, the president said, asking those in the media to support them by not only showing their poor living conditions, but also by accompanying the citizens in their move to the new, well-built residential areas.

The first and second stages of Al-Asmarat housing project in Moqattam includes 12,800 apartments, which were established at a cost of EGP 1.5bn as part of a state strategy to build such similar residential areas in Al-Doweka, Astabl Antar, and Ezbet Kheir.

The first stage of the project is being built on an area of 65 acres, which includes 6,258 apartments at a cost of EGP 850m, funded through Cairo governorate’s development budget. The second stage will be financed by Tahya Misr fund on area of 61 acres owned by the Armed Forces. This stage will include the launch of 4,722 apartments.

Sectarian strife in Minya leads to looting, torching houses and attacks on Christians