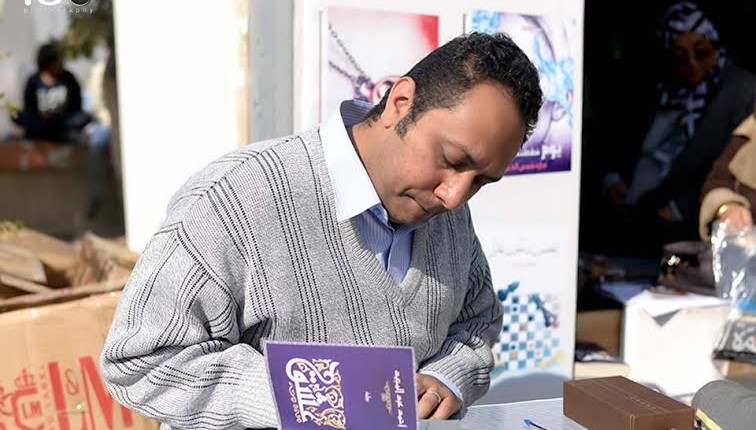 “True Love is the pure happiness that’s free of any fears. It’s about loving for the sake of love itself. Does sun wait for people’s actions to decide if it will send them its light or not? Does it think if people on earth deserve its tender or bid? Sun sends us its light under all circumstances because it enjoys shining and it doesn’t wait for anything in return, that’s what true love is about!”

By these sentences, writer Ahmed Abdel Mageed defines his remarkable understanding of love in his outstanding novel “Eshq”. Although he studied Computer Science at Cairo University, he was always drawn to writing giving it the first priority in his life.

In 2013, the 35-year-old writer published his first novel “Tarnemet Salam” (“Hymn of Peace”) that was nominated to win Sheikh Zayed Book Award in its 8th session. After two years, He published his second novel “Eshq” (“Passion”) to satisfy the needs of his awaiting readers.

In an exclusive interview with Daily News Egypt, Abdel Mageed discussed the controversial ideas in his novels, replied to readers’ criticism and accusations and explained how the Egyptian book market has changed dramatically over the past few years.

When did writing start dominating your life? And does it have anything to do with your childhood?

When I was a little child, my parents were so keen to bring all the children magazines that were available in the market at that time and they used to read them for me. That’s how my passion for reading and writing started, as I wanted to imitate what I was reading.  I used to bring my drawing notebooks and try to copy the drawings and the pictures I found in Mickey and Sameer magazines, Egyptian children’s magazines, and tried to make up other different stories on those pictures. When I was a teenager, I used to read the series of “The Five Adventurers”, “Ragol Al Mostaheel” and “Malaf El Mostaqbal”, which played a crucial role in attaching me to the magical world of writing.

Did you face any problems to publish your first novel “Tarnemet Salam”(“Hymn of Peace”)? And what are the most popular obstacles the novice writers face when they publish their first novels from your point of view?

I kept sending “Tarnemet Salam” to different publishing houses for many months. Some of them refused to publish it and others ignored me, until I sent a copy to “Non” publishing house that was enthusiastic to publish it. However, I think that the Egyptian book market has changed dramatically over the past few years. In the past, the writer had to wait for many years until he finds a good publisher and unfortunately some writers couldn’t get their literary works to light despite the long years of painstaking research. However, after the 25 January Revolution, things became much easier so I can’t claim that I faced real obstacles. Many publishing houses decided to adopt and support the young talents. However, I see it as a double edged weapon as some of these houses try sometimes to exploit the young writers, which affects their name in the market afterwards.

In your first novel “Tarnemet Salam” (“Hymn of Peace”), you took readers into a journey in which the main character was searching for the inner psychological peace and satisfaction. So how could you prepare for such novel? And what are the main messages you wanted to convey to your audience?

After long years of reading about spirituality, trying to get into these experiences through meditation and contemplation, I found out that I had huge amount of feelings and thoughts that need to be formulated and phrased in words. I wanted to convey a main message to my beloved audience; I wanted to tell them that we live in a friendly, amiable world that we can ally with, unlike most of people think. I also wanted them to feel capable of taming and exploiting the surrounding world to meet their own needs and interests!

In spite of the great success “Tarnemet Salam” achieved, it was faced by a lot of criticism because of the direct advice style and the narrative time gaps the novel includes. Also, many readers compared it to “The Forty Rules of Love” by Elif Shafak as it carries the same psychological perspectives and reflections. So how did you receive these criticism waves and how did you respond to them?

I always believe that the novel art shouldn’t include preaching or addressing direct advises that can be found in articles and speeches instead. Actually, I believe that my novel didn’t provide direct advises to the readers, however, it tended more to present some direct spiritual meanings and thoughts in some parts of the novel. For example, the main character in the novel meets a spiritual guide though his journey and that person trained him to practice some spiritual exercises over long periods of times helping him discover various thoughts, meanings and life experiences on his own. The guide didn’t tell him do this and don’t do that, he just gave him a clue.

Other readers accused me of quoting ”The Forty Rules of Love”, although I honestly didn’t read that novel before I wrote mine! Although I read it after the fierce attacks I received, I couldn’t actually understand where the similarity between the two works lies. The first novel talked about love, friendship and accepting others, while mine talked about searching for inner peace and finding yourself.  However, many readers explained that reading the two novels gave them the same nice refreshing feeling.

Over time, I realised that most Arabic readers didn’t read spiritual or “Sufi” literature before, and when they found two novels that belonged to the same genre, they thought the first one was the original and the second was an imitation. Most of them also thought that Galal Eldin Al-Romy was a fictional character in the “Forty Rules of Love”, so when I started my novel with some of his poems, they thought that I was copying the Turkish novel. As you see, every accusation has a convincing justification!

Your second novel “Eshq” (“Passion”) tackled the idea of true love that most of people don’t know about in your opinion. Would you please explain the special meaning of love you wanted to convey through this novel and how did you acquire such concept?

Eshq novel tackles the following questions: “Do we really love when we claim that we’re in love?!”; and “When we love somebody, do we love him for himself or we just love our own image that’s reflected in his eyes”?!

I used to notice that the love stories we hear about everyday were always full of misery, pain, separation, abandonment, jealousy and sufferings although the real love is a noble and delightful feeling that’s supposed to spread joy and happiness. So I kept asking how this contradiction exists. After meditation and thinking, I found out that the common love can’t be called “real love”, but it’s more like “a conditional love”, where ego is always disguised in the form of love. We love ourselves and search for a person who can nourish that ego inside our souls and that’s why we live in a continuous fear of getting dumped by our lover. We become afraid of losing what this person provides us with. This can never considered real love because real love is unconditional so the person’s feelings shouldn’t change according to his lover’s actions and reactions. He will love him unconditionally until the very end and won’t wait for anything in return.

How do you come up with ideas for your novels? And how do you prepare for them?

I always get confused when people ask me “how did the idea of that novel come up to you mind?”, because I don’t know the answer. Ideas pop up in one’s mind suddenly and without any preliminaries as they always impose themselves on the writer. However, my ideas are always attached to the questions that occupy my mind. The preparation stage takes a very long time. I usually put the ideas on a paper and start drawing a scheme for the climax and its improvement throughout the incidents of the story. I always establish a portfolio for each character that contains its main characteristics and its relationships and conflicts with other characters in the story.

Who are your favourite novelists who affected your writing style significantly?

I can’t deny that Naguib Mahfouz and Dostoevsky influenced the way I see life and love significantly. I was affected by many other writers at some stages of my life, but I could overcome these effects at older stages.

What are your future literary projects? And did you receive any offers to turn your novels into films or plays?

There’s a theatrical troop who decided to turn “Tarnemet Salam” into a play, but unfortunately the project stopped because they lack the required financial support. I don’t really have any future plans for my upcoming novels yet, because I need a lot of time to start thinking about new idea that will interest large proportions of the Arabic readers.