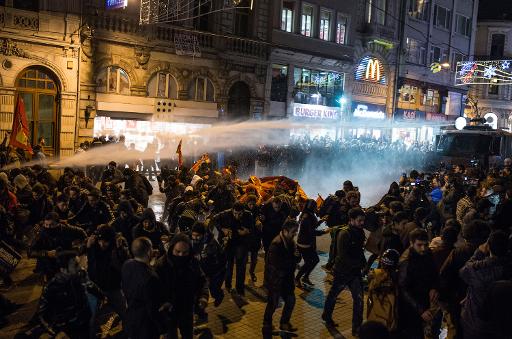 AFP – Turkey’s foreign minister said Sunday the country was ready to discuss all issues with the European Union at high-profile talks this week, including a row over judicial independence that has escalated the crisis engulfing the government.

The controversy over Prime Minister Recep Tayyip Erdogan’s bid to increase his control over Turkey’s top judicial oversight body, the Supreme Board of Judges and Prosecutors (HSYK), has dealt a new blow to the country’s long-held goal of EU membership just as Erdogan prepares for a crunch day of talks in Brussels on Tuesday.

Turkish foreign minister Ahmet Davutoglu said the judiciary issue and all others were on the table in the EU talks, but defended the embattled Erdogan government’s response to the corruption scandal that sparked the current political crisis.

“We are ready to discuss everything, including the HSYK,” said Davutoglu, who is due to accompany Erdogan on his trip.

“If there is anything that stands contradictory to EU standards, we will listen to this.”

In the wake of a December anti-corruption probe that has ensnared some of Erdogan’s key allies, his government has taken a series of retaliatory measures, including a mass purge of police and prosecutors, and has sought to curb the powers of the HSYK.

The government’s purge has extended to banking and telecoms oversight bodies as well as state television.

Local media reported Saturday that three high-ranking officials with top banking watchdog the Banking Regulation and Supervision Agency (BDDK) had been removed from their posts.

Five department chiefs from the Telecommunications Directorate (TIB) regulatory body have also been fired, as well as a dozen people at Turkey’s state television channel, TRT, including senior news editors and department heads, the reports said.

Erdogan accuses supporters of Fethullah Gulen, an influential Muslim cleric who lives in the United States, of waging a “coup plot” in the run-up to elections this year.

The prime minister’s move to curb the powers of the HSYK has drawn criticism from European leaders.

Erdogan’s Brussels trip will be his first visit since Turkey resumed EU membership talks in November after a three-year freeze, but EU officials warn the crisis has spoilt the “new momentum” in relations between the predominantly Muslim country and the 28-member bloc.

Brussels has urged the government to address the corruption allegations in a “transparent” and “impartial” manner, and the Council of Europe has warned that Turkish moves to “politicise” the judiciary would weaken trust in the state and jeopardise democracy.

“Judicial independence is a must,” Davutoglu told reporters in the southern Turkish province of Adana.

“But the executive has the freedom to develop its own policies,” the foreign minister said.

“We are ready to listen to any criticism or any view raised in the European Union as long as those criticisms and views are based upon EU standards and norms.”

He warned Brussels not to take a “discriminatory attitude” toward Turkey, suggesting the proposed changes to the HSYK were comparable to existing laws in various EU countries.

“If there is anything that is against the EU standards, we will listen to this, but we will ask one by one how the situation is in Europe, in Spain, in France,” he said.

He urged the EU to immediately open Chapters 23 and 24 in membership negotiations — policy areas governing the rule of law and the judiciary.

“Let’s negotiate them as soon as possible,” he said. “We will never back down on democratic standards.”

Davutoglu also signalled that the government was working on a new package of democratic reforms, but did not elaborate.

“We will easily overcome this crisis… and Turkish-EU relations will proceed on a more solid ground,” he said.

Turkey’s efforts to join the EU formally started in 2005 but stalled over several stumbling blocks, including a territorial dispute with member state Cyprus and opposition from heavyweights France and Germany.