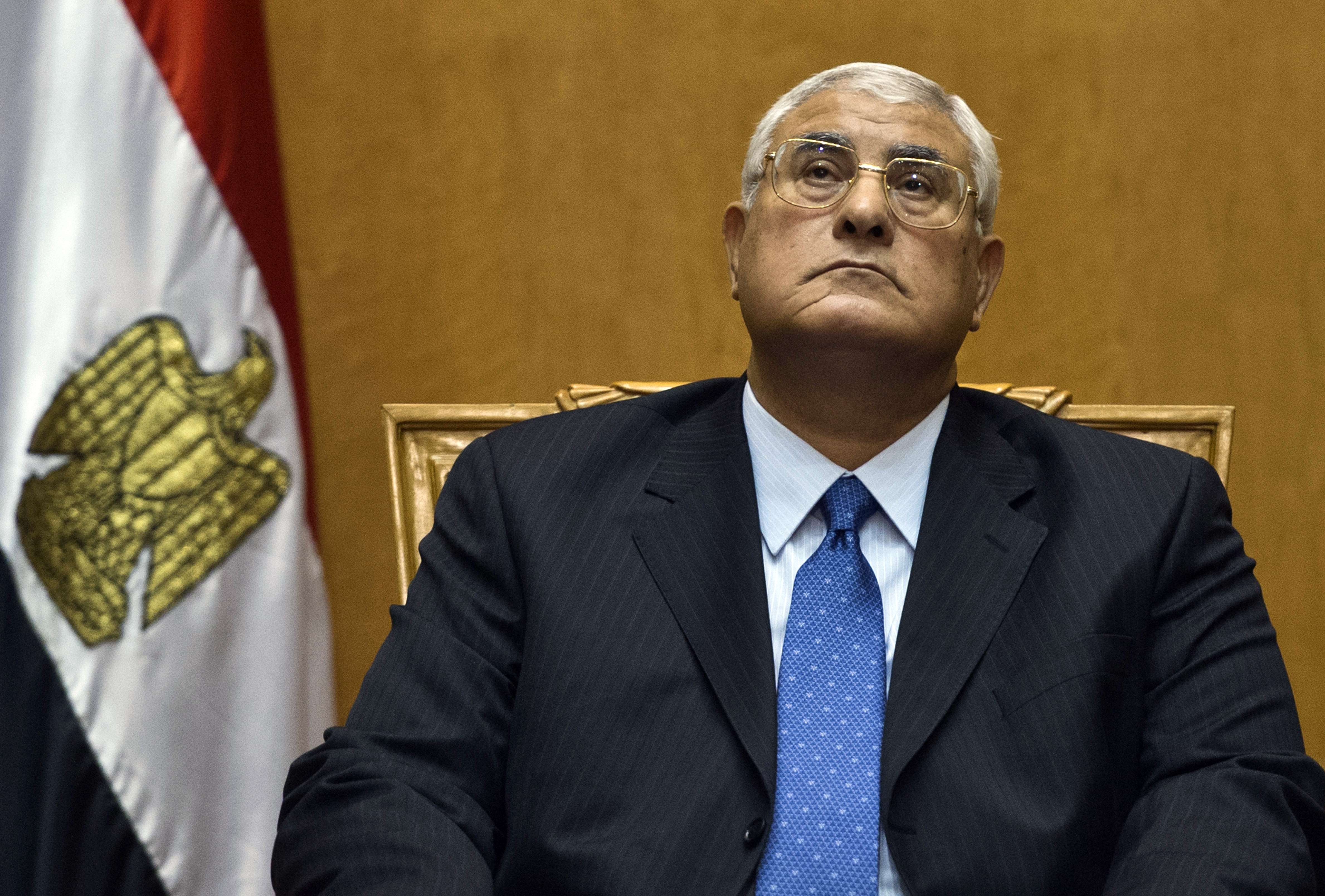 Interim President Adly Mansour issued on Sunday the Protest Law drafted by the Ministry of Justice and approved by the cabinet to regulate the right to peaceful assembly.

The draft law had been widely criticised by domestic and international human rights organisations since it first passed on 10 October.  A number of domestic political movements also condemned the draft law.

Though Mansour has the necessary legislative authority to amend the draft law before passing it, the version the interim president passed stayed closely faithful to the final version approved by the cabinet and passed to the presidency on 12 November.

The text of the law was read at a press conference held by Presidential Spokesman Ihab Badawi on Sunday evening.

Article 5 of the law prohibits any assemblies for political purposes in places of worship. It also prohibits launching marches from or to houses of worship.

Article 6 bans protesters from carrying weapons, explosives, fireworks or any other equipment which might endanger people, institutions or possessions; it also bans wearing masks for the purpose of committing the aforementioned acts.

The law would potentially prohibit holding strikes or calling for them, as Article 7 prohibits “calling for or stalling production.” It also prohibits blocking roads.

The Protest Law requires that organisers of any public assembly, be it a protest, march or general meeting, submit a written notice to the nearest police station with their plans at least three working days in advance. If the public assembly concerns elections, then the notice is reduced to 24 hours. The notice must include the location of the assembly, its route (in case of a march), the time it would begin and end, the demands it raises and the slogans it will use. It should also include the names of the assembly’s organisers, their area of residence and contact information.

Article 10 of the draft law allows the Minister of Interior or the concerned security director to cancel, postpone or change the route of a protest should either acquire “serious information or evidence that the assembly would threaten national peace and security.” The assembly’s organisers should be notified with such a decision at least 24 hours before the assembly’s set date. Organisers can appeal the decision at the first degree special court.

The law allows security forces “dressed in uniform” to disperse a public assembly if any of the participants commit a crime punishable by law or a “non-peaceful act”. Security forces are also allowed to arrest the perpetrators.

While dispersing the public assembly, security forces should begin by calling on participants to leave the assembly and provide them with safe exits. Should the participants fail to comply, security forces can begin using water cannons, batons and teargas. If the aforementioned prove fruitless, security forces have the right to “gradual use of force” where they can; including firing warning shots or sound bombs, use rubber bullets, and then use birdshot.

If the protesters resort to firearms, Article 13 entitles security forces to respond in proportionate measures according to their right to “legitimate self-defence”.

According to the new law, the Minister of Interior should allocate a “buffer area” where all general assemblies are banned. Such buffer areas are to exist outside “vital institutions” such as; presidential headquarters, legislative entities, governmental entities, judicial entities, foreign missions and embassies, police stations, military institutions, archaeological sites, museums, and educational facilities.

Governors are to allocate areas where citizens are free to hold “peaceful” general assemblies without prior notice.

The law punishes those who possess weapons during a general assembly by imprisonment for seven-years and/or an EGP 100,000 to 300,000 fine.

The violation of this law would be punished by a two-to-five-year imprisonment and/or fines between EGP 50,000 and 200,000, while holding a protest without prior notification would be fined by EGP 10,000 to 30,000. In addition, any citizen who receives money or benefits from illegal protests will be punished by imprisonment and a fine between EGP 100,000 and 200,000; the punishment is also valid for those inciting this crime even if the crime is never committed.

The draft Protest Law received wide criticism from a number of domestic and international human rights organisations. Human Rights Watch said the draft law gives the police “carte blanche” to ban protests in Egypt, while Amnesty International warned the draft law would “pave the way for further bloodshed”.  A group of 17 domestic civil society organisations said that the draft law aims to normalise the state of emergency and turn it into a permanent state.

Most organisations pointed out that the law was more repressive than previous version which the now-dissolved Shura Council tried to pass when ousted President Mohamed Morsi was in power. The draft law proposed during Morsi’s year in power prevented the Ministry of Interior from cancelling protests without resorting to the judiciary.