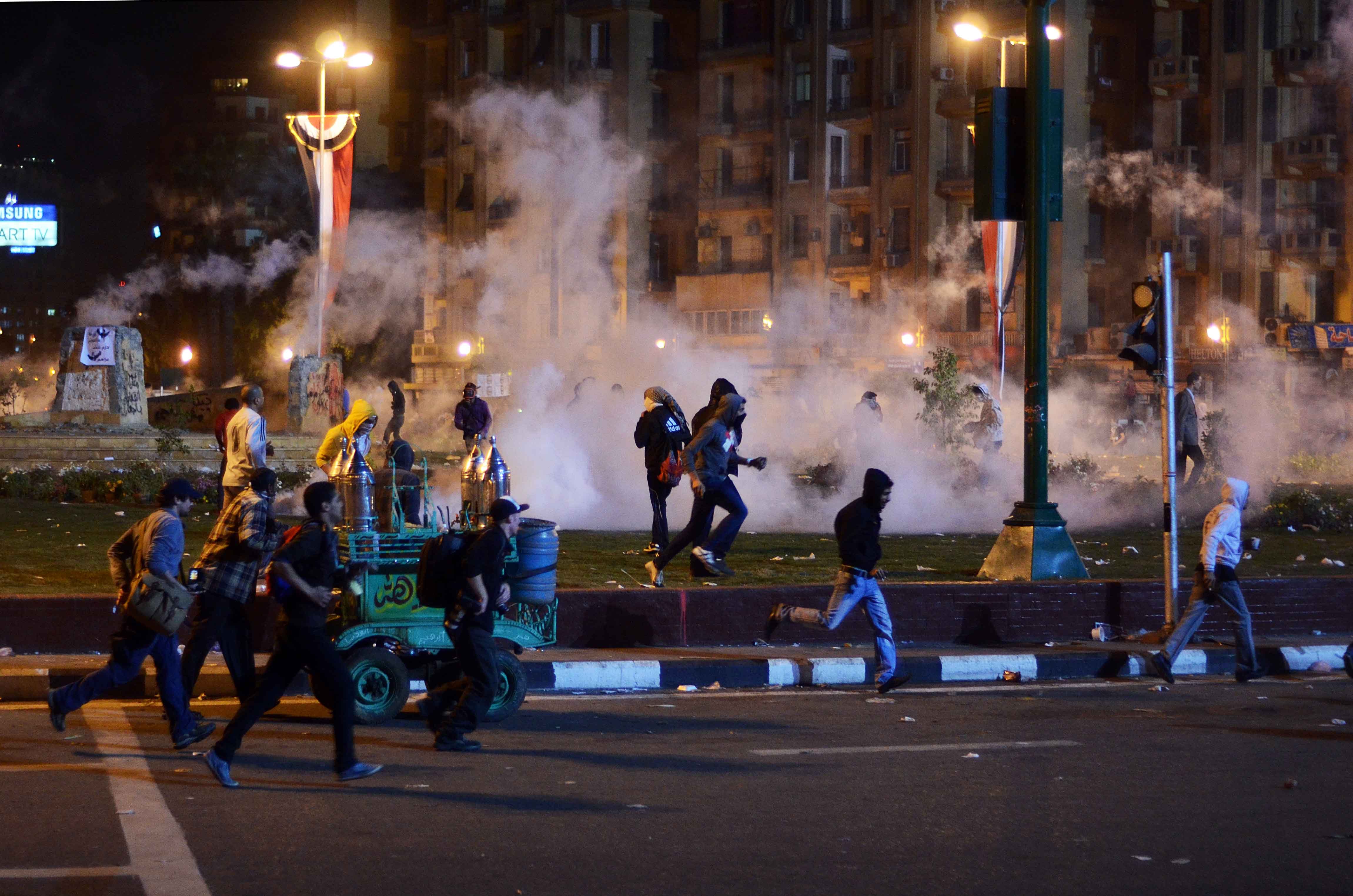 At least two protesters were killed in clashes which erupted in the vicinity of Tahrir Square on Tuesday on the second anniversary of the 2011 Mohamed Mahmoud Street clashes.

Security forces broke into Tahrir Square in the early hours of Wednesday, clearing it of all protesters.

Ahmed Al-Ansary, head of the Egyptian Ambulance Authority, announced that an anonymous 18-year old died at Qasr Al-Eini Hospital from a birdshot wound to the head, reported state-run news agency MENA. Al-Ansary added to state-run Al-Ahram that a 23-year old, Mahmoud Abdel Hakeem, died after being shot in the head. Fifty were also injured as a result of the clashes, including security personnel, according to the Ambulance Authority spokesman.

The FECU Revolution Movement, a student movement at Cairo University’s Faculty of Engineering, said that Abdel Hakeem was a fourth year student at the faculty. The movement published the testimony of other students who allegedly were with Abdel Hakeem at the time he died.

The students claimed they were near Mohamed Mahmoud Street when they saw teargas canisters being fired at Qasr Al-Eini Street.

“We moved towards the scene of the clashes to see what was happening … one of us got a birdshot wound in his arm,” the students’ testimony read. The students claimed they then heard three shots; one penetrated a student’s leg, another landed in Abdel Hakeem’s eye.

Clashes erupted outside the Arab League headquarters near Tahrir Square on Tuesday evening after a group of protesters provoked security forces, according to eyewitness Sherif Hany. Hany said protesters, mostly minors, were chanting against and cursing the Ministry of Interior, pelting rocks and empty bottles at police and army forces standing next to the headquarters. He added that barbed wires separated the protesters from security forces.

Hany retreated from the scene of the skirmishes into Tahrir Square, when he saw teargas being fired at the protesters back at the headquarters. Heading back, Hany said he saw several protesters injured with birdshot; he could not tell where the birdshot was coming from.

In a statement released on Tuesday night, the Ministry of Interior accused a group of “rioters” of attacking and trying to break into the Arab League headquarters. The ministry said protesters broke some of the headquarters’ doors and windows, adding that security forces cordoned the headquarters and were able to protect it from being stormed.

The Ministry of Interior also announced arresting four from Abdel Moneim Riad Square near Tahrir Square. At the time of their arrest, they were allegedly in possession of birdshots, marble shots and live ammunition, three firearms and nine molotov cocktails.

Thousands of rival protesters demonstrated in downtown Cairo on Tuesday to commemorate the second anniversary of the Mohamed Mahmoud clashes in 2011. Tahrir Square was occupied by demonstrators supporting Minister of Defence Abdel Fattah Al-Sisi. Meanwhile, protesters on Mohamed Mahmoud Street chanted against the Muslim Brotherhood, the Supreme Council of the Armed Forces, and the Ministry of Interior.