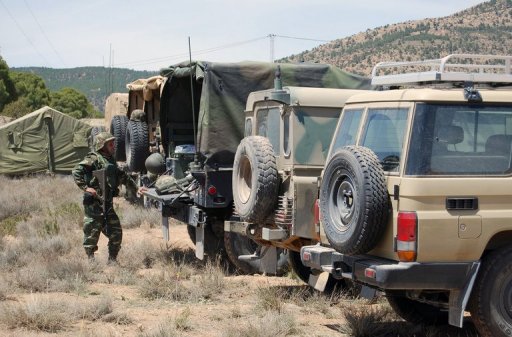 AFP – The Tunisian army on Friday launched a “huge” land and air operation against Islamist militants holed up on a remote mountain near the Algerian border, the armed forces said.

“A huge operation, with ground and air units, was launched at dawn to clean up the mountain,” armed forces spokesperson Taoufik Rahmouni told Mosaique FM radio.

The spokesperson said the assault was mounted after clashes on Thursday night between soldiers and “a terrorist group”, referring to fugitive Islamist militants.

“We have not killed or arrested any terrorists” to date, he said, without being able to give a number for the hunted militants.

A military source on the ground earlier told AFP “the terrorist group is surrounded” in the Mount Chaambi area where eight Tunisian soldiers were slain this week and that helicopters had carried out air strikes.

“Either they give themselves up or they will be killed,” he told AFP.

He said the attack took place around 16 kilometers from the town of Kasserine, near Mount Chaambi, where the soldiers were found on Monday with their throats cut after being ambushed by militants.

Mosaique-FM said the raids were aimed at destroying militant hideouts. Explosions from the air raids were heard in Kasserine.

Tunisian troops have intensified their hunt for gunmen in the Mount Chaambi area since the spring, after several members of the security forces were killed or wounded by explosive devices.