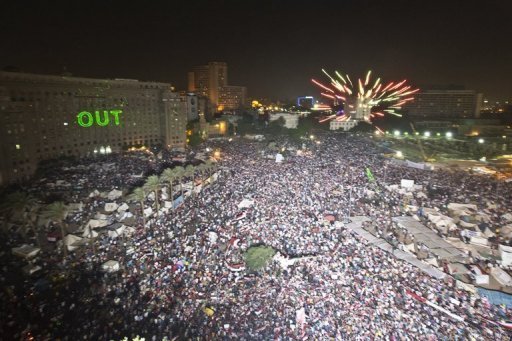 The Presidency released a statement at approximately 4.30pm Wednesday announcing its readiness to form an interim coalition government to run the upcoming parliamentary elections.

The Presidency highlighted a roadmap in which it “responded to the people” and called on national, political, and youth groups to achieve comprehensive national reconciliation that would remove the political tension” witnessed in Egypt.

“The Presidency stresses that attempts to overturn constitutional legitimacy can deviate democracy from its right course and threaten the freedom of expression that Egypt witnessed after the revolution,” the statement read, adding, “Legitimacy is the only guarantee of stability and combating violence and thuggery.”

The Presidency suggested forming a temporary interim coalition government whose members would agree on a Prime Minister; the government would be responsible until the parliamentary elections within a few months, “so that Egyptians can express themselves in ballot boxes.”

The roadmap also included an independent committee for amending the constitution; the proposed amendments would then be presented to the House of Representatives.

The statement held the opposition parties responsible for boycotting previous calls for dialogue and consensus, and claimed that the latest call meets all the demands of the people and “saves the blood of Egyptians.”

“The Presidency calls on all political and national groups to uphold national interests above all others,” said the statement.

It added that all should understand that both supporters and protesters against the regime took to the streets, counting “hundreds of thousands from the two.”

“It’s only fair that the President listens to all crowds in all squares around the country.”

“As for the other scenario that some are trying to impose on the Egyptian people, it is not approved by the Egyptian people who filled Egypt’s street; it will confuse the process of establishing state institutions towards which we started taking the first steps”.

The statement added,  “They are wrong who believe Egypt can go backwards, defy legitimacy and revolution and imposing the ‘power legitimacy’ on the Egyptian people.”