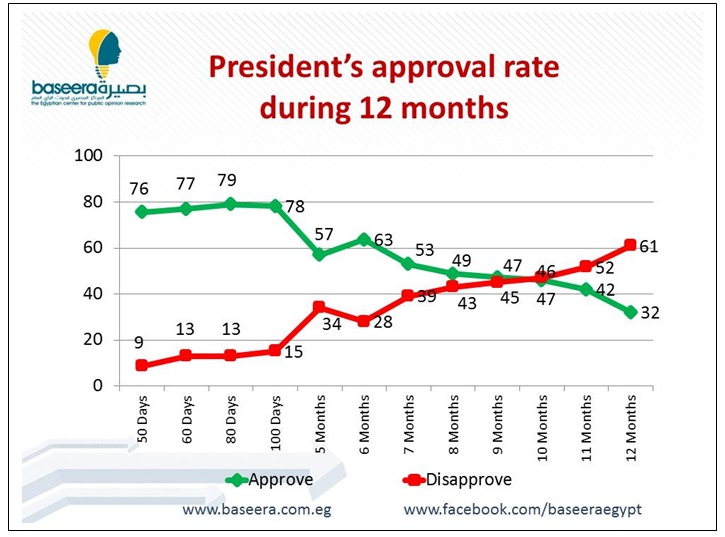 On the occasion of the one-year anniversary of the first term of Egypt’s first post- January 25th president, the Egyptian Center for Public Opinion Research (Baseera) conducted an opinion poll on behalf of Egypt’s Al-Hayat channel, to ascertain Egyptians’ opinions after one year in office of President Morsi and the brotherhood. The opinion poll covered a range of topics related to the president’s decisions and their impact on the lives of citizens.

Participants were asked what they found to be the best and worst decisions taken by the president in his first year in office. Around 73% of Egyptians responding that he has not taken any good decisions, and 6% responding that the best decision taken was that to force into retirement Field Marshall Tantawy and Lieutenant General Sami Anan. About 3% believe that his best decision was the raising of pensions and wages, while the decisions to suspend relations with Syria and dismiss the Prosecutor General each garnered 2%. The decisions to restore ties with other nations, and to make available gas each garnered 1%, in addition to a number of other decisions failed to reach more than 1%.

Regarding the biggest challenges faced by respondents and their families, 35% answered that their greatest concern was rising prices, while 16% cited the lack of security, 14% their inability to find work opportunities, 8% low income levels, 5% power outages, and 3% answered that it was the fuel crisis.

As for the greatest problem facing Egypt, 18% believed it was the absence of political stability, 17% the Nile water issue, 14% the provision of energy, 12% the absence of security, 6% unemployment and 5% national bankruptcy. Around 3% believe that the greatest problem is the provision of subsidies, 3% that it is the Muslim brotherhood and 2% cite the counter-revolution. 1% says that the biggest challenge facing Egypt is the opposition’s weakness, while the remaining proportion all cast their vote for other issues that failed to garner at least 1% of the total.

About 59% of Egyptians believe that if the Military Council had remained in power that the nation’s status would be better by now, while 10% answered that it would be as it is now, 18% that it would be worse off, and 13% were unsure.

Regarding their opinions on the approach of Egypt’s foreign policy Management during President Morsi’s tenure, only 13% rated it positively, while 15% replied that it was average, 50% rated it negatively and 23% said that they were unsure. Half of all Egyptians believe that other nations have influenced Egypt’s internal policies during President Morsi’s tenure, while 22% answered that there had not been any interference from other nations and 28% answered that they did not know. Around 67% of those who do believe that there is foreign interference in Egypt’s internal policies, stated that the state responsible for such interference was the United states, while 27% pointed to Qatar, 23% to Israel, 11% to Iran, 7% to Hamas, 5% to Saudi Arabia, 4% to the Emirates, and 2% to Ethiopia with the remaining respondents pointing the finger at other nations, all of which garnered less than 1%.

The survey was conducted for Al-Hayat Egypt channel using landline and mobile telephones, with a sample size of 2069 respondents ages 18 or older nationwide. All interviews were conducted during the period from 20 to 23 June, 2013. The response rate was approximately 71%. The margin of error was less than 3%. Income brackets were determined based on ownership of durable goods.