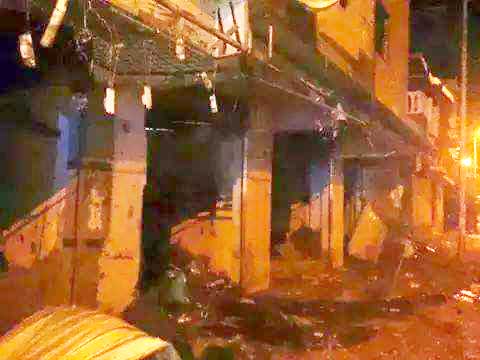 “At 5pm the day ends with the sound of gunshots – a new ritual to remind people that it’s curfew time – and by 7am another round of gunshots informs residents that the curfew has ended,” said the teacher – a mother of two living in Al-Arish, northern Sinai.

Several residents of the town have shared their experiences with the Daily News Egypt of living under curfew. A state of emergency was declared in the area following attacks by militants on 24 October, which left at least 30 army personnel dead. A militant insurgency in Sinai has flared since the military’s ousting of Islamist president Mohamed Morsi in July 2013.

The residents, who all of whom asked to remain anonymous for security reasons, revealed that – even under curfew – explosions are a common occurrence, and the people are living in fear.

The teacher’s six year-old daughter wakes up every night crying and screaming, terrorised by the sounds of explosions and gunfire. A few months before the curfew, the family’s house was shot at when the children were at home alone with their mother. “Since then, the nightmares have never left them,” she said.

Residents often feel the need to report a car or a suspicious bag left in the street but, as the mobile phone networks are frequently cut, it has become difficult. “Even when something gets reported, the response from the army or police is very slow,” said the teacher.

According to a pharmacist in his late twenties, the poor mobile coverage is a protective measure used by the authorities to prevent militants from contacting each other. “However, the government is  unable to take control of the situation even with this precaution,” he added.

An engineer in his mid-twenties however had a different theory, attributing the network cuts to the authorities’ aim of preventing those living outside of the area from knowing what is really going on in Al-Arish.

The mother teaches at a school in Sheikh Zuweid – a Bedouin town near the border with the Gaza Strip – and claimed that she has seen planes bombarding a village in the area known as Al-Toma.

She noted that travelling between towns in the region has become difficult. On 17 November, teachers returning to Al-Arish from Sheikh Zuweid and Rafah had to wait for hours at a checkpoint outside Al-Arish due to suspected explosives on the road. The delays meant they were not able to get home before the 5pm curfew and as a result a 28 year-old teacher was shot in the thigh while passing a security checkpoint later that night in Dahiyat al-Salam neighbourhood of Al-Arish. The man is currently at Al-Arish hospital and his condition is stable, she said. Other teachers were taken from the checkpoint in the Alreesa district in ambulances and military vehicles, not reaching their homes until 7-8pm.

The day after she and a group of teachers met with the governor of North Sinai Abdel Fatah Harhour to find a solution to problems cause by security delays when travelling from Al-Arish to other towns. Two days later, on 20 November, Harhour ordered the indefinite closure of schools in Sheikh Zuweid and Rafah for security reasons.

Even travelling around Al-Arish in the day time has become arduous as security forces frequently set up new checkpoints made of sand, stone, and metal barriers, forcing residents to take longer routes to reach their destinations.

Residents report that travelling from Arish to Cairo and vice versa has become very difficult. A year and a half ago they used to pass over the Suez Canal on Al-Salam Bridge. However, following the increased security threats, people are now often forced to pass the canal via ferryboat. “The lines of cars waiting to pass are endless and more time is consumed because almost every car in the queue gets inspected,” said an Al-Arish housewife.

The financial situation has become challenging for many people in Al-Arish. All types of entertainment have been removed from their lives and they can hardly afford to buy basic necessities. Traders of fruits, vegetables and clothes have raised their prices to cover losses from the early closure of their shops under curfew.

“After 5pm Al-Arish becomes like a ghost town. Places that used to be full of people and shops that were open all night are now dead and no one dares to not abide by the rules,” said a pharmacist living in Al-Arish.People are losing their tempers because of what’s happening. “I am now considering leaving this country for good and the coming days will help me determine whether I’ll stay or leave,” the pharmacist said.

Some residents express a lack of confidence in the ability of the security forces to secure the area.

On 11 November residents stated that they had reported a suspicious car parked in their neighbourhood to the police around 4pm. At 8.30pm the car exploded, before the security forces could investigate, said one of the residents who preferred to remain anonymous.

No one was killed but some sustained minor injuries. Houses and shops sustained significant damage from the explosion. Two shops were completely shattered, buildings around the car were left with cracks and holes and windows were broken.

“I thought that the whole building was being blown up, all the windows in the house were smashed inside falling on beds, sofas and on the floors,” said a housewife and a mother of four living near the place of the incident.

Another housewife shared her view regarding the situation. She implied that things are moving from bad to worse and people are feeling unstable and insecure. “I don’t have a good feeling about what’s currently happening. After the displacement of residents from Rafah I personally think that Al-Arish will be next. I have a feeling that the government is planning to isolate Sinai from Egypt and everyday my doubts get justified even more,” she said.

The housewife is living with her husband and two children near a police station in Al-Arish; security is tight to protect the station from any attacks. She claimed that, if a car passes by the area, the security forces fire their weapons and start screaming at the driver to leave immediately. The woman always parks her car on the other side of the house trying to avoid any kind of panic. “For the same reasons we can’t even get out in our balconies,” she said.

Residents say that the behaviour of the security forces is alienating citizens.

“During the setback of the 1967 war with Israel, when the Israeli army invaded Sinai and occupied Arish, many Egyptian soldiers weren’t able to leave immediately, so they hid in local houses, where residents provided them with food, clothes and even created fake ID’s for them to protect them from the Israeli army. Now things have changed. If a similar situation happened with the new enemy in Sinai, residents wouldn’t respond the same,” said an engineer living in Al-Arish.

“The police and the military are now treating people in a very bad way, the possibility of people being taken to jail for no good reason is very high and it has been actually happening a lot lately,” said the engineer. He claims that innocent people are often arrested in their homes or in the streets.

Another resident shared a story about a neighbour who was taken from his home about a month and a half ago. The resident claims that 10-15 soldiers came to the house next door at 2am and asked for an 18 year-old man who was living in the house. “The sound of knocking and yelling was so loud that people started getting out on their balconies to see what has been going on, but soldiers kept yelling at them, telling them to go back inside. My mother and my sister were crying out of fright and out of pity for the young man and his family.”

“Until now the parents have no clue where their son is; they looked for him at all the police stations in Al-Arish and even in Cairo but couldn’t reach him. I can’t imagine what his family must be going through right now,” the resident said.

“No one is reflecting the whole picture of what is happening in Al-Arish to the external world. Some residents in the town don’t even know what has been going on. The lack of media coverage in Sinai can definitely open the door for more human rights violations,” said the engineer.

According to the teacher, some houses are now being inspected by the army. They approached her brother’s house and asked for his family’s identity cards as well as the contract for his apartment. “He was lucky to be home at the time because if the army finds an empty apartment they smash it down without notice, which happened with his neighbour’s house,” she said.

Yet, while some criticise the military and their actions in Al-Arish, others see this as the right way to handle the current situation. A working father said that, when it comes to national security, the military and Egyptian general intelligence are the only ones who should determine what is to be done. He said that the tunnels found in Rafah between Sinai and Gaza show that the army isn’t just performing carelessly. “They do know what they are doing,” he said.

“My work has been highly affected by the recent events as I’m losing a lot of money but I believe that what the military is doing is all in favour of the people of Sinai and to prevent the city from being separated from Egypt,” the father added.

Hundreds of stories can be told by the people of this small town as every day seems to bring them a new unpleasant adventure. People are actually eager to talk and share their experience, fear, and uncertainty with the outside world.

“Every day I feel like a disaster is about to happen and I only ask God to keep my parents and my children away from any harm, and I hope that I can get back to them safely,” the teacher said. “”Oh, Sinai, where are you headed to?”