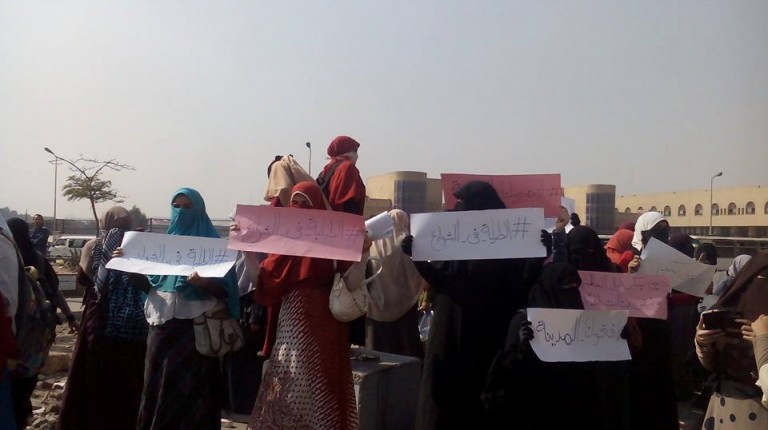 Students Against the Coup (SAC) movement held protests in different university campuses on Sunday condemning “targeting students”, in a new week of demonstrations dubbed “The Right of the Martyr”.

“Although the government is spending millions to turn university campuses into military barracks, and engineering a massive campaign to arrest students, our protests having been gaining more momentum since the first day of school,” said SAC in a Sunday statement.

SAC added that throughout the last two weeks, students have been defying security forces and campus security – including personnel of privately owned security company Falcon.

The group denounced the heavy presence of riot police on campus and held the police responsible for the death of Alexandria University student Omar Al-Sherif, who died on 21 October from head injuries.

Al-Sherif hit by birdshots after riot police stormed into the Alexandria University campus to disperse protests.

Since the beginning of the academic year two weeks ago, university campuses have witnessed clashes between students and security personnel.

The Association for Freedom of Thought and Expression (AFTE) released a report Saturday documenting violations in campuses.

The report said that police stormed nine universities, killing one student, what brought the total count of student deaths on campus to 17 since the last academic year.

“Violations continue as a total of 230 students were arrested since the beginning of school on 11 October,” said AFTE.

On Wednesday afternoon, a bomb exploded in the vicinity of Cairo University, injuring six policemen and four civilians.