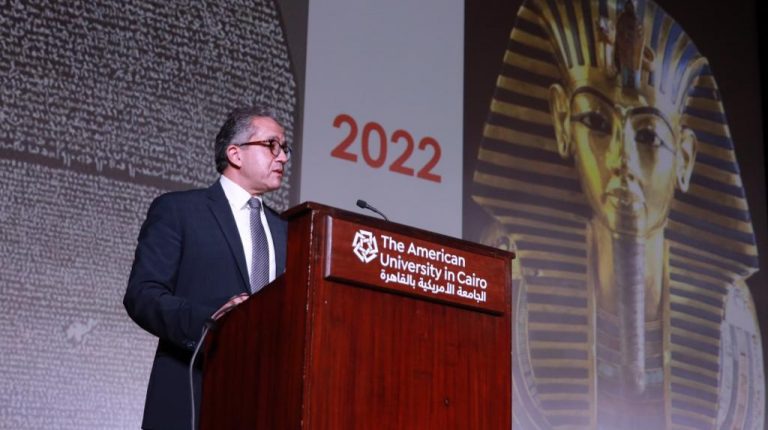 Minister of Tourism and Antiquities Khaled El-Anany said that 2022 will be an exceptional and distinguished year, as it will mark the 100th anniversary of the discovery of King Tutankhamun’s tomb as well as the 200th anniversary of deciphering ancient Egyptian hieroglyphics the inception of Egyptology as a field of academia.

His remarks came during a lecture on the efforts of the Ministry of Tourism and Antiquities in the field of excavations and discoveries, projects for the restoration of antiquities, the development and construction of museums, and the recovery of smuggled artefacts in the Ewart Hall at the American University in Tahrir.

The lecture was attended by Ahmed Dalal — the President of the University — a number of ambassadors, public figures, university professors, students, and the family of diplomat Nadia Younes.

During the lecture, El-Anany highlighted in his presentation the most prominent achievements of the Egyptian state in preserving its cultural heritage and the recent inaugurations and archaeological discoveries that the state is working to complete.

He began his speech by informing the attendees about the Egyptian archaeological sites that are registered on the World Heritage List, in addition to informing them about the latest most important archaeological discoveries, including the discovery of the tomb, a beautiful oasis in Saqqara, and the sarcophagi of Saqqara — which numbered more than 150 sarcophagi and other important discoveries in Minya, Luxor, Cairo, Giza, and others.

El-Anany also highlighted the latest inaugurations of new museums and antiquities projects, including the opening of the restoration project of the Step Pyramid of Djoser and its southern cemetery in Saqqara — two of the sites on the World Heritage List — and the opening of a large number of museums such as the National Museum of Egyptian Civilisation, Sharm El-Sheikh Museum, and the Royal Vehicles Museum in Bulaq after the completion of its development and other museums in Kafr El-Sheikh, Hurghada, Tanta, Minya, the two museums of Cairo International Airport, and others.

The minister also shed light on the Grand Egyptian Museum, which is highly anticipated by the whole world and will be the largest museum in the world to feature one civilisation; Ancient Egypt.

Additionally, El-Anany talked about the features of the media strategy for tourism promotion in Egypt, which was prepared by an English-Canadian alliance and aims to show Egypt as a young and vibrant destination while highlighting its various and diverse tourism components.