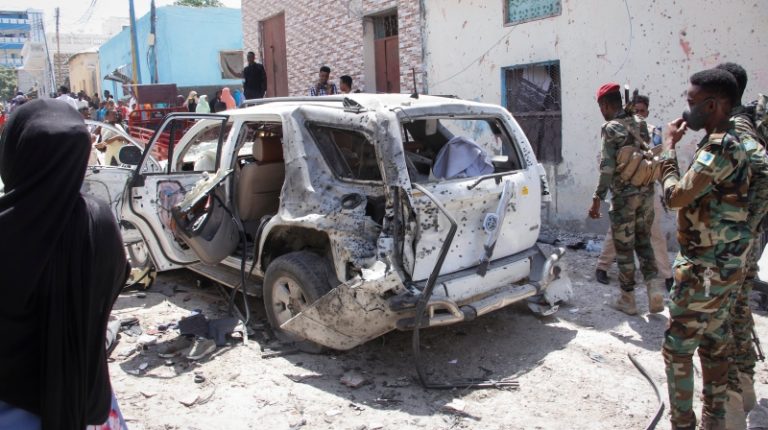 Roble said Moalimuu, a former journalist who sustained wounds during the midday attack at Dabka intersection in Mogadishu, is in stable condition.

“The prime minister wishes Moalimuu quick recovery,” Roble’s office said in a statement after Moalimuu, a government spokesman based at the office of the prime minister, survived the attack after a suicide bomber detonated explosives behind Moalimuu’s vehicle.

Abdifitah Aden, the police spokesman, told journalists the government official who was alone during the incident, escaped with slight injuries and is recuperating at a hospital in Mogadishu.

Aden said there are no other casualties in the latest incident for which the al-Shabab militant group has claimed responsibility.

“The suicide bomber blew himself up behind the government spokesman’s vehicle which was extensively damaged. Nobody else was injured apart from Moalimuu,” Aden said.

It is the fourth attempt on Moalimuu’s life after he survived three other such attacks in the past in the country while working as a journalist.

The latest attack which also destroyed parts of the buildings near the scene comes after Moalimuu had announced his candidature for a parliamentary seat in the country.

The Somali forces backed by the African Union Mission in Somalia drove al-Shabab out of Mogadishu in 2011, but the terror group is still capable of conducting attacks, targeting government installations, hotels, restaurants and public places.

The Somali government said it has launched an investigation into the recent military airstrikes which destroyed telecoms masts and paralyzed operations of a telecoms company in the southern region.

The Ministry of Defense condemned such strikes in Jubba and Gedi regions which destroyed the towers operated by Hormuud Telecom, the country’s largest telecoms service company.

“The Somali government is disappointed for any harm done to its citizens and we share our concerns to this company for the loss of its business which has been repeated,” the ministry said in a statement issued in Mogadishu, the capital of Somalia, Saturday evening.

The airstrikes were carried out Tuesday in the vicinity of Jilib, a region which is the stronghold of al-Shabab in the Middle Juba region. The exact details of the airstrikes which destroyed some buildings and telecoms towers were not provided.

The ministry said that it’s in direct contact with African Union Mission in Somalia (AMISOM) and other partners assisting the government in security operations to share its concerns and find out what is happening in the two regions.

“The Somali government is conducting a formal investigation into these recurring incidents of violence against the Somali people,” the ministry said.