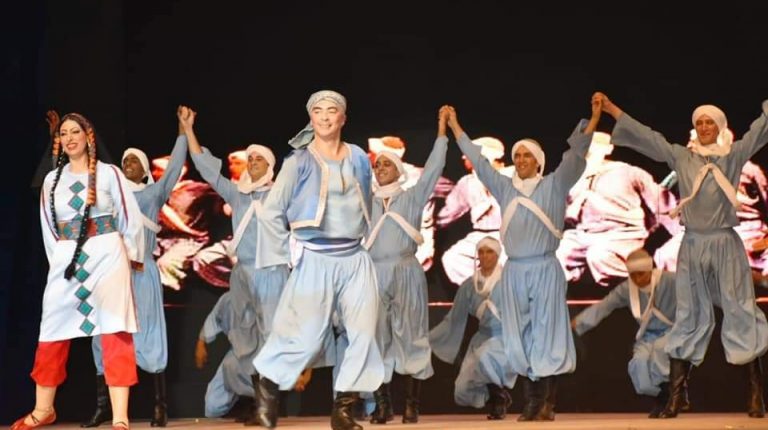 Minister of Culture Inas Abdel Dayem attend the opening ceremony, saying that honouring outstanding creators is a form of gratitude and a sign of faith in their role in developing the nation and collective conscience.

The performances are designed to celebrate the work of pioneering Egyptian folkloric dance icon and founder of the renowned Reda Troupe, Mahmoud Reda, who passed away in July at the age of 89.

Abdel Dayem said that the Reda Troupe has become a guardian of the country’s heritage and a worldwide ambassador of Egyptian art.

She added that Reda has become an immortal legend through his successful and honest expression of the Egyptian spirit and identity. It was through his range of work in which his genius in design and distinctive dynamic performance came to the fore.

The celebration is directed by Adel Abdu, accompanied by the orchestra of Conductor Hisham Nabawy. It features singers Mohamed El-Helw and Mai Farouk in Wahed Mennena (“One of Us”), a song written by Medhat El-Adl and composed by Salah El-Sharnouby.

It also includes an exclusive video, an act by Mido Adel, and a documentary by journalist Ayman El-Hakim with the event presented by Bosy Shalaby.

Born in 1931, Reda participated as an athlete on the Egyptian national team at the 1952 Summer Olympics in Helsinki. He founded the Reda Troupe in 1959, finding widespread success that led to the troupe’s official adoption by the Ministry of Culture in 1961. Such was the troupe’s success, that it went on to perform all over the country, and at many important venues abroad.

The Reda Troupe collaborated with numerous musicians and starred in many films, including Agazet Nos Al-Sanah in 1961, which was directed by his brother Ali Reda. The troupe also featured in other films, such as Gharam fi Al-Karnak in 1967, and Harami El-Waraqa in 1970. Mahmoud Reda worked with the troupe until he retired in 1990, although he continued to supervise it artistically.

Swiss Christmas fair 2019 to kick off in Egypt on Friday