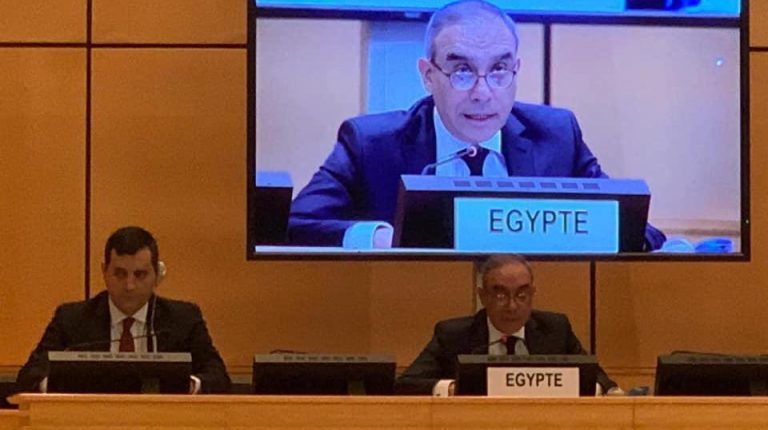 He said in a press statement on Saturday that Egypt has pledged to implement these recommendations within the next four years.

At the UNHRC’s 43rd session in Geneva on Thursday, the council adopted the outcome report of Egypt’s universal periodic review (UPR), which highlighted the state’s “constructive and committed cooperation” with international recommendations and pledges.

During Thursday’s session, the member states praised Egypt’s efforts and response to most of the recommendations.

The UNHRC rated the Egyptian government as the council’s most powerful member, and the report considered Egypt as one of its most cooperative states.

Abed noted that out of 377 recommendations, Egypt has completely approved 270 and partially approved 31. This confirms that Egypt is determined in advancing its record in the rights and freedoms of Egyptian citizens.

Abed also said that Egypt’s approval of so many recommendations comes after the state’s establishment of an independent committee that will follow up each recommendation’s implementation, which will include the oversight of ministries, institutions, and civil society.

This is the third time Egypt has been reviewed under the UPR mechanism. the last two being in 2010 and 2014.

According to a recent report issued by the UNHRC, Egypt has reviewed its own mechanism to implement the recommendations, mainly through the establishment of a national committee made up of all concerned state and nongovernmental bodies.

The UPR is a mechanism by which the UNHRC reviews the human rights condition of member states every four years.

In November’s 2019 report, out of the 300 recommendations that the government received, the state has fully accepted 224 and partially accepted 23, and rejected 23 due to their incompatibility with the Constitution.

Egypt is one of the 14 states currently under review by the UPR Working Group.

Egypt to present report on human rights before UPR in Geneva