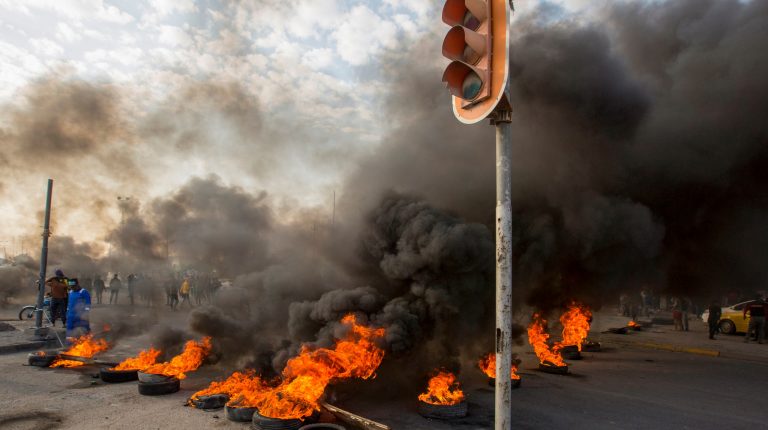 At least five Iraqis were killed and dozens were injured on Sunday, when security forces fired rubber bullets and tear gas to disperse protests in Basra and Nasiriyah cities, said Agence France-Presse.

Three protesters were shot dead and more than 71 were wounded in Nasiriyah, when the riot police fired live bullets and tear gas on the protesters. In addition, three were killed and 87 were wounded during clashes which took place in Basra’s Umm Qasr port.

The clashes started late Saturday when protesters in Nasiriyah defied the ministerial directive to reopen schools after one-month closure. The protesters blocked three main bridges and burned tyres outside some public facilities.

Meanwhile, riot police re-opened a main road in the capital Baghdad, after clashing with the protesters who blocked which left 12 injured and one dead.

Sunday’s violence came a day after the United States Vice President Mike Pence’s surprise visit to Iraq, where he greeted US troops a head of the thanksgiving holiday.

During his visit, Pence flew to Al Asad Air Force Base in Al Anbar governorate western Iraq, where he spoke with Iraqi Prime Minister Adel Abdul-Mahdi via telephone rather than meeting him in person.

Pence met with President of Kurdistan region of Iraq, Nechirvan Barzani, in the city of Erbil, northern Iraq, and said the visit aimed at showing US appreciation for Kurdish allies.

Pence told Barzani the visit was meant to reiterate the “strong bonds forged in the fires of war between the people of the United States and the Kurdish people across the region.”

Commenting on the US withdrawal in Syria, Pence said “I don’t think that there is any confusion now among the leadership here in the Kurdish region that President Trump’s commitment to our allies here in Iraq as well as to those in the Syrian Democratic Forces, the Kurdish forces who fought alongside us, is unchanging.”