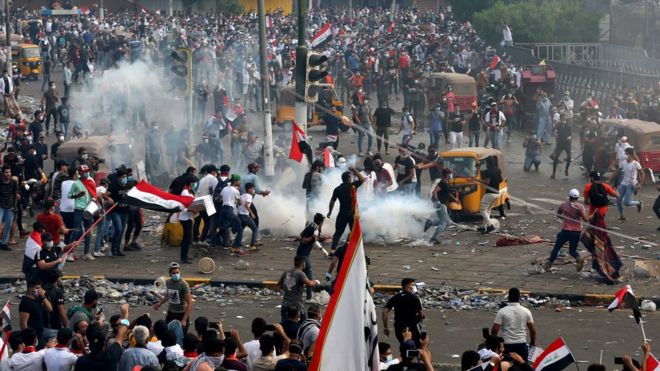 At least six protesters were killed and dozens were wounded by Iraqi forces, defying the Iraqi prime minister’s calls to end the protests, and gathered in central Baghdad and other locations on Monday, Reuters reported.

The medical sources said that four protestors were killed while 34 were wounded, adding that one was killed by live fire, and two by rubber bullets and tear gas, but did not explain the fourth death.

The clashes between protests and the Iraqi forces continued on Tuesday in the main Gulf of Port Umm Qasr. During riot police attempts to disperse demonstrators, one person was killed and police injured several others, leading health care providers in Basrah governorate to call upon residents to donate blood to help the injured, said Sky News.

On Sunday night, Prime Minister Adel Abdul Mahdi urged protesters to suspend their movement which he said achieved its goals and was hurting the economy. However, thousands of anti-government protesters also gathered in Umm Qasr and southern Shatra, where security forces also killed a protester, and wounded around 10 people.

Meanwhile, the tribes in the Iraqi city of Karbala had given the Iraqi government on Monday evening 72 hours to hand over the killers of Karbala’s demonstrators. This demand came after three protesters were killed in Karbala late on Sunday when security forces opened fire on a crowd trying to storm the Iranian consulate.